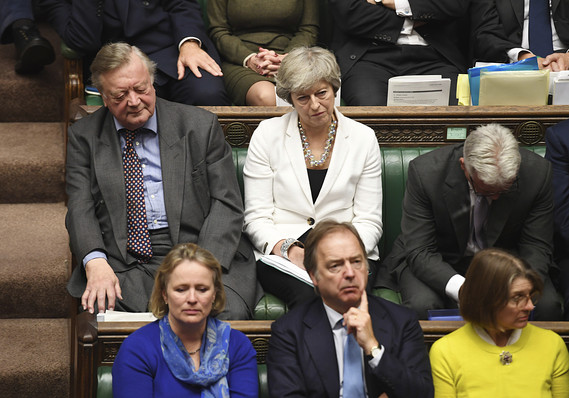 Associated Press
Former Prime Minister Theresa May, top centre, and Father of the House lawmaker Ken Clarke, listen to Britain's Prime Minister Boris Johnson as he gives a statement to lawmakers inside the House of Commons to update details of his new Brexit deal with EU, in London Saturday Oct. 19, 2019. At a rare weekend sitting of Parliament, Johnson implored legislators to ratify the Brexit deal he struck this week with the other 27 EU leaders.

Former Prime Minister Theresa May, whose Brexit deal was rejected by Parliament three times, says she is backing the agreement struck by her successor Boris Johnson.

May told lawmakers she had a “distinct sense of deja vu” as Parliament debated whether to back Johnson’s EU divorce deal. She resigned in frustration after lawmakers repeatedly threw out her Brexit agreement.

Johnson’s deal is similar to May’s in some ways but contains a different arrangement for maintaining an open Irish border.

May said Parliament should pass the deal and let Britain leave the EU on Oct. 31. She said “people want certainty in their lives. . If you want this country to move forward then vote for the deal today.”