Stage set for Senate impeachment proceedings to stretch into the wee hours — when, Democrats say, fewer Americans are likely to be watching

WASHINGTON (AP) — Senate Majority Leader Mitch McConnell on Monday proposed a condensed, two-day calendar for each side to give opening arguments in President Donald Trump’s impeachment trial, ground rules that are raising objections from Democrats on the eve of the landmark proceedings.

The Republican leader outlined the process in a four-page resolution that will be voted on as one of the first orders of business when senators convene Tuesday. It also pushes off any votes on witnesses until later in the process, rather than up front, as Democrats demanded.

‘Senators must honor their own oaths by holding a fair trial with all relevant evidence.’

After the four days of opening arguments — two days per side — senators will be allowed up to 16 hours for questions to the prosecution and defense, followed by four hours of debate. Only then will there be votes on calling other witnesses.

McConnell has been angling for a speedy trial toward acquittal of the charges against the president, and the closely held rules package arrived Monday after Trump’s legal team asserted in a legal brief that he did “absolutely nothing wrong,” urging the Senate to swiftly reject the “flimsy” and rigged impeachment case against him.

The brief from Trump’s lawyers, filed ahead of opening arguments, offers the most detailed look at the lines of defense they intend to use against Democratic efforts to convict the president and oust him from office over his dealings with Ukraine. It is meant as a counter to a filing two days ago from House Democrats that summarized weeks of testimony from more than a dozen witnesses in laying out the impeachment case.

“All of this is a dangerous perversion of the Constitution that the Senate should swiftly and roundly condemn,” the lawyers wrote. “The articles should be rejected and the president should immediately be acquitted.”

The 110-page brief from the White House, plus the House Democratic response, come as the Senate is considering 12-hour opening sessions for the rare trial taking place in an election year, with some of the very senators running to replace Trump as president sitting as jurors.

The White House filing shifted the tone toward a more legal response but still echoed with campaign-style slogans. It hinged on Trump’s assertion he did nothing wrong and did not commit a crime — even though impeachment does not depend on a material violation of law but rather on the more vague definition of “other high crimes and misdemeanors” as established in the Constitution.

With security tightening at the Capitol, the House prosecutors made their way on Monday through crowds of tourists in the Rotunda to tour the Senate chamber. The White House legal team led by Pat Cipollone and Jay Sekulow soon followed, both sides under instructions to keep the chamber doors closed to onlookers and the media. Four TV monitors were set up inside to show testimony, exhibits and potentially tweets or other social media, according to a person familiar with the matter but unauthorized to discuss it who spoke on condition of anonymity.

Senators are poised for only the third trial of its kind in U.S. history, but first they must contend with a rules fight and whether to allow new witnesses. 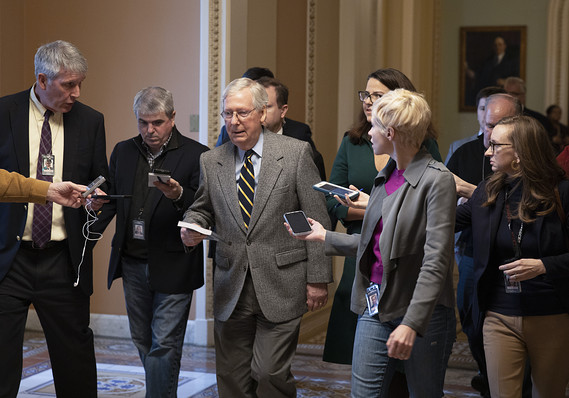 The GOP leader had been expected to propose a condensed schedule for opening arguments with two 12-hour days for each side, the person said. Democrats warned that such a plan would almost certainly push the proceedings into hours when Americans may not be watching. The White House legal team said Monday it supports whatever package McConnell puts forward.

In their own filing Monday, House prosecutors replied to Trump’s not-guilty plea by making fresh demands for a fair trial in the Senate.

“President Trump asserts that his impeachment is a partisan ‘hoax.’ He is wrong,” the prosecutors wrote.