Meatless menu items are also available at Del Taco, McDonald’s, White Castle and Little Caesars, but not everyone believes they’re healthier than meat

The fast-food chain is rolling out the plant-based products at more than 7,000 locations with the expansion of meatless Whoppers from Impossible Foods, the California-based company that makes plant-based substitutes that look and taste like meat and dairy products. The goal, the chain said, is to give meat eaters and “flexitarians” who eat mostly vegetables a bite out of an alternative protein.

Burger King /zigman2/quotes/202094900/composite QSR -0.60%   will start serving the plant-based patties everywhere in the U.S. starting Aug. 8. The national rollout comes on the heels of its successful test run selling the plant-based patties in St. Louis in April before expanding to other markets. The meatless burger is $5.99, around a dollar more than the regular Whopper with meat.

Burger Kings national expansion is paving the way for other chains to continue devouring the meatless market. In June, California-based Tex-Mex chain Del Taco sold two million of its meatless tacos made with a plant-based substitute from Beyond Meat /zigman2/quotes/211617595/composite BYND -0.95%  two months after the launch. It was so well-received, the chain has decided to roll out meatless burritos.

The West Coast eatery joined the likes of Little Caesars and White Castle as consumers continue to crave alternative protein.

Meatless fast food may not be healthier, but it sells

Del Taco’s new Beyond Meat menu items include the Beyond 8 Layer Burrito ($4.49) and the Epic Beyond Cali Burrito ($6.49). Both will include Beyond Meat crumbles, tomatoes, guacamole, sour cream, and the Beyond 8 Layer will also come with beans, red sauce, lettuce and sour cream. The Epic Beyond Cali Burrito will be loaded with Del Tacos fries and pico de gallo salsa.

Del Taco currently sells the Beyond Taco for $2.49, $1 more than its beefy counterpart. But nutritionists say it has a very similar nutritional value compared to a regular taco. Both are 300 calories and contain nearly the same amount of fat and saturated fat. The Beyond Taco, however, contains 100 more milligrams of salt.

The alternative meat market is booming, with plant-based fake meats that look, taste and bleed just like the real thing taking over grocery stores and fast food restaurants. Part of the appeal for diners is that eating less red meat can cut the risk of heart disease and other health risks. But nutritionists and registered dietitians say ordering a meatless burger at a chain — especially one where you can get fries with it — might not be that much better for you.

“Are they healthier as far as sodium, calories and fat content? Definitely not,” Sharon Zarabi, a registered dietitian and bariatric program director at Lenox Hill Hospital, told MarketWatch. 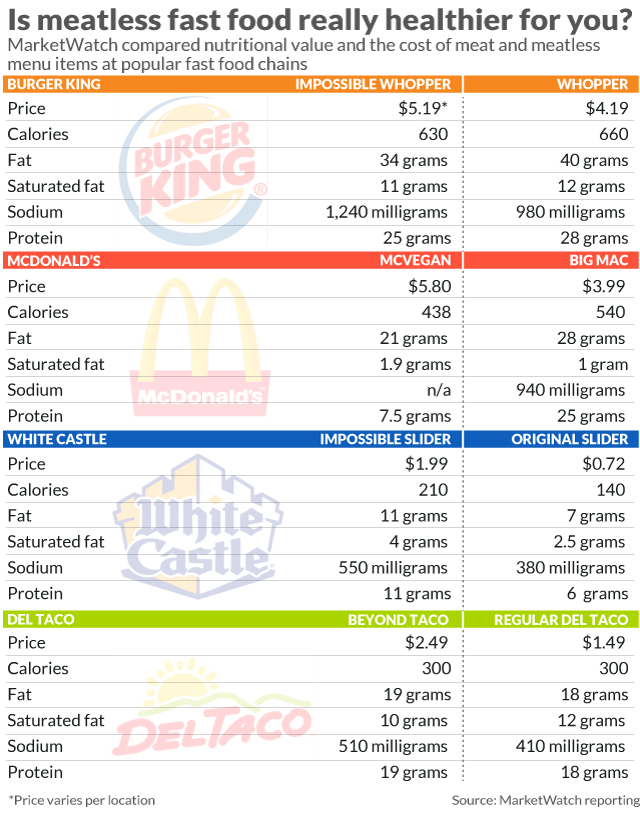 At Burger King, the meatless Impossible Whopper is 630 calories, compared to the regular Whopper which is 660. (The Impossible burger is made with soy protein, potato protein, coconut oil, sunflower oil and heme, a molecule that makes it look and bleed like real meat).

“It’s almost the same amount of calories as the regular burger. The fat is slightly lower, but the saturated fat is still pretty high,” notes Zarabi of the saturated fat, which is almost the same exact amount in each. Consumers can expect to pay at least $1 more for the Impossible Whopper ($5.19), with prices varying by location. In the Bay Area, the meatless Whopper is selling for $6.19 before tax, compared to $4.19 for the original version, according to FastFoodMenuPrices.com . (Burger King did not respond to a request for comment.)

‘Our goal is to make food that is at least as nutritious as the animal-derived versions.’

Impossible Foods doesn’t seem to be trying to make a product that’s necessarily healthier. In fact, a spokeswoman said the company’s focus is on matching the nutritional value of meat. “Our goal is to make food that is at least as nutritious as the animal-derived versions,” Rachel Konrad, a spokeswoman for Impossible Foods, told MarketWatch in an email.

Is America ready for the McDonald’s McVegan?

Other fast food eateries have experimented with plant-based proteins on a limited basis.

McDonald’s launched a McVegan sandwich, a vegetable-based vegan burger made with soybeans, in 2017, but only in Finland and Sweden. This spring, it added a burger called the Big Vegan TS — made with a patty by Nestle /zigman2/quotes/210131093/composite NSRGY -0.80%   — to menus in Germany. Nestle has said it wants to start selling a meatless burger at U.S. retailers this fall and it’s looking to expand its restaurant partnerships beyond McDonald’s, Reuters reported . A rep for McDonald’s did not immediately return a request for comment.

Chick-fil-A has been studying vegan meat substitutes, according to Business Insider , and a spokeswoman for the Georgia-based chicken sandwich chain hinted to MarketWatch that the company could be coming out with a meatless variety in the future, but would not give any further details. “The culinary team at Chick-fil-A is always exploring new trends and possible menu offerings for our customers, and we are still in the early phases of the development process. We currently offer several vegan options for our guests,” Leigh Jackson, a spokeswoman for Chick-fil-A told MarketWatch in an email. (The chain’s hash browns and waffle fries are vegan, among other items .)

Wendy’s /zigman2/quotes/204070192/composite WEN 0.00%   tested a black bean vegetarian burger (which customers could turn into a vegan burger by ordering it without cheese) in 2016, but discontinued the item. Wendy’s did not respond to a request for comment.

Beware of the ‘health halo’

Dr. Lisa Young, a registered dietitian and author of “Finally Full, Finally Slim,” says meat alternatives become even more unhealthy when you factor in the bread, condiments and French fries that typically round out a fast food meal.

“They often come with white bread, cheese and who knows the oil that they’re grilling in it,” Young said. Another concern: the so-called “health halo” effect. Research has shown that when people eat food they perceive to be healthy, they tend to over-indulge later . Many people perceive meatless foods as being better for them, so they could be inclined to consume more calories later in the day after they eat a meatless meal.

“People get tricked by the ‘health halo’ effect,” Young said. “If they contain similar calories, a similar amount of saturated fat and sodium, not only are you not better off, but you might actually be worse off. If you have one of these meatless burgers, you might think, ‘I can have pizza for dinner.’”

Fast-food restaurants seem to be in a frantic game of catch-up adding meat substitutes to their menues. The market for plant-based of lab-made meat substitutes could swell to $140 billion in the next 10 years, Barclays said recently. The May IPO for Beyond Meat /zigman2/quotes/211617595/composite BYND -0.95%   –– the maker of the Beyond Burger and the meat inside Del Taco’s Beyond Taco –– made history, with shares surging from $46 to $65.75 for a 163% gain.