Author Elana Mugdan is four months away from claiming the prize 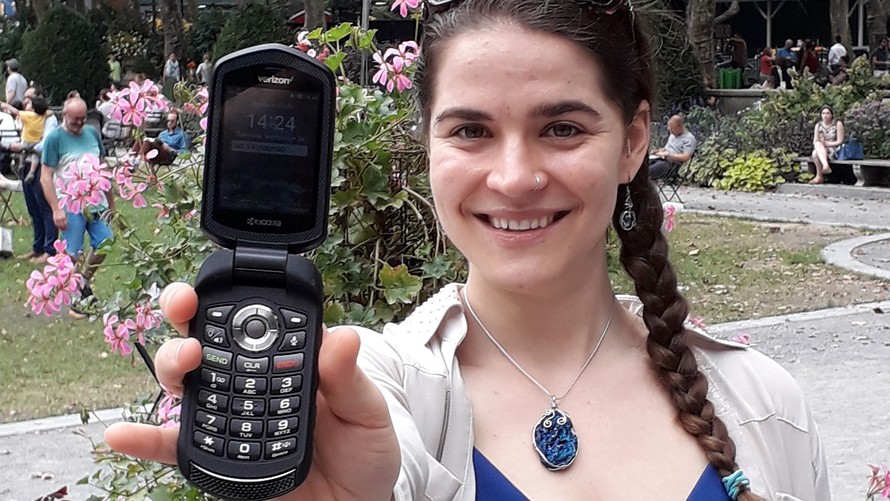 She’s single, in debt, and recently moved back in with her parents in Queens, N.Y. She works part-time jobs while writing fantasy novels . She’s blocked the president on Twitter /zigman2/quotes/203180645/composite TWTR +0.34% and, despite her parlous financial condition, she hopes to eventually be in a position to donate to a charity fighting global warming.

“I [will] have to take a lie detector test,” she says. “Because I’m an extremely anxious person, I’ve been very rigid with the rules.”

Last winter, Mugdan won the “No Phone For A Year” contest run by Coca-Cola’s Vitaminwater. She’s agreed to go a year without using a smartphone or any similar device, like a tablet. She’s stuck with a flip phone.

She’s two thirds of the way through the challenge: It began in February. She’s looking good for the payoff. “I’ve detoxed completely from the smartphone and I don’t need it,” she says. “The biggest challenge I’ve faced in the contest is other people pushing their phones at me. People are always trying to show me their phones.”

“I’ve come to a decision: I do not want to go back to the smartphone when the year is over,” she says. “I have become 125% more productive without it. This year alone I’ve read 30-plus books. [It’s] made me a lot happier, and it’s improved my sleep schedule. I’m trying to repair some of the relationships that I let fall by the wayside. I’ve made an effort to reconnect with people.”

When she looks back on her smartphone use, she is aghast. “I was wasting time. I was basically doing nothing. I wasn’t aware of how badly I was behaving with my smartphone until I had to relinquish [it]],” she says. “I was addicted to it. I definitely abused it.”

She checked it out throughout the day, and kept the phone by her bed at night. Sometimes when she couldn’t sleep she’d be on her phone instead until 4 a.m.

She was hardly alone. Growing numbers of adults, and children, are hooked on their smartphones. Scientists are increasingly worried about the social and mental toll that’s taking. Even Apple /zigman2/quotes/202934861/composite AAPL +0.48%  CEO Tim Cook has admitted publicly to spending too much time on his iPhone.

It’s one thing to go without a smartphone if you don’t stray far from your neighborhood. But Mugdan recently went on a cross-country book tour to promote Dragon Child , the latest novel in her fantasy series.

“I generally have treated it as an adventure,” she says. “I’ve been printing instructions. I’ve been planning ahead, which I never really had before.” But, she acknowledges: “I’ve run into situations where it would have been much better for my personal safety if I had a smartphone.”

It’s fewer than 13 years since Steve Jobs unveiled the first iPhone. But smartphones are now so ingrained in our life that, when Mugdan tells people she’d dumped hers, they are typically stunned.

“People are floored,” she says. “The first reaction is invariably shock; ‘What, no phone? I could never do that.’ But it very quickly becomes, ‘I wish I could do that.’”

The last eight months has been a roller-coaster ride, she admits. First was the “honeymoon period,” when she felt refreshed and liberated. Then came the book tour, when she appreciated all that she was missing. Now her view is more balanced: She sees the conveniences of smartphones, but also their hefty costs.

“The technology is so useful when it’s used correctly,” she says. “The problem is, I didn’t use it correctly, I abused it, and I suspect most other people do the same. You sacrifice a lot of freedom, privacy, individuality and thinking abilities for this small bit of convenience.”

For Coca-Cola, it’s been a cost-effective publicity stunt. It’s been “absolutely a success,” says company spokeswoman Aly Hite. For a trivial sum, the company got more than 100,000 contest entries, tons of media coverage, and a “25,000%” increase in web traffic to the brand’s website.

Mugdan, however, is not one of those people. She checks things like email and Facebook /zigman2/quotes/205064656/composite FB +0.81%  only periodically on her laptop. When she goes out now, she is struck by how many people have their eyes glued to their phones, checking their notifications, even when they are in restaurants or cafes with other people.

The emails and notifications will still be there if you don’t check them till later, she points out. “But if you miss a moment in the real world, it’s gone forever.”

Occasionally, she regrets all the time wasted. “Just three hours a day of doing nothing. That’s nearly 1,100 hours. I could have written a book in that time. But it’s past, and I can’t do anything about it.”