Americans are giving record amounts to charity, but that’s masking a worrisome trend 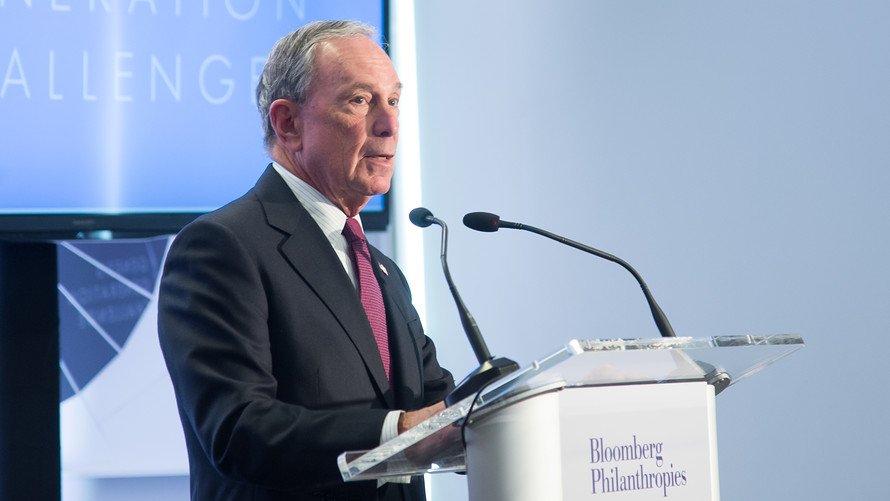 Former New York City mayor Michael Bloomberg’s $1.8 billion donation to Johns Hopkins University has made headlines for its sheer size — it’s the biggest gift ever to a single institution.

The money, to be used for financial aid, will let the school open its doors to qualified students who otherwise couldn’t afford to attend. But to some the donation is a symptom of a troubling trend in American philanthropy.

‘It’s almost like a dangerous distraction to keep thinking that the billionaires are going to solve our problems.’

Those donations are, of course, a good thing on their face — more money going to worthy causes — but to many observers they’re the latest examples of a how income inequality has affected charitable giving. Even though Americans gave a record amount of money to charity last year ($410.2 billion, up 5.2% on the year before) that giving was lopsided, according to a report released Monday by the Institute for Policy Studies, a progressive Washington, D.C., think tank.

“These giant megagifts mask the fundamental, underlying problem, which is that donations by low- and middle-income givers are steadily going down, and almost all the growth in giving is at the very top,” said Chuck Collins, a co-author of the IPS report.

Here’s why it matters that a lower percentage of middle-income people are giving to charity:

Why would a record amount of money flowing to charities be seen as a bad thing?

Because the priorities of these ultrawealthy donors are markedly different from those of the public at large, Collins said. Less well-off households tend to focus their charity donations on local efforts to alleviate poverty, improve social welfare and community mental health, and youth programs like Boys and Girls Clubs. The ultrawealthy tend to be more interested in high-profile gifts to higher education and cultural groups that come with news coverage and, sometimes, their names on buildings, Collins said.

In fact, despite the record amounts of money being donated to charities, there’s not a correspondingly large amount of money going to help the neediest among us. Last year, the two biggest categories of charitable giving were religion (which got 31% of all charitable dollars) and education (14%). In third place (12%) was “human services,” the category that includes food banks, homeless shelters, poverty relief and other front-line assistance, according to the 2018 Giving USA report.

See also: Catholics lash out at church leaders with their wallets

Though Americans typically think of charitable donations in keeping with the historical meaning of charity — alms giving to assist the poor — that’s not the reality, said Stanford University political science professor Rob Reich. “In the U.S., most charity doesn’t go to assist the poor, and the more money you have, the less likely you are to give to the poor or disadvantaged,” he said.

Reich’s new book “Just Giving: Why Philanthropy is Failing Democracy and How it Can Do Better” is one of several recent works to cast a critical eye on the outsized influence the ultrawealthy exert in American philanthropy, while doing relatively little to address the underlying conditions of income inequality.

Billionaires can’t save us

Of course, Bloomberg’s gift will open doors to an elite education for thousands of students. And through his foundation, Bloomberg Philanthropies, the former mayor has allocated millions toward addressing economic mobility, climate change and public health issues.

But as Bloomberg noted when he announced the Johns Hopkins gift, he attended the Baltimore university in part because he received a taxpayer-funded National Defense student loan — a reminder of a time when public investments in higher education were more common, Collins said. Collins said he worries that Americans could get too used to billionaires stepping in to solve problems that government once did.

“It’s almost like a dangerous distraction to keep thinking that the billionaires are going to solve our problems,” Collins said.

Bloomberg identified a pressing problem in announcing his donation, writing this in a New York Times opinion piece: “No qualified high school student should ever be barred entrance to a college based on his or her family’s bank account.”

For Johns Hopkins applicants, that problem is solved, but bringing that benefit to a wider swath of Americans will require policy changes, Reich said. “His gift might make that less likely because it can signal to institutions of higher education or legislatures, we don’t need to solve this problem, we’ll let philanthropists take care of it,” Reich said.

Bloomberg Philanthropies did not respond immediately to a request for comment.

Charitable donations are generally tax-deductible and will cost the U.S. government $750 billion in lost revenue over the next 10 years, IPS found, citing U.S. Treasury estimates. “We forget that this level of philanthropy is subsidized by we, the taxpayers,” Collins said. “You and I chip in 37 cents to 57 cents of every dollar that a billionaire gives in the form of lost tax revenue.”

Donor-advised funds, also known as DAFs, allow people to set aside a chunk of money for charity — and take that amount off their taxable income — without specifying exactly which nonprofit it will go to or when they’ll get the money. That means wealthy individuals can claim a tax break when they put money into a DAF, but charitable groups may wait indefinitely to actually get the money.

“While huge amounts of wealth are transferring to the charitable sector, that money is not trickling down to solve problems,” Collins said.

IPS is recommending that Congress tweak the tax code to put in place deadlines for when money allocated to donor-advised funds must actually reach charities.