Owner of Edenville Dam, which breached, had been cited for non-compliance issues 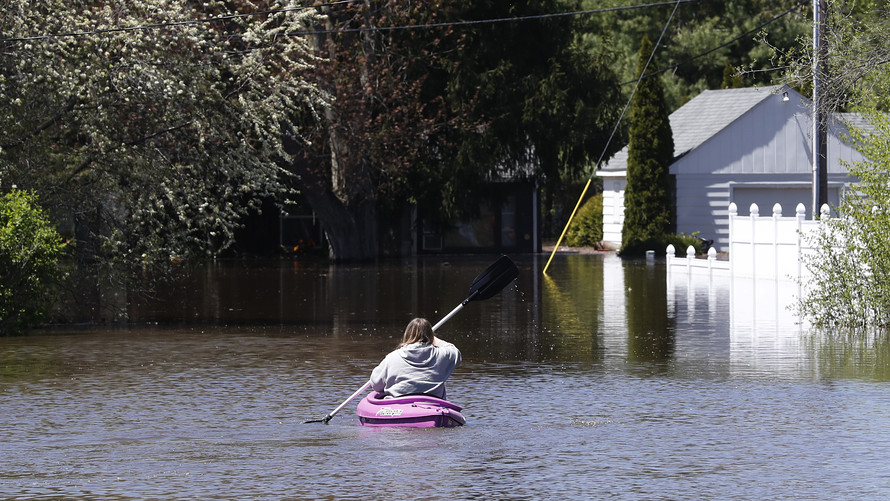 Associated Press
A kayaker paddles out to check on a residence as the Tittabawassee River overflows Wednesday in Midland, Mich.

MIDLAND, Mich. — Floodwaters surging through Central Michigan on Wednesday were mixing with containment ponds at a Dow Chemical Co. plant and could displace sediment from a downstream Superfund site, though the company said there was no risk to people or the environment.

Dow /zigman2/quotes/203121064/composite DOW -2.13%   said the ponds held only water, and it has detected no chemical releases from the plant in Midland where the company was founded, though the U.S. Environmental Protection Agency said state officials would evaluate the plant when they’re able. Once the flooding recedes, Dow will be required to assess the Superfund site — contaminated with dioxins the company dumped in the last century — to determine if any contamination was released, the EPA said.

Meanwhile, the Tittabawassee River crested at just over 35 feet in Midland, about 3 feet below the forecast level.

Gov. Gretchen Whitmer had warned that the city of 42,000 people could end up under 9 feet of water by Wednesday evening after floodwaters overtook two dams and forced the evacuation of about 10,000 people from their homes.

But the danger isn’t over, and Midland officials asked that residents not return yet. The National Weather Service said communities farther downstream were bracing for flooding in the coming days.

No injuries or fatalities related to the flooding have been reported, Midland spokeswoman Selina Tisdale said.

Residents near the river were urged to seek higher ground following what the National Weather Service called “catastrophic dam failures” at the Edenville Dam, about 20 miles northwest of Midland, and the Sanford Dam, about 8 miles downriver.

Midland City Manager Brad Kaye said Wednesday that the Sanford Dam is overflowing but that the extent of structural damage isn’t yet known.

If the entire dam structure were to fail, “there would be a much higher surge that will come down the river and that could raise the level much more quickly than what we’re seeing right at the moment,” Kaye said.

In nearby Edenville, Bob Yahrmarkt, 79, evacuated his home along the river on Tuesday afternoon. He said he couldn’t believe what he saw when he returned Wednesday. “Just devastation,” said Yahrmarkt.

His garage, which housed tools and equipment he amassed over 70 years, was swept away. His home was heavily damaged by water: It has three levels — two beneath the main floor, which itself was more than a foot underwater.

“I’m looking at a sand pile and concrete where the garage was,” Yahrmarkt said, noting that floodwaters also pushed his antique 1953 Ford sedan and a Harley-Davidson motorcycle around in his yard.

His neighbor, 58-year-old Dan Dionne, returned home to find everything beneath his home washed away.

“I never saw nothing like this,” Dionne said. “We had a flood before, but nothing like this. It’s like someone picked up my garage and shook it. There’s a freezer, refrigerator in my backyard. I don’t know where it’s from.”

The river topped a previous record of 33.9 feet set in 1986, the National Weather Service said. Its flood stage is 24 feet, and it had been expected to crest at about 38 feet.