The prestigious contract went to the superior company, despite detractors who claim President Trump opposed Amazon

Following the announcement, an AWS spokesperson told CNBC: “We’re surprised about this conclusion. AWS is the clear leader in cloud computing, and a detailed assessment purely on the comparative offerings clearly lead to a different conclusion.”

Although Amazon is correct in saying the company is the leader in cloud computing, AWS is not the leader in hybrid cloud computing. Hybrid is an essential strategy for the security-conscious Department of Defense, as it can’t put its entire system in the cloud for obvious security reasons. The DoD must retain the most sensitive information with on-premise servers while leveraging the cloud for artificial-intelligence and machine-learning purposes. The cloud is necessary, however, as real-time data helps prepare for combat and inform missions when soldiers are in the field.

The security risks of using servers outside the Pentagon’s domain are offset by physically separated government regions and hybrid solutions that extend on-premise servers by adding the cloud where necessary. Therefore, both on-premise and cloud are equally critical, and therefore the DoD requires a hybrid cloud strategy. Hybrid is where Microsoft excels. Oddly, that piece is missing from Amazon’s discussions.

The case for Microsoft

In 2017, Microsoft designed Azure Stack to meet hybrid cloud computing needs, a distinction from AWS, which was designed for cloud-only computing needs without the flexibility of leveraging on-premise servers.

That has led Amazon to chase Microsoft with hybrid-cloud offerings such as AWS Outposts, which launched in November of 2018 — well after the Pentagon bid had been opened. As of the first half of 2019, Microsoft was the only company among the top three cloud providers that has a generally available hybrid cloud .

Microsoft’s Windows operating system has run on servers for decades, and it was a natural extension to offer Azure Cloud to run on-premise. Microsoft’s hybrid strategy has resulted in 95% of Fortune 500 companies using Azure today. That is a staggering statistic, which shows the superiority of hybrid cloud compared with traditional cloud computing. As J.B. Hunt, one of Azure’s Fortune 500 customers, said: “Microsoft didn’t ask us to bend to their vision of a cloud.”

According to a 2018 survey , the top reasons for using hybrid cloud include controlling where important data is stored, at 71%, and using cloud for backup and disaster recovery, at 69%. Both are solid reasons for choosing the hybrid cloud leader for either a Fortune 500 company with significant intellectual property or an initiative such as JEDI.

Microsoft has a bigger global footprint than Amazon, which is an advantage for military purposes. Azure is present in 54 regions globally, compared with AWS’s 25 and Google Cloud Platform’s 21. 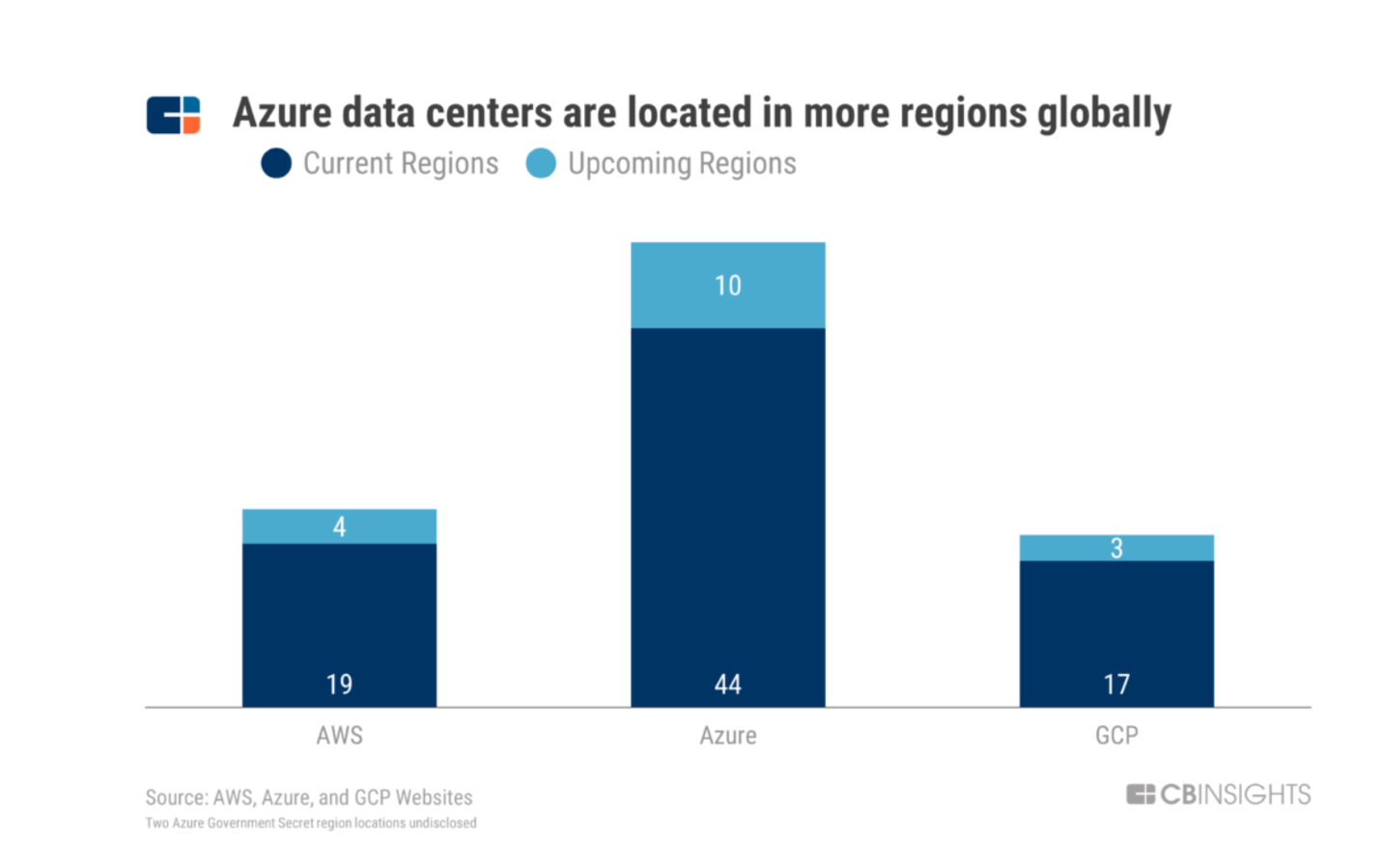 Microsoft in 2018 won a contract to supply HoloLens augmented-reality headsets to the military. It snagged the $7.6 billion Defense Enterprise Office Solution contract from the department earlier this year to provide productivity tools. In 2018, Microsoft won an extension for the United States Intelligence Community to continue using its products, such as Office 365 for US Government, Windows 10 and Azure Government. The company has continued to accumulate top clearance certificates from the DoD. Those make it easier to imagine Microsoft is on par with Amazon for its ability to handle large government contracts.

The big picture is not about Bezos versus Trump, or Trump allegedly telling then-Defense Secretary James Mattis to “screw Amazon.” It is that cloud servers may soon become the new ground war, as China begins to outpace the U.S. on artificial intelligence and machine learning, which carries security implications. For instance, China is now producing more AI patents than the United States with the goal of growing its AI market to $150 billion , up from $10.2 billion in 2019.

It would be unimaginable for the Pentagon to choose a cloud infrastructure company based on anything other than the merits of the product for one of the most important cyber security decisions the country has ever made.

Amazon would do better to focus its efforts on improving hybrid offerings, which lag behind Microsoft’s, rather than to spend resources fighting a losing battle.

Disclosure: The writer owns Microsoft stock and holds no shares in Amazon.

Beth Kindig is a San Francisco-based technology analyst with more than a decade of experience in analyzing private and public technology companies. Kindig publishes a free newsletter on tech stocks at Beth.Technology and runs a premium research service.

Beth Kindig is a San Francisco-based technology analyst with more than a decade of experience in analyzing private and public tech companies. She publishes a free newsletter on tech stocks at Beth.Technology and runs a premium research service.