Mnuchin, Lighthizer kick off new round of trade negotiations in Beijing

High-level talks between U.S., China will continue in Washington next week 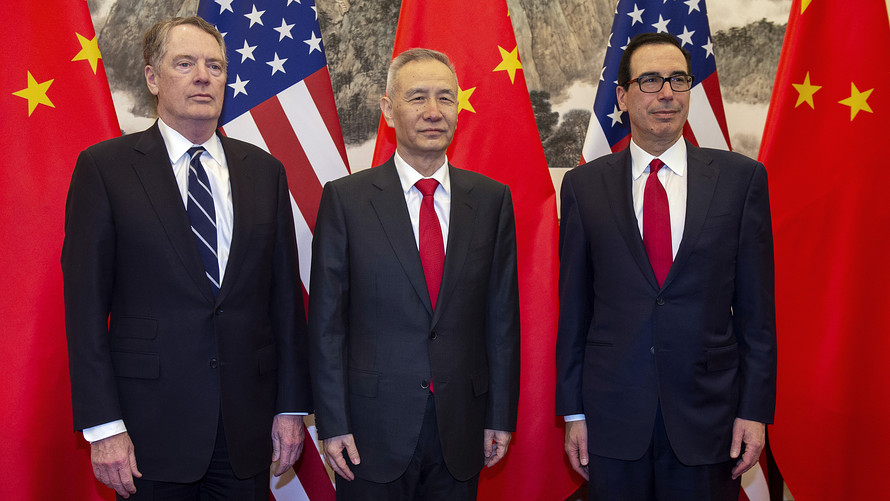 BEIJING — Trade negotiators from China and the U.S. resumed talks Friday to try to resolve their tariff dispute over China’s ambitions to dominate emerging technologies.

The representatives posed for photos at a government guest house in western Beijing but did not comment about the state of negotiations in front of reporters.

Lighthizer and Treasury Secretary Steven Mnuchin attended a working dinner Thursday night with their Chinese counterpart, Vice Premier Liu He, who is to travel to Washington next week. Talks are due to last the entire day Friday.

The meetings are the latest in a rapid-fire series of exchanges seeking to end the conflict that is disrupting trade in goods from soybeans to medical equipment.

“Both teams are currently sparing no effort” on the negotiations, Chinese commerce ministry spokesman Gao Feng said during a regularly scheduled briefing.

Despite the lack of announced agreements, trade analysts expect at least a preliminary accord in coming weeks or months.

Still, they say the negotiations are unlikely to resolve conflicts that have bedeviled U.S.-Chinese relations for two decades. Major sore points include China’s massive trade surplus with the U.S. and accusations it has stolen or coerced the transfer of foreign technology for its own uses.

The latest dispute erupted after Trump raised duties last year on Chinese imports in response to complaints over technology and is fueling fears the battle between the two biggest economies will chill global growth that already shows signs of slowing.

A stumbling block appears to be Washington’s insistence on an enforcement mechanism with penalties if Beijing fails to follow through on commitments.

Washington in September followed up with 10 percent duties on an additional $200 billion. All told, the U.S. tariffs covered roughly half of what the U.S. buys from China.

However, Trump postponed another tariff hike March 1, in a move that may have reduced U.S. leverage in seeking Chinese concessions.

Beijing is not “in the biggest hurry” so long as Washington delays imposing additional tariffs, said Bryan Mercurio, a trade law specialist at the Chinese University of Hong Kong.