Momentum stock strategies are down — but not out 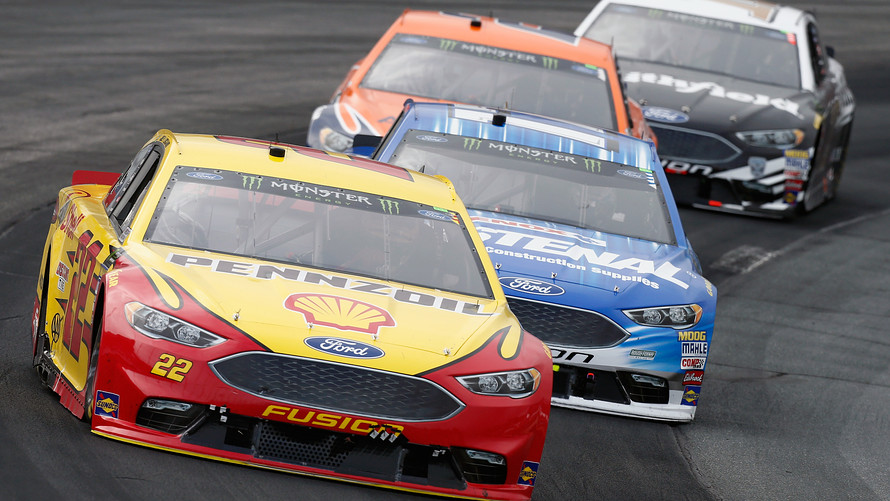 When will momentum regain the big mo? I am referring to investment strategies that favor top-performing stocks and avoid those at the bottom. According to the standard academic definition of momentum in the U.S. stock market, the approach has been struggling for over a decade.

That standard definition keys off stocks’ performance from 12 months previously to one month previously. The chart below reflects the performance of a portfolio containing the 10% of U.S. stocks with the best returns over that trailing period. This rule is reapplied monthly.

As you can see from the accompanying chart, this portfolio on the whole has struggled over the past 15 years — even before transaction costs, which can be substantial. One of the chart’s data series reflects the portfolio’s annualized alpha over the trailing three years, and the other over the trailing five years. (Alpha is measured as the difference between this portfolio’s return and that of the S&P 500 /zigman2/quotes/210599714/realtime SPX +0.48%  .) 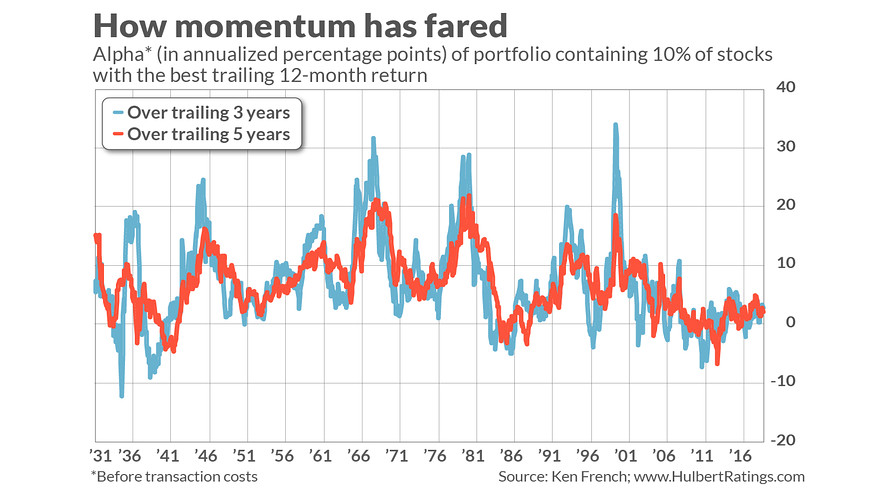 The chart shows that both the three- and five-year alphas have hovered close to the zero line since the early aughts. (I calculated the returns based on data from Dartmouth professor Ken French .)

Some of momentum’s adherents think that this academic definition paints an unfairly bleak picture of momentum’s potential since, when determining which stocks have the greatest momentum, it ignores the immediately preceding month.

In fact, this definition improves momentum’s performance, according to Kent Daniel, a finance professor at Columbia University and a former co-chief investment officer at Goldman Sachs. In an interview, he said that big moves in a given month often are reversed in the immediately succeeding one. This short-term reversal pattern is just the opposite of momentum.

How to improve on momentum

While some have wondered if momentum’s disappointing recent performance means that it has lost much of its previous potential, Daniel believes that such a conclusion is premature. He points out that momentum strategies have never performed particularly well during periods of high volatility — when the market frequently changes direction. What may be different about the past 15 years or so is not that momentum’s potential has changed but that there have been more of these highly volatile periods.

A good illustration of momentum’s potential in calm markets is the performance so far this year of an investment newsletter that picks no-load mutual funds and ETFs based on momentum: No-Load Fund*X, edited by Janet Brown. Year-to-date in 2019, the newsletter is in second place among the newsletters whose performance I monitor, outperforming the Wilshire 5000’s total return index by a margin of 19.8% to 14.7%. (Full disclosure: No-Load Fund*X is one of the newsletters that pays a flat fee to have its returns audited by my performance-monitoring firm.)

During turbulent markets, however, this newsletter has struggled. To show this, I categorized each month over the past three decades according to whether the CBOE Volatility Index’s /zigman2/quotes/210598281/delayed VIX -3.78%   average level in that month was above or below average. In those months with below-average VIX levels, No-Load Fund*X’s average return was 19.9% annualized, versus a loss of 0.4% annualized in months with above-average volatility.

One way to exploit momentum’s correlation with volatility is to invest in momentum strategies during periods of relative calm. This makes sense because, in the past at least, periods of high volatility have tended to be clustered. (Robert Engle, of New York University, won the Nobel Prize in economics in 2003 for developing a theory for why this should be so.) One trading strategy would be to get out of momentum strategies at the first sign of market turmoil and then get back in after the market calms down again.

Another way to improve on momentum’s performance is to couple it with a different definition of momentum. The original definition, which is known among researchers as “cross-sectional momentum,” compares each stock’s return to those of all others. The alternate definition, known as “time series momentum,” focuses only on each stock’s own past return — favoring it if it has performed particularly well (either making money in its own right, or outperforming a benchmark like the T-Bill rate) and shunning it if not.

A number of academic studies have found that time-series momentum is a profitable strategy, both in its own right and in conjunction with cross-sectional momentum. It also has been championed by Gary Antonacci, who refers to an approach that utilizes both approaches as “ dual momentum .”

The bottom line: Don’t count momentum out, just because it hasn’t performed as well over the past 15 years as it did in the many decades before.

Read: Worried about the stock market? Here are easy ways to cut risk

Plus: How to make your retirement savings last forever