However the epidemic unfolds, it is likely to do much more economic damage than policy makers seem to realize 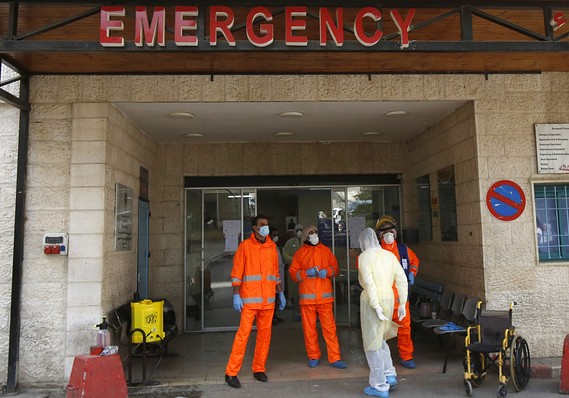 AFP via Getty Images
Palestinian health staff wearing protective masks stand at the emergency entrance of Beit Jala Hospital on March 9 near the West Bank city of Bethlehem which is under lockdown due to the novel coronavirus epidemic.

NEW YORK ( Project Syndicate ) — The number of daily new cases of the COVID-19 coronavirus are finally declining in China. But the number is increasing in the rest of the world, from South Korea to Iran to Italy. However the epidemic unfolds — even if it is soon brought under control globally — it is likely to do much more economic damage than policy makers seem to realize.

In the wake of the 2008 global financial crisis, central banks led the response. As the COVID-19 outbreak disrupts value chains and raises fears among investors, some seem to think that they can do so again.

A far-reaching global crisis demands a comprehensive global response. A multilateral organization such as the World Bank or the International Monetary Fund should urgently establish a task force comprising, say, 20 economists with diverse specialties, as well as experts in health and geopolitics

Already, the Federal Reserve has cut interest rates by half a percentage point – its largest single cut in over a decade. But the Fed’s move, without other supporting policies, seemed only to confuse stock markets /zigman2/quotes/210599714/realtime SPX -0.41%   further; just minutes after the cut, their downward slide continued.

A far-reaching global crisis demands a comprehensive global response. I do not know exactly what such a response should look like – at this point, no one does.

But we can find out. To that end, a multilateral organization such as the World Bank or the International Monetary Fund should urgently establish a task force comprising, say, 20 economists with diverse specialties, as well as experts in health and geopolitics.

This “C20” would be charged with analyzing the crisis and designing a coordinated global policy response on a tight deadline. It would need to submit its first report – with a list of initial actions to be taken by governments and, possibly, responsible private corporations – within a month.

Each subsequent month, it would provide an updated agenda. Over time, effective policies would take root, and the group could be disbanded, possibly as soon as a year after its formation.

Nothing the C20 did would prevent the initial direct damage to some sectors, such as tourism. And that damage is likely to be substantial. For example, the International Air Transport Association estimates that the global airline sector could lose $113 billion in sales if the virus continues to spread.

Likewise, major hotel brands are reporting declining business. Hilton /zigman2/quotes/202780307/composite HLT +0.33%  , which closed 150 hotels in China, expects to lose $25 million to $50 million in full-year adjusted earnings (before interest, taxes, depreciation, and amortization), if the outbreak and recovery each last 3-6 months. Tourism expenditure by the Chinese alone – which amounted to $277 billion in 2018 – is, in my view, likely to decline by more than half this year.

But the C20 might be able to minimize or even offset these early shocks’ secondary and tertiary multiplier effects, which would hit a wide range of sectors, disrupting employment and prices.

For example, if demand declined in all sectors, governments could employ broad monetary and fiscal policy to revive it. Central banks could cut policy rates, while governments carried out a coordinated fiscal expansion, much like during the Great Recession.

Yet, this time around, such an approach would prove inadequate. After all, the COVID-19 crisis is different from the 2008 crisis in a crucial way: even as demand slumps in some sectors, it is spiking in others, pushing up prices and excluding regular buyers.