Only seven strategies have outperformed a basic formula

Check added, however, that his BCI newsletter does not publish a specific market-timing signal. Instead, he said, Hulbert deduces a signal from the percentage of BCI’s model account that happens to be in cash, which varies between 0% and 40%. Because BCI subscribers see no visible signal, the graphs shown below omit the two BCI portfolios.

Graph 1 shows the study period’s first bear-bull market cycle, which ran from March 31, 2000 (the highest month-end of the dot-com bubble) to Oct. 31, 2007 (the last month of the recovery). Only Marketimer and two of the Timer Digest strategies outperformed the “sell in May” formula. The other strategies delivered essentially the same return as the S&P 500. In a bad sign, The Chartist actually experienced the same 44% crash in 2002 as the index itself. 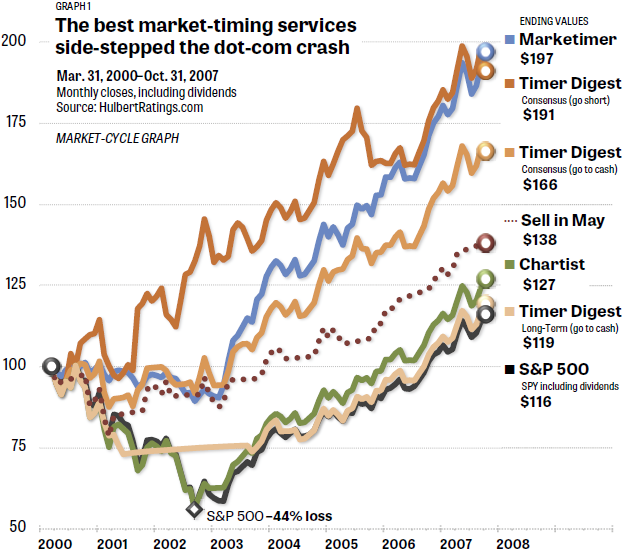 Graph 2 shows the 2007-2009 crash and the subsequent recovery through Jan. 31, 2016, when the study ends. In this distinctly different bear-bull market cycle, the winners were completely reversed. The market-beating strategies this time were published by The Chartist and a different Timer Digest portfolio than the two that excelled in 2000-2007. By contrast, Marketimer and the two Timer Digest “consensus” strategies merely delivered returns that were similar to those of the S&P 500. Marketimer, despite achieving the top ranking in 2000-2007, subjected investors in 2009 to the same 51% crash as the index. 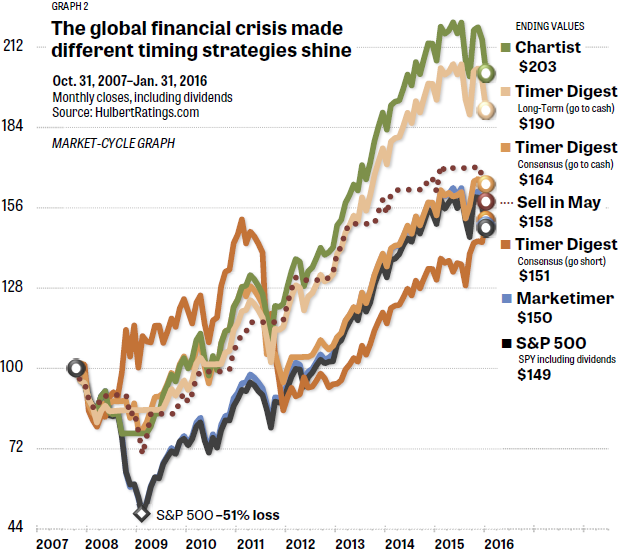 What’s the upshot of all this?

• You had a less than one-in-34 chance of choosing a timing strategy in January 2000 that would (A) continue to be published for 16 years and (B) substantially beat the market over that time.

• Even if you happened to choose one of the strategies that would be superior in the 2000-2007 period, those strategies tended not to repeat their former greatness in 2007-2016.

To make the decision even trickier for investors, selecting a poor market-timing adviser can subject you to severe losses. 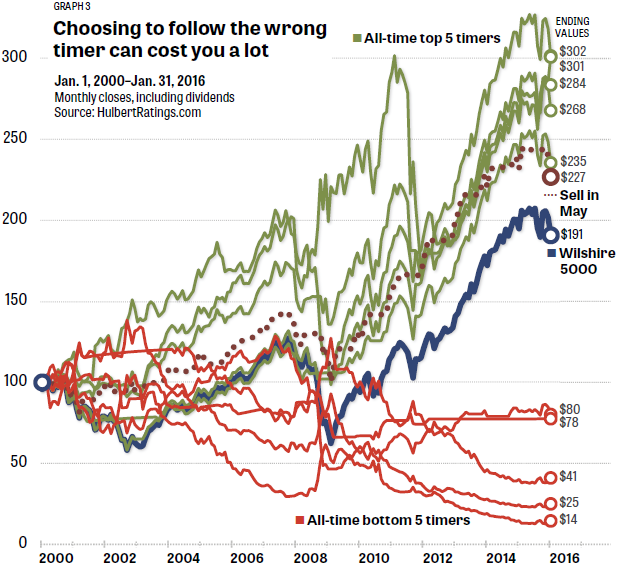 Don’t just throw up your hands and adopt “sell in May” as your investment policy. It’s usually a poor timing strategy. The formula may have worked in the 1930s — when memorable losses occurred between May and October during the Great Depression — but not so much lately.

Steve LeCompte, CEO of the CXO Advisory Group, studied the pattern from April 1871 through April 2019 and concluded: “U.S. stocks generally do better during November-April than during May-October,” LeCompte found, but “buying and holding stocks easily outperforms a ‘sell in May’ market-timing strategy.”

Many investors save their money in employer-based tax-deferred accounts, such as 401(k) plans. These programs commonly prohibit participants from trading individual stocks, limiting employees to a list of mutual funds. Also, most such programs prevent participants from making portfolio changes more than once or twice a month. What can investors who face such restrictions do to achieve the best gain with the least risk? Hundreds of strategies exist, but there are four that stand out:

• Market timing can fit within 401(k) plan requirements of no more than one or two changes per month. But Hulbert’s study shows that it’s hard to determine in advance which strategy will succeed, and most timing services will seriously underperform the market.

• Target-date funds gradually lower the percentage of equities in your portfolio. For example, you might have 80% to 90% in equities when you’re age 45 or under, but only 50% at age 70. Studies show, however, that target-date funds underperform a classic balanced portfolio of 50% stocks/50% bonds, in the majority of cases.

• Static asset allocation involves spreading your money among five to 10 index funds and holding them in unchanging percentages. Eight of these strategies, called Lazy Portfolios, have been tracked in real time by MarketWatch for more than 17 years. These portfolios have underperformed the S&P 500 over the long term by 3% to 5% percent annualized. But they are hardly less risky, subjecting investors to crashes of 35% to 50% — nearly as bad as the broad market itself.

• Asset rotation employs essentially the same index funds as Lazy Portfolios, but the investor holds each month only those funds that have recently shown good relative strength, also known as momentum. Advocates include LeCompte and Mebane Faber, the author of the most-downloaded white paper of all time, out of hundreds of thousands of studies posted at the Social Sciences Research Network. Analyses such as these suggest that asset-rotation strategies, sometimes known as Muscular Portfolios, deliver market-like returns while sparing investors from losses greater than 25%.

Hulbert’s scoreboard on the 77 timing strategies, including the name of each publisher, is posted on his market-timing-study page.

For more information on each of the top-ranked newsletters, see the websites of The Blue Chip Investor , The Chartist , Marketimer and Timer Digest .