MUNICH -- Germany's Munich Re (FRA:DE:MUV2) AG Tuesday reported a 14% rise in net profit for the second quarter, helped by higher premium income and a substantial rise in investment gains. 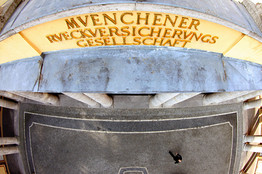 Munich Re, which is one of the largest reinsurers by gross premiums worldwide alongside Swiss Reinsurance Co., said a full-year profit guidance is still "particularly difficult" to make due to "uncertainties resulting from the economic crisis."

But it reiterated it still targets a 15% return on risk-adjusted capital over the reinsurance business cycle, though consenting that this is "ambitious (...) but still achievable."

It did, however, revise upward its 2009 forecast for gross premium income for the second time this year, to a range between €40 billion ($57.5 billion) and €42 billion, up from the previous estimate of €39 billion to €41 billion, due to additional large-volume treaties signed in life-health reinsurance. The previous figure had been revised upward in May. At the same time, however, it cast some doubt on attaining its goal of a 97% combined ratio in reinsurance in 2009, saying that due to recession-related losses, this was more likely achieved over the market cycle.

Quarterly combined ratio, a measure of operational performance, was 98.1%, mainly reflecting additional, recession-related costs for claims in credit and surety reinsurance. A combined ratio below 100% indicates the underwriting is profitable.

Gross premium income was 15% higher to €10.33 billion from €9.01 billion, above the forecast rise to €9.8 billion, mainly due to rises in reinsurance premiums.

Included in this figure are quarterly net write-downs of €125 million, down from €660 million a year ago when substantial write-offs on the stock portfolio had to be made.

Premium income in reinsurance was up 22% to €6.3 billion, getting a lift from both property-casualty and life-health reinsurance operations. This was helped by the first-time consolidation of engineering insurance specialist Hartford Steam Boiler Inspection & Insurance Co. and by new large five-year life reinsurance contracts.

Merck Finck analyst Konrad Becker called the figures better than forecast, notably due to higher premium income and a substantial decline in write-downs, which led to the better-than-anticipated investment result. He called the higher guidance for premium income positive. Becker has his rating under review.

Sal. Oppenheim analyst Stephan Kalb, who rates the shares at "buy," said the average 4.4% rate rise Munich Re obtained in the July 1 contract renewals was below his expectations. It was also below the 7.2% average rate rise obtained in April.

He called positive, however, that Munich Re expects "the price level to prove durable in 2010, particularly in capital-intensive business segments." In July, reinsurance contracts in the U.S., Australia and Latin America come up for renewal. These account for about 8% of Munich Re's overall property-casualty premium income.

In morning trading in Frankfurt, Munich Re shares were up 1.5%, outperforming the wider market, which was down 0.5%. The shares have lost 0.8% over the past 12 months, valuing the company around €21 billion.

Write to Ulrike Dauer at ulrike.dauer@dowjones.com