American Media sells tabloid amid revelations about relationship with Trump, accusations from Bezos 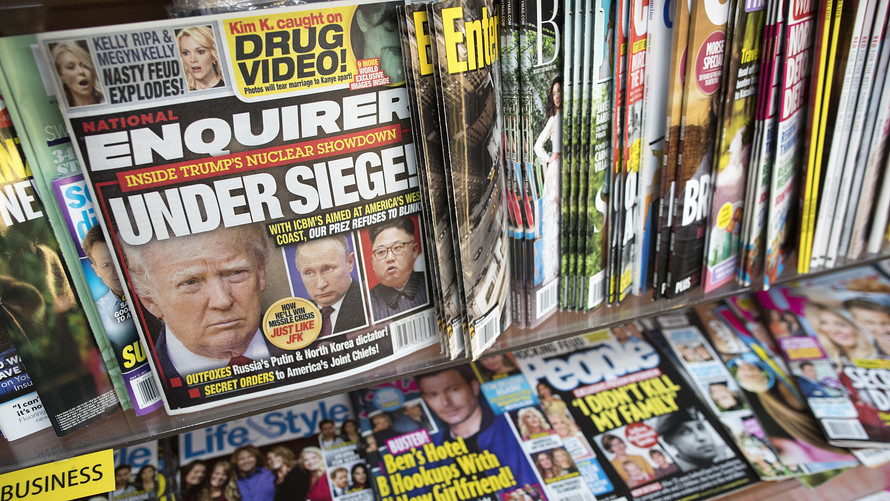 Associated Press
American Media said last week that it wanted to get out of the tabloid business.

NEW YORK — The National Enquirer is being sold to the former head of the airport newsstand company Hudson News following a rocky year in which the tabloid was accused of burying stories that could have hurt Donald Trump’s 2016 presidential campaign.

Tabloid owner American Media said Thursday it plans to sell the supermarket weekly to James Cohen. Financial terms were not immediately disclosed for the deal, which included two other American Media tabloids, the Globe and the National Examiner. The Wall Street Journal reported the deal was worth $100 million.

American Media said last week that it wanted to get out of the tabloid business to focus on its other operations, which includes its teen brand and broadcast platforms.

Federal prosecutors in Manhattan agreed last year not to prosecute American Media in exchange for the company’s cooperation in the campaign finance investigation. That probe eventually led to a three-year prison term for Trump’s former personal lawyer Michael Cohen for campaign violations among other charges.

American Media admitted it had paid $150,000 to keep former Playboy model Karen McDougal quiet about an alleged affair with Trump to help his campaign. Trump has denied an affair.

The National Enquirer has also been accused by Amazon /zigman2/quotes/210331248/composite AMZN -0.62%   chief Jeff Bezos of trying to blackmail him by threatening to publish explicit photos of him.

An American Media attorney denied the tabloid engaged in blackmail, but the attack from Bezos threatened potentially big legal costs, possibly upending American Media’s non-prosecution agreement with prosecutors. The Associated Press reported in February that prosecutors were looking into whether the publisher violated terms of the deal, which included a promise not to break any laws in the future.

The Bezos attack came at a difficult time for the company. It had financed several recent acquisitions with borrowed money and was struggling under a heavy debt load. American Media said the Cohen deal would help reduce the amount it needs to pay back, leaving it with $355 million in debt.