The world laughed at the Ja Rule-backed Fyre Fest — but those who were there tell Moneyish why it wasn’t so funny on the ground. 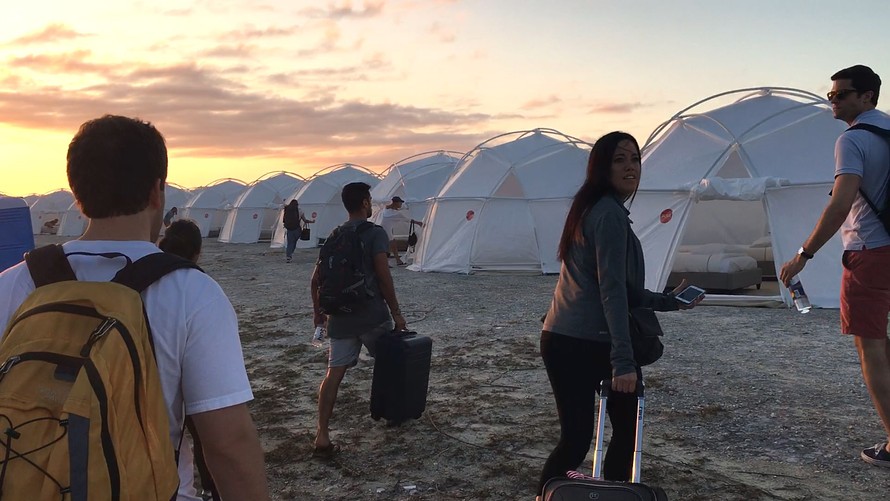 The Bahamian retreat backed by Ja Rule and promoted on Instagram by supermodels like Kendall Jenner was billed as a luxury Coachella in the Caribbean — but it became a media firestorm in late April 2017 after hundreds of ticket holders expecting a luxury experience on a private island arrived to find sodden FEMA tents on a construction site that was serving what looked like a Kraft single slapped on two pieces of white toast. They began sharing the stark conditions on Twitter and Instagram, which spurred a social media schadenfreude reveling at rich kids roughing it. 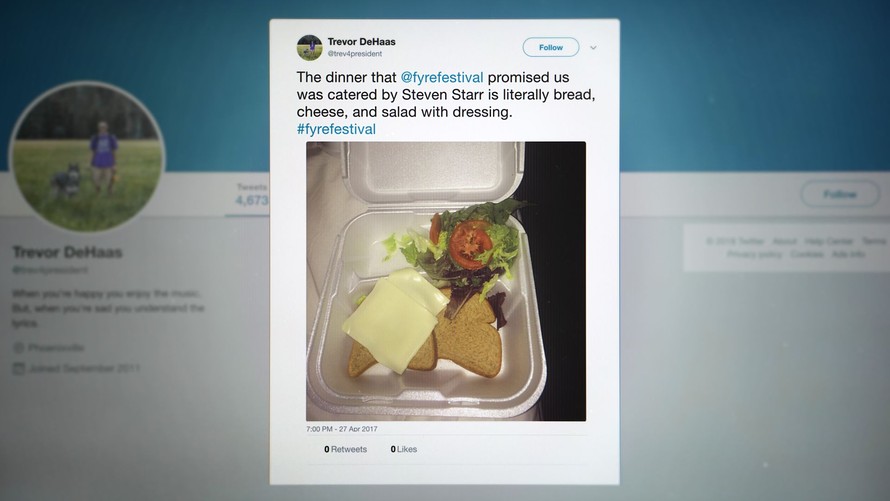 But similar to the stark contrast between the expectation and the reality of Fyre Fest, itself, many ticket holders weren’t trust fund kids at all. The festival did hawk luxury packages like the $400,000 “Artist’s Palace,” which covered four beds and dinner with a festival performer (Blink-182, Migos and Major Lazor were among the headliners, before pulling out at the last minute), and many reports claimed festival goers dropped up to $12,000 apiece. But most attendees actually paid $500 to $2,000 for their tickets, Vice reported — not much more on the lower end than three-day general admission to Governors Ball ($305) or Coachella ($429).

In fact, the Netflix documentary “Fyre” streaming Friday catches festival cofounders Billy McFarland and Ja Rule on camera boasting to a bunch of models that, “We’re selling a pipe dream to your average loser. Your average guy in middle-America,” as McFarland says. Fyre had a video team take hours of footage following the core Fyre team partying and talking about their plans for the fest, which the videographer shared with “Fyre” director Chris Smith. Smith told Moneyish that he spent a year finding and interviewing former Fyre employees, contractors and customers, many who provided their own photos, videos, emails and texts that spell out the event’s rise and fall. “What a lot of people knew about (Fyre) was the headlines — it was ‘Lord of the Flies’ with Instagram influencers — but I was interested in what the story was behind that,” said Smith.

And a lot of people — not just FOMO kids, but also respected investors, contractors and performers — bought into the beautiful lie.

“This promised that everyone was going to be a VIP. There was a million-dollar treasure hunt. You would be able to wake up in a cabana, do yoga on the beach, go to breakfast and walk past Kendall Jenner,” attendee Dylan Caccamesi, a 23-year-old musician and bartender from Atlantic City, told Moneyish. “The ironic part is, I’m sure there were never-worked-a-day-in-their-lives rich kids there, but most people I ran into were just like me. They worked hard and they saved up their money to get here because this sounded like something cool that they could talk about forever. We were just trying to pretend to live this lifestyle for a weekend.”

Instead, after he and his friends dropped around $1,600 for their cabana and to load their smart festival wristbands with cash for the weekend, they arrived to find paradise in pandemonium. “There was a huge line to get your accommodations, and they just had these Instagram models walking around pouring tequila in our mouths, which was a huge red flag,” he said. “We were hearing on Twitter that the performers were canceling. And then all of a sudden people started running, and someone said, ‘They’re not giving us tents — it’s a free-for-all!’”

Caccamesi and his friends tried to make the best of it by spending the night and the next day drinking free booze on the beach while they waited for buses to the airport — because after the festival was canceled, Caccamesi said the bartender started letting the remaining guests take whatever bottles that they wanted. They were able to claim a tent, which they napped in for only an hour or so. And they had more to eat besides what was shown in the viral “cheese sandwich” photo, as some local caterers were dishing out Eggo waffles, sausages and pancakes for breakfast, and even some Bourbon shrimp and chicken at one point.

But other people reported having their tents looted, as there was limited lighting and security. “I never thought my life was in danger, but we worried that if they couldn’t get us off the island, and we were here a whole week, that we might not have enough food and water,” said Caccamesi. All things considered, he had a positive outcome. While Fyre never refunded the $3,800 that he put on his Capital One card to cover his expenses and some of his friends’ fees — or refunded anybody at Fyre Fest, for that matter — he disputed the charges with the credit card company, and had them removed.

Seth Crossno, 34, from Raleigh, N.C. had a more frightening experience. He began live tweeting the events under the alias William N. Finley IV — a character that parodies the elite crowd — and his images of the failed fest went viral. He and his friend had spent about $13,000 on VIP packages, which included an exclusive ‘artist pass’ to go backstage. Instead, he found hundreds of people scavenging their luggage from shipping containers, and Fyre CEO McFarland himself standing on a table telling everyone to just “go find a tent.”

Worse, flying home became a nightmare, as the festival hadn’t arranged nearly enough buses or charter flights for its guests to return home. So when Cressno tried flying home that night, he first spent five hours sitting in a plane on the runway before he and the other passengers were locked in the airport waiting room — with a chain and a padlock on the door, because it opened onto the tarmac — for another two hours with no food or water. “It was getting hot, and a guy fainted, and that’s when they finally had to open the doors,” Crossno said. “I made jokes on Twitter, but it was serious. At the time, it was not funny at all. People definitely could have gotten hurt, and the conditions were not safe by any means. This is so much more than rich kids of Instagram stuck on an island.”

Which is what “Fyre” tries to get across by turning the lens on the investors, marketers and contractors who got in way over their heads — and whose growing concerns about the lack of funding or infrastructure to support hundreds of guests were ignored by McFarland. He is currently serving a six-year federal prison sentence for defrauding Fyre Festival investors, as well as running a ticket-selling scam while he was on probation for the Fyre Fest charges. Lawsuits adding up to more than $100 million in damages have also been filed against McFarland and Ja Rule.

Moneyish reached out to McFarland’s lawyer and representatives for Ja Rule for this story, but didn’t get a response. McFarland apologized from prison to People a couple of months ago, saying, “I am incredibly sorry for my collective actions … I’ve lived every day in prison with pain, and I will continue to do so until I am able to make up for some of this harm through work and actions that society finds respectable.” Ja Rule told Rolling Stone at the time that he was “heartbroken” and, “I don’t know how everything went so left, but I’m working to make it right by making sure everyone is refunded.” To date, Fyre Fest attendees have not received refunds, although some guests like Caccamesi have successfully lobbied their credit card companies to remove Fyre Fest charges. Crossno and his friend won a $5 million lawsuit against McFarland , which was granted in absentia after he failed to respond to a year’s worth of legal proceedings. They haven’t received any of it yet. 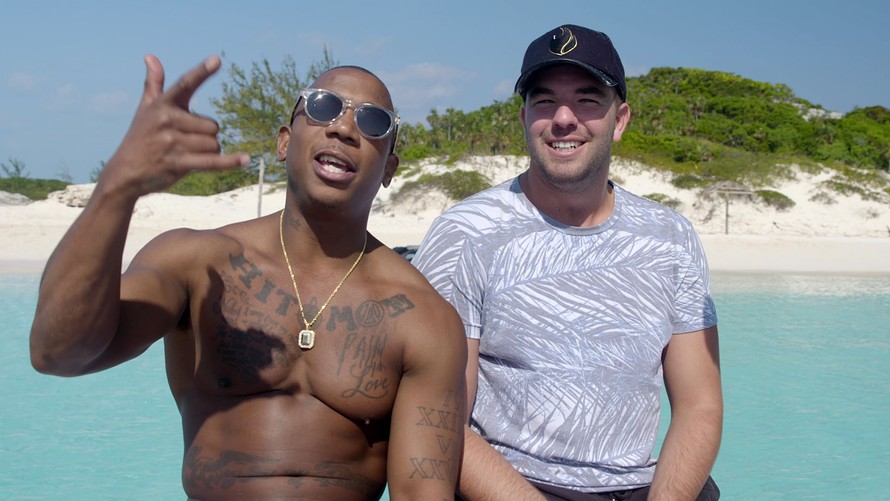 For all of the Fyre founders’ apologies, the documentary tells a very different story. For instance, Marc Weinstein, who was a senior consultant on the festival, reveals that he sent an email to McFarland and company weeks before the fest warning: “Imagine a scenario where 350 people arrive onto a remote island, are herded onto yellow school buses, brought to a festival site that’s unfinished, and realize they have no place to sleep — and to make it worse, they have no way to get home, because we don’t have any charter flights booked back for them. I know that you’re worried about press, but there is no worse situation than that.” His plea was shrugged off.

“I think it’s very easy to look at something like this after it has fallen apart and say, how didn’t everyone know better?” Smith told Moneyish. “We try to take people on the journey of how this evolved, and how this unfolded, so that it becomes a more human story as opposed to a punchline.”

He was supposed to film with McFarland on two different occasions, but the founder canceled at the last minute both times. “In the end, Billy wanted to get paid, and we didn’t feel comfortable with benefiting him after so many people were hurt based on what he had done,” Smith added.

Because a lot of people got hurt. Fyre Festival had an estimated $7 million in loans outstanding , which is one reason why McFarland was so desperate that the show must go on at all costs. But it’s not just the customers and the investors; the Bahamians who built the physical site have also been stiffed. The documentary speaks with local contractors who were never paid for the weeks they worked, sometimes overnight, to try and get Fyre Fest up and running in the impossible window that the organizers gave them. The day laborers who built the stage and put the tents together are still owed about a quarter-million dollars. And MaryAnn Rolle of the Elvis Rolle restaurant on Exuma Island reveals on camera that McFarland has yet to pay his tab. She had to pay her staff $50,000 out of her own life savings.

“They just wiped it out and never looked back,” she cries on camera. “Personally, I don’t even like to talk about the Fyre Festival. Take it away and just let me start a new beginning. They really, really, really hurt me. I am really hurt by that.”