For the full year, sales were barely higher than in 2017 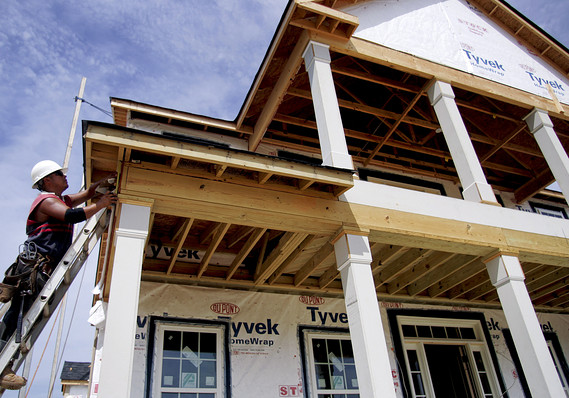 Bloomberg News/Landov
A carpenter installs face boards on a home under construction in North Carolina.

The numbers: New-home sales ran at a seasonally adjusted annual 621,000 rate in December, the Commerce Department said Tuesday . That was 2.4% lower than a year ago.

What happened: Sales of newly-constructed homes were 3.7% higher than in November.

The December figures beat the MarketWatch consensus for a 600,000 rate, but there were sizable downward revisions to the previous three months.

The median sales price in December was $318,600, 7% lower than a year ago. At the current pace of selling, it would take 6.6 months to exhaust available supply, a bit more inventory than is generally considered a marker of a balanced market.

The government’s reports on the new-construction housing market are based on small samples, and are thus prone to big revisions. This winter, they have also been badly delayed by the government shutdown. On Friday, the Commerce Department will release January housing starts figures, which will help give a sense of the pace of building activity during that month. New-home sales for January are set for release next week.

Big picture: Through the noise, it’s clear that 2018 was a tough year for the new construction industry. Sales were just 1.5% higher than in 2017. The big question for the housing market is whether this is a downshift, or the beginning of the end of the cycle.

There are plenty of signs that Americans want to buy homes, but are constrained by the lack of affordable supply. Contract signings for sales of previously-owned homes roared higher in January, and mortgage applications soar whenever rates decline. Still, the headwinds remain, and with plenty of new rental stock in the most popular metro areas, some Americans may bow out of the house hunt.

See: It’s not getting any easier to buy a house, and more Americans may just give up

Ian Shepherdson, chief economist for Pantheon Macro, was rosier. “Sales are recovering from the 549K low in October, when activity likely was depressed by Hurricane Michael,” he said. “The increase in mortgage applications last fall is starting to work through the numbers, and we expect further increases in sales - with an even-money chance of new cycle highs - in the spring. New home sales are doing much better than existing home sales because most new sales are outside the northeast, where the SALT deduction limits have caused havoc.”