New wave of layoffs points to fresh hurdles for U.S. economic recovery heading into the fall 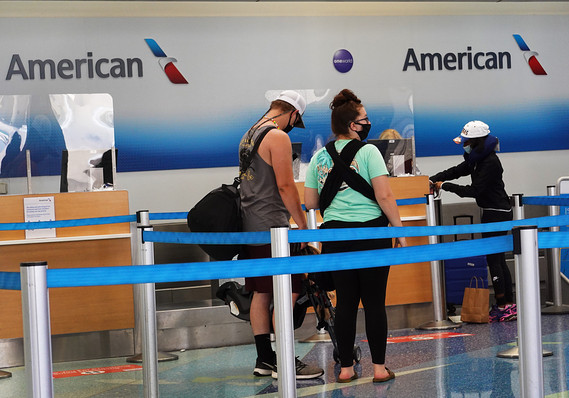 Getty Images
A few people check in at the American Airlines counter in Fort Lauderdale. American plans to lay off or furlough up to 19,000 workers. Airline carriers have been crushed by a huge drop in flying during the pandemic.

A flurry of fresh layoffs and furloughs in the U.S. is posing a new hurdle for a fragile economic recovery whose momentum appears to have flagged.

A handful of large airline carriers and hotel chains such as American Airlines /zigman2/quotes/209207041/composite AAL -4.83%   and MGM Resorts /zigman2/quotes/209932643/composite MGM -4.93%  said this week they would lay off or furlough more than 40,000 employees as they confront a massive loss of customers due to the coronavirus pandemic. Many colleges and schools also plan to reduce staff and more bad news is probably on the way.

The new fissures in the economy suggest the easy growth in May and June after the states allowed businesses to reopen is giving way to a more protracted recovery whose progress is likely to be more uneven.

“The layoffs add to concerns the market has about the sustainability of the pace of the recovery,” said senior economist Sam Bullard of Wells Fargo.

Economic growth slowed in July and is likely to do so again in August. The economy is still recovering, to be sure, just not as fast as it was.

“That’s the point I been making to people. Now the hard part starts,” said chief economist Richard Moody of Regional Financial. “August is going to be a transitional month.”

Wall Street will look for more evidence of cracks in the recovery in the upcoming U.S. jobs report for August next Friday.

The economy may have added about 1.6 million jobs, economists forecast, just a touch lower than the 1.76 million gained in July. The unemployment rate is seen falling to 9.9% from 10.2% in July.

The more important number to watch, though, is private-sector hiring. The government added up to 250,000 temporary Census workers in August while educational employment could surge largely because of seasonal-adjustment quirks tied to the pandemic.

Private-sector employment is expected to increase by slightly more than a million. The recently announced layoffs, for their part, wouldn’t show up until the September employment report.

What remains to be seen is whether Democrats and Republicans in Congress break a deadlock over the next financial-aid bill before most of those workers lose their paychecks.

The White House has sent signals it wants to bolster airlines and other industries that have suffered the greatest during the pandemic. Previously the government had helped airlines keep employees on payrolls regardless of whether they were working through massive federal subsidies that recently expired.

If there’s a few silver linings, consumer spending and manufacturing production have actually grown faster than expected and shown little sign of fading. So far there’s little evidence the loss of tens of billions in dollars in federal aid for the unemployed has caused households to scale back much.

Take automobile and home sales. They rebounded sharply after the first few months of the pandemic and are still going strong.

Typically demand for expensive goods like new cars, trucks and houses taper off when the economy stumbles and consumers worry about their jobs. That isn’t happening right now.

Still, most economists are skeptical the U.S. can grow much faster without another federal relief package that keeps people in the jobs or helps stoke enough demand to encourage businesses to avoid layoffs.

Read: ‘The recovery is going to be a slow one,’ Fed’s Mester says

“Consumers and businesses are going to remain cautious heading into the fall,” Bullard said. “Given all the headwinds, it’s going to take time for the economy to come fully back.”