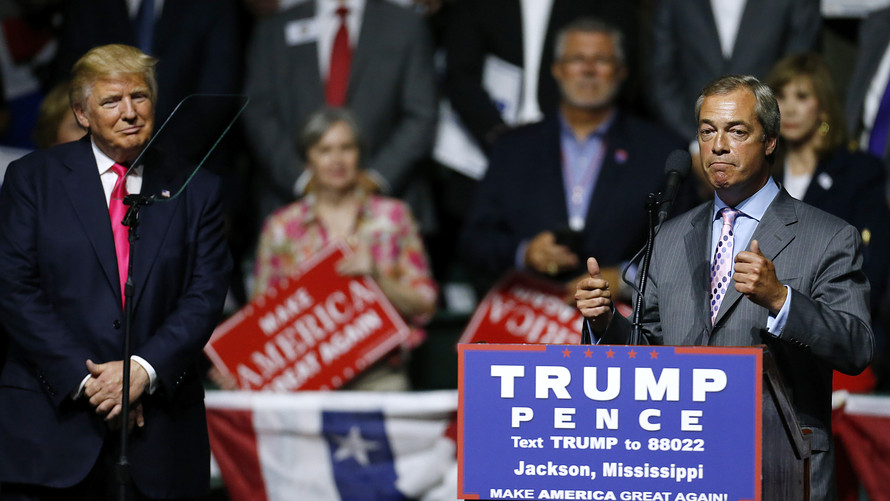 Getty Images
Nigel Farage speaks at a campaign rally for Donald Trump in Jackson, Mississippi during the Republican Presidential candidate race in 2016.

Brexit Party leader Nigel Farage fueled speculation of a return to the U.S. to help Donald Trump’s presidential campaign as his party headed for failure in the U.K. election.

Farage hinted he could play a role in next year’s U.S. election in a television interview on Thursday night.

Exit polls in the U.K. predict Farage’s party will fail to win a single seat in the general election. Following the polls, BBC TV presenter Andrew Neil questioned Farage on whether there was any future for his party before asking if he was off to the U.S.

He said: “I understand you’re off to America now to be Donald Trump’s warm-up man.” Trump has form. He has spoken at a Trump rally in Jackson, Mississippi in 2016 after playing a key role in delivering the Brexit referendum result,

Farage initially denied Neil’s claims and said he has “no plans to leave the country.”

Neil responded: “You’re not going to be whipping up the audience as Mr Trump goes on the stage, then?”

Farage then admitted, smiling: “If I’m asked to help I may.”

On a visit to the U.K. in June to meet then-Prime Minister Theresa May and the Queen, Trump met separately with Farage, who tweeted that the president “really believes in Brexit and is loving his trip to London.”

Despite orchestrating the Brexit campaign in 2016, Farage’s own party—formed to ensure Britain left the EU—looks set to be wiped out in the U.K. general election. Farage decided his party would not stand in seats captured by the Conservatives in the last election - in a bid to stop Labour and the Liberal Democrats, who are against Brexit.

The closely-followed exit poll predicted a strong majority for Boris Johnson’s Conservative Party and heavy losses for Jeremy Corbyn’s Labour, while it suggested the Brexit Party would win no seats.

The pound /zigman2/quotes/210561263/realtime/sampled GBPUSD +0.3684%   surged around 2% to $1.346 following the poll as investors welcomed the prospect of a strong Johnson victory, raising the chances of a Brexit deal and an end to more than three years of uncertainty.