‘No choice’ but to move quickly on impeachment, Pelosi says

House Democrats move to draw up articles of impeachment 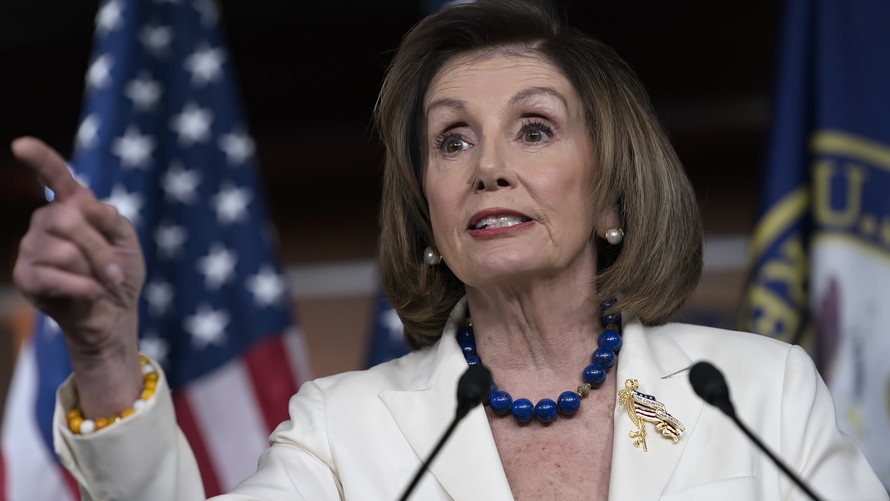 Associated Press
Speaker of the House Nancy Pelosi meets with reporters Thursday at the Capitol.

WASHINGTON — House Democrats moved aggressively to draw up formal articles of impeachment against President Donald Trump on Thursday, with Speaker Nancy Pelosi saying he “leaves us no choice” but to act swiftly because he’s likely to corrupt the system again unless removed before next year’s election.

A strictly partisan effort at this point, derided immediately by Trump and other leading Republicans as a sham and a hoax, it is a politically risky undertaking. Democrats say it is their duty, while Republicans say will it drive Pelosi’s majority from office.

Congress must act, Pelosi said. “The democracy is what is at stake.”

“The president’s actions have seriously violated the Constitution,” she said. “He is trying to corrupt, once again, the election for his own benefit. The president has engaged in abuse of power, undermining our national security and jeopardizing the integrity of our elections.”

Trump has insisted he did nothing wrong. He tweeted that the Democrats “have gone crazy.”

At the core of the impeachment probe is a July phone call with the president of Ukraine, in which Trump pressed the leader to announce investigations of Democrats including political rival Joe Biden at the same time the White House was withholding military aid from its ally bordering an aggressive Russia.

Drafting articles of impeachment is a milestone moment, only the fourth time in U.S. history Congress has tried to remove a president, and it intensifies the rigid and polarizing partisanship of the Trump era that is consuming Washington and dividing the nation.

The speaker delivered her historic announcement in solemn tones at the Capitol, drawing on the Constitution and the Founding Fathers in forcefully claiming Congress’ oversight of the president in the nation’s system of checks and balances. Democrats are already beginning to prepare the formal charges, pushing toward House votes, possibly before Christmas.

“Sadly, but with confidence and humility, with allegiance to our founders and a heart full of love for America, today I am asking our chairmen to proceed with articles of impeachment,” Pelosi said.

Seemingly eager to fight, Trump tweeted that if Democrats “are going to impeach me, do it now, fast.” Though he has fought the House investigation, trying to bar current and former officials from testifying, he said he now wants to move on to a “fair trial” in the Senate.

Approval of articles of impeachment are considered likely in the Democratic-majority House. Conviction in a following trial in the Republican-dominated Senate seems very unlikely.

Drafting articles of impeachment is a milestone moment, only the fourth time in U.S. history Congress has tried to remove a president, and it intensifies the rigid and polarizing partisanship of the Trump era that is consuming Washington and dividing the nation.

Once reluctant to pursue impeachment, warning it was too divisive for the country and needed to be bipartisan, Pelosi is now leading Congress into politically riskier waters for all sides just ahead of the election year.

Republican are standing lock-step with Trump, unswayed by arguments that his actions amount to wrongdoing, let alone impeachable offenses. That is leaving Democrats to go it alone in a campaign to consider removing the 45th president from office.

Pelosi emphasized the Russia connection, from special counsel Robert Mueller’s probe into 2016 election interference to the president’s phone call this summer with Ukrainian President Volodymyr Zelenskiy that set off alarms in Washington.