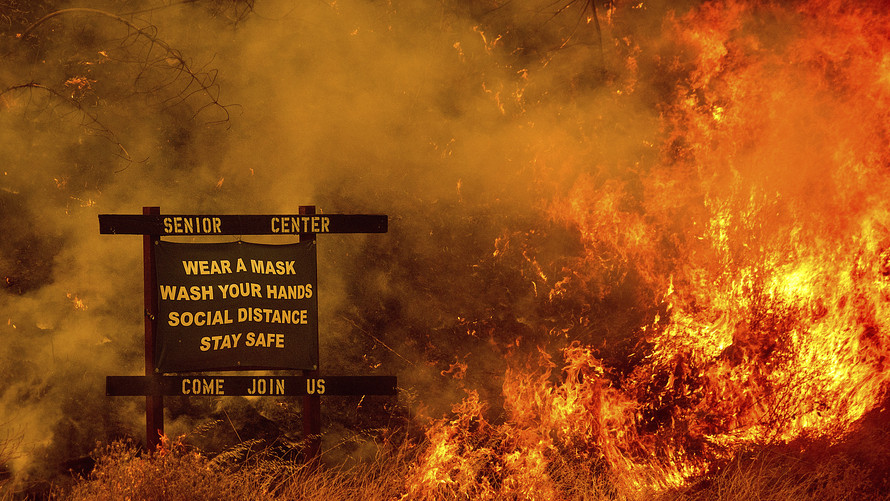 The death of a resident in Solano County, in the northeastern San Francisco Bay Area, was reported Thursday by Sheriff Thomas A. Ferrara, although he didn’t have any additional details.

A Pacific Gas & Electric /zigman2/quotes/202583141/composite PCG -0.45%   utility worker assisting with advance clearing was found dead Wednesday in a vehicle in the Vacaville area between San Francisco and Sacramento. A pilot on a water-dropping mission in central California also died Wednesday when his helicopter crashed.

Gov. Gavin Newsom addressed the wildfires, calling them clear evidence of climate change, in a last-minute video recorded for the Democratic National Convention from a forest near Watsonville after he visited an evacuation center.

“If you are in denial about climate change, come to California,” he said.

“I confess this is not where I expected to be speaking here tonight,” he said into what appeared to be a cellphone camera. Newsom had recorded an earlier, more lighthearted video, to be delivered in the convention’s prime-time hours but decided it didn’t bring the right tone amid his state’s disasters, said Dan Newman, one of his political advisers.

The fires have destroyed 175 structures, including homes, and are threatening 50,000 more, said Daniel Berlant, an assistant deputy director with the state Department of Forestry and Fire Protection. In all, 33 civilians and firefighters have been injured.

At least two people were missing.

Smoke and ash billowing from the fires has fouled the air throughout the scenic central coast and San Francisco.

Most of the activity is in Northern California, where fires have chewed through about 500 square miles (1,250 square kilometers) of brushland, rural areas, canyon country and dense forest surrounding San Francisco.

More than 10,000 firefighters are on the front lines, but fire officials in charge of each of the major fire complexes say they are strapped for resources. Some firefighters were working 72-hour shifts instead of the usual 24 hours. The state has requested 375 engines and crew from other states.

“That’s going to allow our firefighters that have have been on the front line since this weekend to have an opportunity to take some rest,” Berlant said.

“We’re still drastically short for a fire of this size.” he said at an evening news conference.