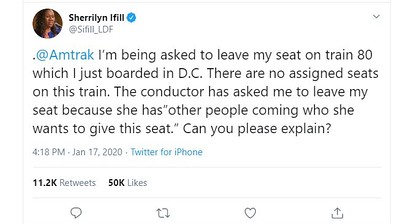 BALTIMORE (AP) — Amtrak has apologized to civil-rights attorney Sherrilyn Ifill after she said she was asked to give up her seat on a train at the start of the Martin Luther King Jr. weekend.

Ifill described the incident — which sparked outrage from observers who drew comparisons of the indignities black civil-rights icons faced — in a series of tweets over the weekend.

“I’m being asked to leave my seat on train 80 which I just boarded in D.C. There are no assigned seats on this train. The conductor has asked me to leave my seat because she has ‘other people coming who she wants to give this seat.’ Can you please explain?” she tweeted late Friday afternoon to some 166,000 followers.

The internationally known attorney, scholar and activist who lives in Baltimore added in another tweet: “is it 1950?”

Jason Abrams, an Amtrak spokesman, told the Baltimore Sun the company apologized for the incident and its slow response.

“Amtrak is looking into the matter more closely so that we can prevent situations like this going forward,” the statement said.

Ifill did not immediately respond to requests for comment from the newspaper.

She went on to tweet that Amtrak officials who called her Saturday morning were “forthright, respectful & apologetic.”