Nvidia marketing of Turing-based chips will be key to fending off challenge from rival, analyst says 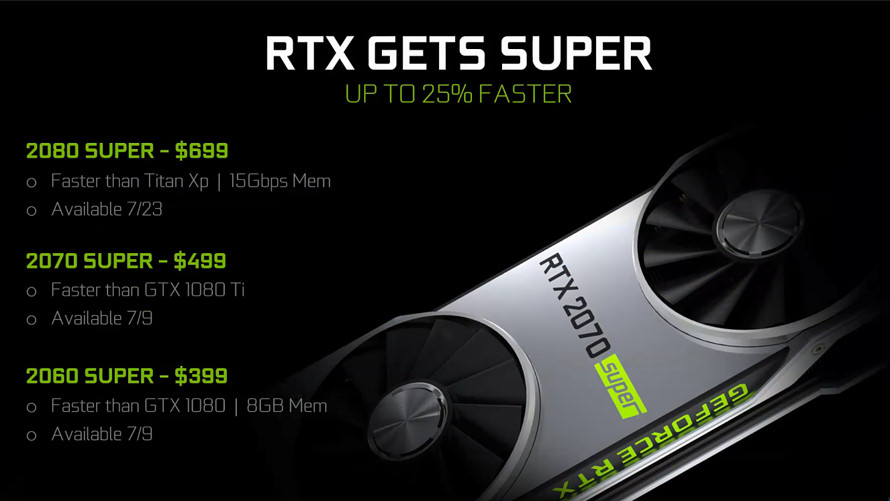 On Tuesday, Nvidia /zigman2/quotes/200467500/composite NVDA -4.74%  announced a “Super” brand of its RTX line of Turing-based gaming cards, which allow real-time ray tracing, letting a computer render realistic-looking lighting and shading. Nvidia said it would launch its RTX 2060 Super and RTX 2070 Super cards on July 9, and its RTX 2080 Super card on July 23.

The announcement comes about a month after rival AMD /zigman2/quotes/208144392/composite AMD -6.97%  took aim at Nvidia, long the market leader in consumer gaming cards, with new offerings. At the beginning of June, AMD shares rallied 10% in one day after the company announced the Radeon RX 5000-series of gaming chipsets. Then, a little more than a week later, AMD Chief Executive Lisa Su said their “best of the best” Radeon 5700 XT gaming card would retail for $499 in July.

At the time, Wells Fargo analyst Aaron Rakers estimated that AMD’s RX 5000-series had about a 10% performance advantage over Nvidia’s RTX 2070. Nvidia claimed that the “Super” versions of its cards are expected to run up to 25% faster than their current versions.

From earlier this year: AMD’s Lisa Su taking aim at Intel and Nvidia

With both cards coming out in July, the competition may boil down to a question of availability, which is very hard to forecast, analyst Pat Moorhead said. While he wouldn’t call Nvidia’s move a “stalemate,” the principal analyst at Moor Insights & Strategy told MarketWatch in an interview that “the competitive position isn’t going to change fundamentally.”

Moorhead said Nvidia is going to have to market its new cards as being superior to AMD’s with their ray-tracing capabilities, an area where game developers are just beginning to take advantage, and Deep Learning Super Sampling, or DLSS. That is what Nvidia calls its AI-assisted technology that boosts frame-rate performance when the chipset is handling graphically intense workloads.

“The game developers and engine developers are committed, but it just takes time to roll all this out,” Moorhead said. “I think it’s going to be up to Nvidia to ... market or sell the fact that this is coming.”

“I think in the end people are going to say, ‘Is it worth an extra $50 or $100 for the Nvidia brand to get ray tracing and DLSS vs. AMD?’ That’s really what I think this will come down to,” he predicted.

Get news alerts on NVIDIA Corp. and Advanced Micro Devices Inc. — or create your own.