Commentary: President’s State of the Union speech is a road map

BOSTON (MarketWatch) — Wayne Gretzky was one of the world’s greatest hockey players partly because he knew where the puck was going. President Barack Obama this week gave ordinary folks a chance to become great investors by telling them where the money will be flowing.

One of the key areas of relevance to investors is energy, where formulating a policy that will reduce the country's dependence on foreign oil will involve more spending in alternative energy, nuclear and coal, said John Praveen, chief investment strategist of Prudential International Investments Advisers. 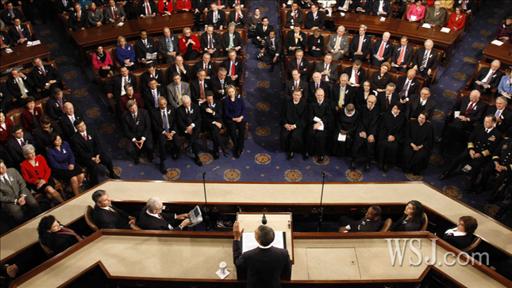 Heard on the Street's John Jannarone explains to Lee Hawkins how firms from Citigroup to Cooper Companies could suffer if President Obama's proposal to lower income taxes becomes law.

At the sector and industry level, Zirin said policy efforts to both reduce emissions of pollutants from existing fuel sources and promote energy efficiency should be positives for the industrials and technology sectors.

“Within industrials, large-scale investments by electric utilities to either retrofit coal-fired plants or shift production to cleaner gas or nuclear production should benefit engineering and construction companies,” Zirin said.

David Carter, chief investment officer of Lenox Advisors, suggested investors might want to approach investing in clean- and alternative-energy companies as if they were venture capitalists. There is a lot of technology and business risk associated with the companies in this sector, he said. “You should invest in ETFs because many [companies] will fail and one or two will succeed and we don’t know which ones will work out,” he said.

Morningstar Analyst Abraham Bailin noted in a recent report that Claymore Global Solar Energy /zigman2/quotes/210041821/composite TAN -6.04%   is the ETF vehicle of choice for investing in the solar-energy sector. In that same report, he also noted that PowerShares Global Clean Energy /zigman2/quotes/202774103/composite PBD -5.98%  and Market Vectors Global Alternative Energy  both provide “broader coverage of the entire alternative-energy space with a much higher level of market liquidity.”

An increase in spending on infrastructure and science will not only improve the longer term competitiveness of the U.S. manufacturing industry but could also potentially boost the industrial sector in the near to medium term, said Prudential’s Praveen.

“Increased infrastructure spending in roads, railways and runways would be positives for construction-services companies and for the materials sector,” Praveen said.

Praveen also said any initiatives that stimulate the labor market, lead to improvement in job creation and reduce unemployment will be a positive for consumer spending and the consumer sectors.