Prices also struggled after a report showed a decline in manufacturing activity in the Philadelphia area, reviving worries about future oil-demand trends. 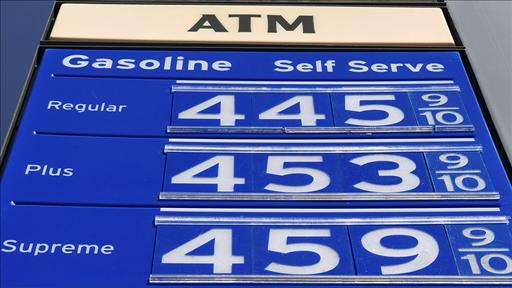 Have gas prices reached their peak?

Gasoline futures extend their losing streak, leading some market participants to declare prices have peaked. If they're right, it's good news for drivers — and, potentially, for the Obama administration.

Some support came mid-session from higher U.S. stocks, but the benchmarks traded lower as the session was nearing a close. Read more in Market Snapshot.

U.S. equities and oil have been tightly correlated as stocks are seen as a proxy for growth and, by extension, for oil demand.

“There’s still some hope for oil demand, but not enough to spur any buying,” said Matt Smith, analyst with Summit Energy in Kentucky.

Meanwhile, natural-gas futures settled at their lowest since Sept. 2001, struggling to hold to $1.90 per million British thermal units.

The jobless-claims numbers took the wind out of energy markets’ sails and, in the absence of major geopolitical concerns, prices drifted, he added.

The number of applicants filing for unemployment hovered near a four-month high, with weekly claims at 386,000 in the week ended April 14, the Labor Department reported. Economists polled by MarketWatch had projected claims would fall to 374,000. Read more about jobless data.

The index gauging manufacturing activity in the Philadelphia region rose at a slower pace in April, falling to 8.5 from 12.5 in March. Sales of existing U.S. homes fell 2.6% in March, more than expected.

Oil prices on Wednesday fell $1.53, or 1.5% after a U.S. government inventories report that showed a higher-than-expected rise in crude supplies.

The Energy Information Administration reported an increase of 25 billion cubic feet to supplies of natural gas in the week ended April 13.

Analysts surveyed by Platts had expected a rise between 24 billion and 28 billion cubic feet for the week.

Natural gas has fallen into a pattern of strength ahead of the supplies data but selling after the report, often regardless of its content. Prices have suffered from warmer-than-usual weather trends and high production.