SAN FRANCISCO (MarketWatch) — Oil futures on Thursday settled at their highest level in more than four months as the U.S. Federal Reserve launched more bond purchases to boost the economy, and investors were rattled by developments in the Middle East.

Crude for October delivery gained $1.30, or 1.3%, to $98.31 a barrel on the New York Mercantile Exchange. That was oil’s highest settlement since early May.

Prices had traded as high as $98.58 a barrel on news that Middle East unrest had spread to Yemen. 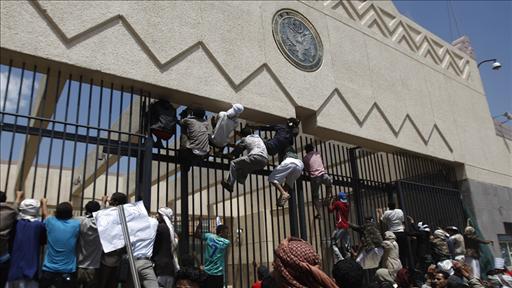 How will U.S. respond to Mideast violence?

Violence spreads in the Middle East as protesters storm the U.S. Embassy in San'a, Yemen.

The Fed also kept in place Operation Twist, under which it sells short-dated debt and reinvests the proceeds in longer-term securities.

In addition, the Fed extended its pledge to keep interest rates exceptionally low from late 2014 to “at least through mid-2015.”

Oil prices have gained in six out of the past seven sessions, as most investors had expected the additional stimulus to propel the U.S. economy and, by extension, to lead to more demand for oil.

Energy traders also kept an eye on developments in the Middle East after the U.S. ambassador to Libya was killed in Benghazi on Tuesday.

“Although this doesn’t present an immediate threat to oil production, connecting the dots from civil unrest to geopolitical tension and potential escalating violence is adding a bit of a risk premium into prices,” wrote Matt Smith, an analyst with Summit Energy, in a note to clients.

Natural-gas futures stayed lower after an inventories report came in line with expectations.

Natural gas for October delivery fell 3 cents, or 0.9%, to settle at $3.04 per million British thermal units.

The rise was smaller than the 80-bcf addition in the same week in 2011 and the five-year-average injection of 72 bcf.

The increase was bullish relative to the five-year average and expectations, but investors were looking ahead, said Tim Evans, an analyst with Citigroup’s Citi Futures Perspective.

“The issue for the market is whether the return of more production from the Gulf of Mexico and the seasonal cooling trend will result in more neutral data going forward. Without the threat of a follow-up bullish number, we’re seeing profit-taking off the recent rally,” he said.

Hurricane Isaac halted natural-gas and oil production when it passed through the Gulf of Mexico in late August. Natural-gas prices had gained for the past three sessions, including a jump of 2.4% on Wednesday.

In other trading, October gasoline futures declined 4 cents, or 1.3%, to settle at $2.96 a gallon, while heating oil for the same month retreated less than 1 cent to finish the day at $3.21 a gallon.

Claudia Assis is a San Francisco-based reporter for MarketWatch. Barbara Kollmeyer is an editor for MarketWatch in Madrid. Sarah Turner in Sydney contributed to this report.