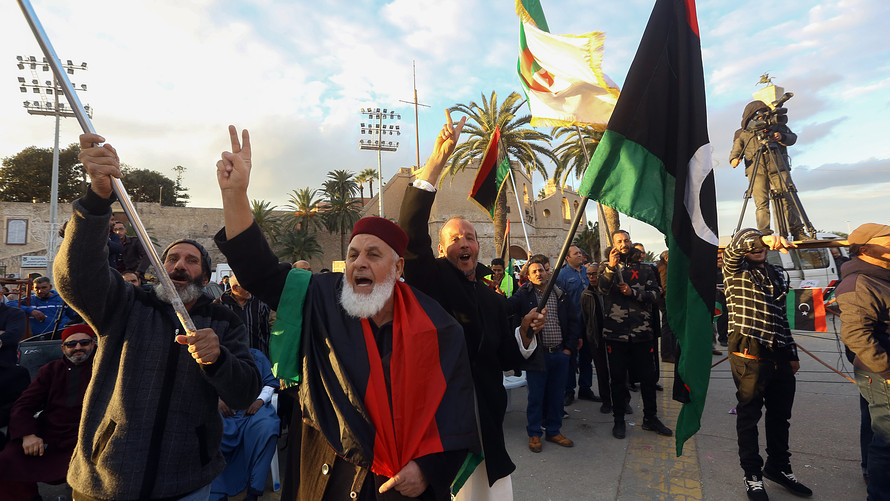 AFP via Getty Images
Demonstrators wave flags as they take part in a rally against eastern Libyan strongman Khalifa Haftar and in support of the UN-recognised government of national accord (GNA) in Martyrs' Square in the GNA-held capital Tripoli on January 10, 2020.

Oil prices climbed Monday, driven by a pair of worries on the supply front driven by unrest in Libya and Iraq.

West Texas Intermediate crude futures for January delivery  rose 59 cents, or 1%, to $59.17 a barrel. There will be no regular trading or settlements in New York for oil to mark the Martin Luther King Jr. holiday.

Brent oil, the international benchmark, is trading as normal. March Brent oil futures climbed 65 cents, or 1%, to $65.50 a barrel.

The largest oil field in Libya shut down production after armed forces cut off a pipeline and blocked exports. “Production of 1.2 million bpd (barrels a day) has been completely crippled after forces loyal to Khalifa Haftar closed a pipeline. About 800k bpd of that figure has been taken out, although it could be higher,” said Neil Wilson, chief market analyst for Markets.com, said in a note to clients.

Meanwhile, security guards striking forced the stoppage of work on an oil field in Iraq.

“This outage comes amid rising fears that general unrest in Iraq, OPEC number two producer, could intensify and trigger a more widespread supply disruption even more so if the protesters set sight on the oil fields,” said Stephen Innes, chief Asia market strategist at AxiTrader.

But he said prices will likely remain capped, “given the market’s reactive nature to fade geopolitical risk quickly.” And Wilson added that any spare capacity is likely to be taken up by other Organization of the Petroleum Exporting Countries members.

Global leaders gathering in Berlin on Sunday agreed to respect an arms embargo in Libya in a bid to force the warring sides to a full cease-fire. The country has been descending further into chaos since longtime dictator Moammar Gadhafi was ousted and killed in 2011.

Oil futures ended with a modest gain on Friday, but registered a loss for a second week in a row — skidding 0.9% — as traders continued to weigh the prospects for energy demand in the wake of the China-U.S. trade deal and Senate approval of the U.S.-Mexico-Canada trade pact this week.

Brent also experienced the second straight week of declines, dipping 0.2%. Baker Hughes /zigman2/quotes/205323712/composite BKR +2.59%  reported Friday that the number of active U.S. oil rigs rose by 14 to 673 this week. That followed declines in each of the past three weeks.