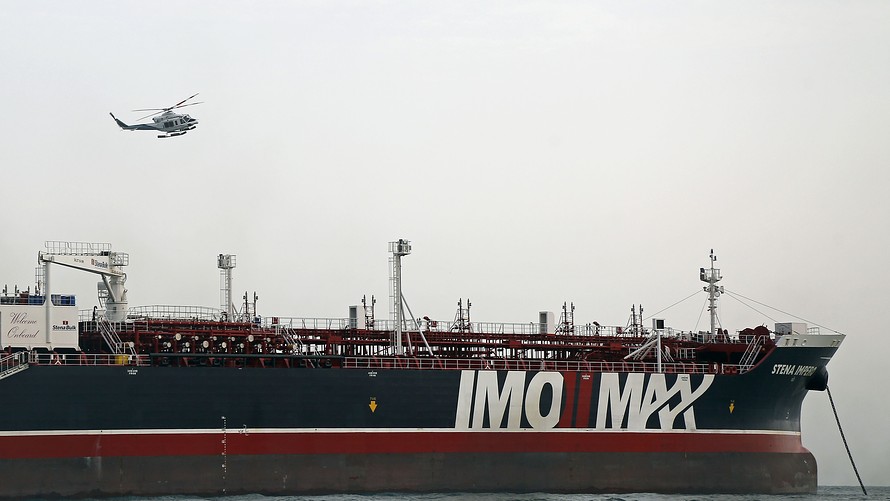 Oil prices finished higher on Monday, as investors watched an increasingly complicated situation in the Persian Gulf after Iran late last week seized a British-flagged tanker, and as the U.K. faces a change in leadership.

“The latest ratcheting up of tensions in the Persian Gulf with the seizure of a U.K. oil tanker has only led to a nominal gain in [West Texas Intermediate crude] though, as would be expected, a firmer gain in Brent,” said Marshall Steeves, energy markets analyst at IHS Markit.

“So far, these events have not shut the Strait [of Hormuz] and the impact on oil exports has been muted,” he told MarketWatch. “If that changes and exports are significantly constrained, then a more substantial oil rally would be the result.”

West Texas Intermediate crude for August delivery rose 59 cents, or 1.1%, to settle at $56.22 a barrel on the New York Mercantile Exchange on the contract’s expiration day. The August contract settled 7.6% lower last week. September WTI oil , which is now the front-month contract, also settled at $56.22, up 46 cents, or 0.8%.

Brent crude for September delivery, the global benchmark, added 79 cents, or 1.3%, to finish at $63.26 a barrel on ICE Futures Europe. The contract slid 6.4% last week.

Oil prices also saw support after Libya’s National Oil Corporation late Friday temporarily suspended operations at the Sharara oil field after an unidentified group shut down of a pipeline valve, but production from the oil field resumed early Monday, according to Reuters .

Tensions remained high in the Strait of Hormuz, through which a third of global seaborne oil and gas moves, after Iran’s Revolutionary Guard seized a U.K.-flagged tanker and its crew Friday.

Read: Iran seizes British-flagged oil tanker — here’s what you need to know about the Strait of Hormuz

Complicating the growing crisis is a leadership contest for the ruling Conservative party in the U.K. that will be decided by Tuesday, with either Boris Johnson or Foreign Secretary Jeremy Hunt, declared prime minister. And the winner — Johnson is the favorite — will immediately face a growing international crisis with Iran.

See: Brace yourselves for Britain’s new prime minister — here’s how markets will react

“It is perfectly possible that he will also adopt U.S. President Trump’s tough stance,” said analysts at Commerzbank in a note to clients, adding that Persian Gulf tensions will “prove a serious obstacle for the European efforts to save the nuclear agreement.”

The region has seen an increase in tensions since the Trump administration pulled out of a 2016 nuclear deal between Iran and major global governments.

The International Energy Agency on Monday said it is “ready to act quickly and decisively in the event of a disruption” to oil flow in the region to ensure adequate global oil supplies.

Meanwhile, tankers are unloading millions of barrels of Iranian oil into storage tanks at Chinese ports 2½ months after the White House banned the purchase of Iran’s oil, Bloomberg reported Monday , citing people familiar with operations at several Chinese ports. The oil stored so close to a key buyer has the potential to push down global prices if Chinese refiners decide to draw on it or if U.S. sanctions are lifted, the report said.

Oil prices were pressured last week on signs the U.S. and Iran were moving closer to negotiations over Tehran’s missile program. Data showing a smaller-than-expected weekly fall in U.S. crude supplies and sizable gains in petroleum product stocks, along with the recovery in Gulf of Mexico oil production in the wake of Hurricane Barry, and expectations for a slowdown in demand, all helped push prices lower.

“While cooler windows can mix into the weather pattern, we favor a hotter than normal overall skew into the balance of the summer season, helping to support natural gas prices, at the least allowing the [$]2.25 support level to hold,” analysts at Bespoke Weather Services said Monday.