Mideast instability may lead to a 10%-15% oil price premium for oil: analyst 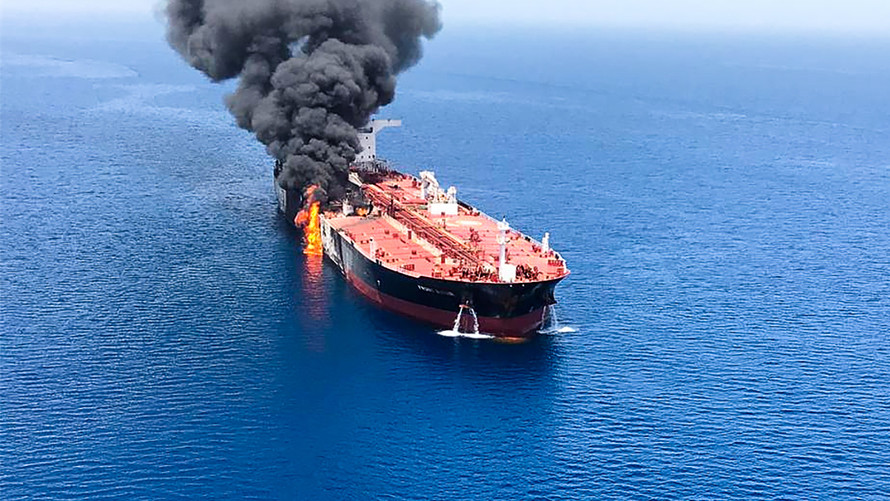 AFP/Getty Images
A picture obtained by AFP from Iranian News Agency ISNA on June 13, 2019 reportedly shows fire and smoke billowing from Norwegian owned Front Altair tanker said to have been attacked in the waters of the Gulf of Oman.

Crude futures settled higher on Friday, a day after an attack on two tankers in the Strait of Hormuz triggered concerns about disruptions to the global flow of oil and prompted a rally in prices.

Despite Thursday’s price climb of more than 2%, however, oil futures suffered a loss for the week, with U.S.-China trade tensions continuing to feed expectations for a slowdown in energy demand. In a report Friday, the International Energy Agency cut its global oil demand growth forecast and said there’s “plentiful’ supply to meet that growth.

“Geopolitical unrest is going to provide general support for prices, and depending on events, create sharp spikes higher but at the same time, supply and demand fundamentals continue to deteriorate,” said Tyler Richey, co-editor of Sevens Report Research.

West Texas Intermediate crude for July delivery  rose 23 cents, or 0.4%, to settle at $52.51 a barrel on the New York Mercantile Exchange. The tanker attacks drove a 2.2% gain for oil on Thursday, but prices failed to recoup the 4% loss from Wednesday. Front-month contract prices lost 2.7% for the week.

U.S. Secretary of State Mike Pompeo, accused Iran of orchestrating a series of attacks on tankers in the Strait of Hormuz on Thursday to get the U.S. ease up on sanctions. The narrow waterway is seen as the world’s most sensitive choke point for transporting crude.

“Basically, Iran is seeking to poke the bear just short of war,” pressuring the Trump administration to ease sanctions, Marc Bruner, chief executive officer of natural-resources company Fortem Resources, told MarketWatch. “There’s no doubt this will be a nasty situation for months to come.

“There will be instability in the Middle East until after the [U.S. presidential] election,” he said. “This will be reflected in the jittery oil markets. Till then, we’ll see a trend towards the upside, probably around a 10%-15% premium for oil.”

While Iran has denied any involvement, the U.S. military on Friday released a video showing what it claimed was Iran’s Revolutionary Guard removing an unexploded limpet mine from one of the oil tankers targeted near the key waterway.

Read: Escalation in Mideast oil attacks could add $7 per barrel to prices

Thursday’s gains came on the heels of sharp losses for oil on Wednesday, driven by a bigger-than-expected climb in U.S. crude inventories. WTI slid 4% to $51.14 on Wednesday, marking the lowest front-month contract finish since Jan. 14, according to Dow Jones Market Data. Simmering worries about energy demand on the back of growing U.S.-China trade tensions also pressured the commodity.

In closely watched oil-market report out Friday, the IEA downgraded its 2019 forecast for global oil demand for a second straight month, citing, in part, a global economic slowdown. The agency cut its oil demand growth forecast to 1.2 million barrels a day from 1.3 million barrels a day the previous month. The Organization of the Petroleum Exporting Countries had also cut its forecast for growth in world oil demand this year.

“Meeting the expected demand growth is unlikely to be a problem,” the IEA said. “Plentiful supply will be available from non-OPEC countries,” with the U.S. contributing 90% of this year’s 1.9 million barrel a day increase in supply.

For 2020, the IEA said oil demand is expected to climb to 1.4 million barrels a day, with nonmembers of the Organization for Economic Cooperation and Development [OECD] the main drivers of demand growth, although the OECD nations will also contribute a significant 520,000 barrels a day on the back of “petrochemical cracker plant additions in the U.S. and higher economic growth.”

The market is also awaiting a decision by OPEC and its allies on whether to extend their production-cut deal past the end of this month, when it expires.