‘You heard us yelling there that we were media, but they don’t care, they’re being indiscriminate’ 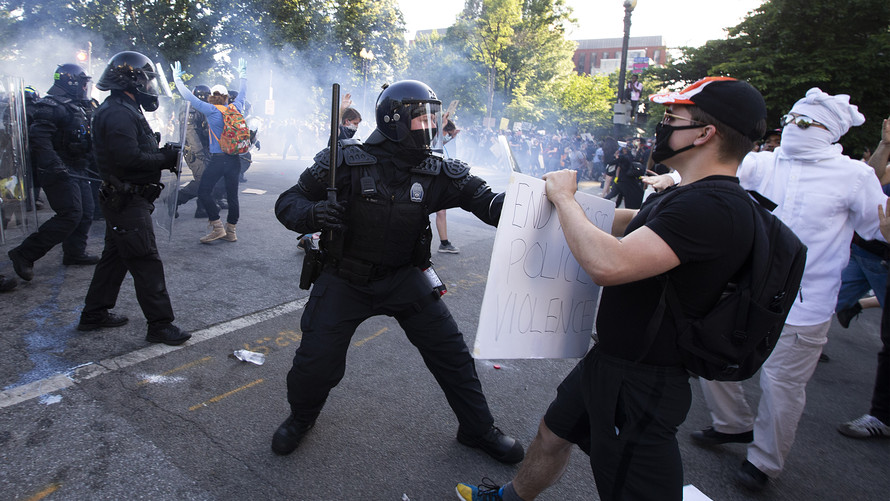 AFP via Getty Images
Police officers clash with protestors near the White House on Monday evening, as protests continue against the death of George Floyd in police custody in Minneapolis.

‘We’ve been fired at with rubber bullets.’

Riot police near the White House did not discriminate between the media and protestors, as they charged the crowds Monday evening, ramming a freelance cameraman Timothy Myers live on air and, according to Amelia Brace, the reporter for “Sunrise Live” in Australia, reportedly hitting another cameraman with rubber bullets.

Brace was reporting a block from the White House when riot police charged the crowd in an effort to clear the area for President Donald Trump to leave the White House to pose for cameras outside a church with a bible on Monday evening. “We’ve been fired at with rubber bullets. My cameraman has been hit,” she told the audience.

At that moment the police charged the crowd, and her cameraman, live on camera during the Australian morning television show broadcast. “You heard us yelling there that we were media, but they don’t care, they’re being indiscriminate,” Brace said. Footage shows the reporter being hit by a police truncheon as she walks away. Channel 7 in Australia called the actions by the riot police “wanton thuggery.”

Brett McGurk, a U.S. diplomat, lawyer, and academic who has also served in senior national security positions under Presidents George W. Bush, Barack Obama, and Donald Trump — most recently, he was the Special Presidential Envoy for the Global Coalition to Counter ISIL. He tweeted: “Here’s how this scene was viewed live in Australia. One of America’s closest and most dependable allies. Rendered speechless.”

Craig McPherson, Seven’s director of news and public affairs in Australia, said the country’s Prime Minister Scott Morrison had contacted the Australian embassy in Washington, D.C. demanding an investigation. (Earlier Monday before a photo op with a bible outside St. John’s Episcopal Church near the White House, Trump said he was “an ally of all peaceful protesters.”)

ABC /zigman2/quotes/203410047/composite DIS -2.60%  reporter Ben Siegel shared another view of the altercation with Myers and Brace on Twitter /zigman2/quotes/203180645/composite TWTR +3.23% showing riot police ramming Myers’s camera and punching the camera live on TV. Siegel’s tweet went viral, and has been retweeted over 32,000 times and liked by over 43,000 people on the social network.

Meanwhile, President Trump late Monday threatened to mobilize the U.S. military to keep the peace across the nation, following days of violent protests. Speaking at the Rose Garden of the White House, Trump derided governors for not acting more harshly against demonstrators, and said he was deploying “heavily armed” soldiers and federal police in Washington to quell protests.

‘I am mobilizing all federal and local resources, civilian and military.’

“I am mobilizing all federal and local resources, civilian and military, to protect the rights of law abiding Americans,” Trump said, citing the Insurrection Act of 1807. “Today I have strongly recommended to every governor to deploy the National Guard in sufficient numbers that we dominate the streets. Mayors and governors must establish an overwhelming presence until the violence is quelled.”

Washington’s mayor condemned the violent crackdown. “I imposed a curfew at 7 p.m. A full 25 minutes before the curfew & w/o provocation, federal police used munitions on peaceful protestors in front of the White House, an act that will make the job of @DCPoliceDept officers more difficult. Shameful!” Mayor Muriel Bowser tweeted . (New York City imposed a curfew of 8 p.m. to 5 a.m. in an effort to prevent more looting of stores after dark.)

Tensions are increasing on the streets across the U.S. The Rev. Mariann Budde, bishop of the Episcopal Diocese of Washington, told the Washington Post that she did not know of Trump’s plans beforehand. “I am outraged,” she told the Post, saying Trump used the church “as a prop.” Budde said, “Everything he has said and done is to inflame violence. I don’t want President Trump speaking for St. John’s.”

The number of confirmed COVID-19 cases and the number of deaths continues to rise. As of Tuesday evening, there are 1,831,435 confirmed cases of COVID-19 in the U.S., and 106,180 deaths, and 29,968 deaths in New York, the largest of any state in the country. Worldwide, there were 6,372,447 confirmed cases and 379,709 deaths, according to Johns Hopkins University’s Center for Systems Science and Engineering.

The Dow Jones Industrial Index /zigman2/quotes/210598065/realtime DJIA +1.06%  and the S&P 500 /zigman2/quotes/210599714/realtime SPX +1.49%  closed slightly higher Tuesday, as investors weighed the impact of the political unrest over the death of George Floyd in police custody in Minneapolis, as well as possible progress in COVID-19 vaccine research, and fears of further deterioration of trade relations with China. The markets are digesting the escalating social unrest, and COVID-19, and the effects that may have on corporate earnings.

(Mike Murphy contributed to this story.)