One way to hedge against currency wars and oil


Stocks and oil fall hard, with oil down 4% at $45 the headline of the day so far. Ugly day, and coming on top of the recent major volatility, not terribly unexpected. The more volatile it gets near-term, the more likely the market’s path of least resistance gets lower. Easy does it for now.

I often talk about how it's not necessarily the direction, but it's the speed and magnitude of the moves that matter in currencies (and Treasurys). This collapse in the $EURUSD since late October is stunning.

The U.S. dollar is seeing the second-fastest six-month rise in 40 years . 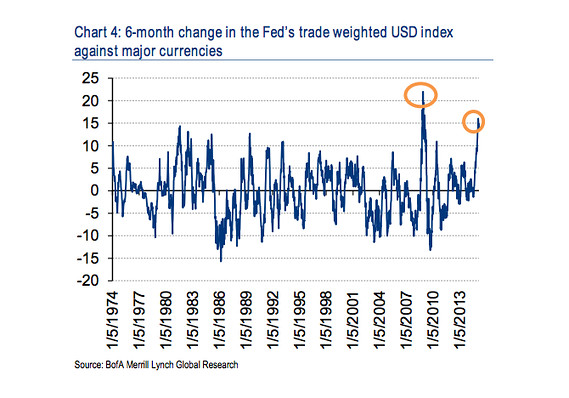 The #CurrencyWars I write about all the time as potential Black Swan catalysts are increasingly looking like potential #BlackSwan catalysts sooner rather than later. Nothing to panic over yet, but be careful and move slow. Nothing wrong with being patient. 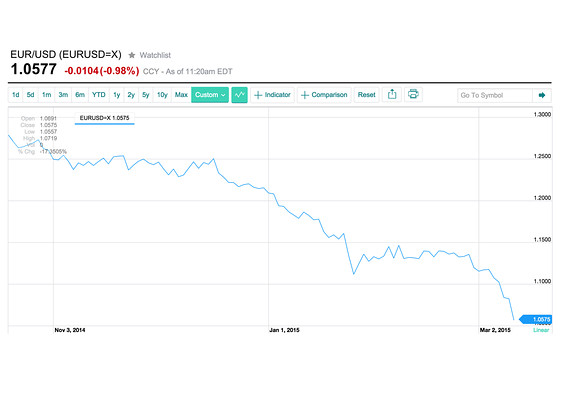 Meanwhile, this relentless march higher in the value of the U.S. dollar is exacerbating the pain in the energy/oil sector. And that's still a sector I am avoiding. No reason we have to try to nail the bottom if and when energy finally does bottom.

Anyway, over the last few years, I've repeatedly said that "Most scenarios favor the U.S. dollar vs. other currencies in a currency war." That is still the case. But the magnitude and speed of this euro vs. dollar collapse is still stunning. There's obviously a flight-to-safety aspect to it, and many, many other factors.

I own some Select Sector SPDR-Financial ETF /zigman2/quotes/209660484/composite XLF -0.19%  puts as I'd outlined in New risks lead to a new hedge. My XLF puts are mostly a hedge for our broader net-long exposure in the event this market does pull back big at some point ... and they've got the currency wars and energy collapse as potential catalysts, too. The Fed's stress tests of the big banks is not even on my radar other than knowing that the more confidence the Fed has in these banks' balance sheets, the less we should.

Finally, here's a well-phrased note on all of this from Danny Van den Berghe because these are the things "Black Swan Events" can eventually be made of:

"If you thought Greece is a mess, remember that Syriza election was only an appetizer for things to come." Check out the muddied situation in France .

The stock markets have pulled back 5%-10% from their all-time-high levels a few days/weeks ago, and I'm getting more bullish as it goes lower. Trying to time a short-term move in the stock market isn't a way to successfully build your wealth over time, so I wouldn't worry too much about the path of least resistance anyway. Just slowly scale into the best Revolutionary stocks you can find, and slowly navigate these ups and downs that always happen in the markets.