Overstock is more valued as a crypto company, making it a new-age Yahoo

Overstock stock pops after earnings, but market valuation is about the same as its reported valuation of blockchain startup 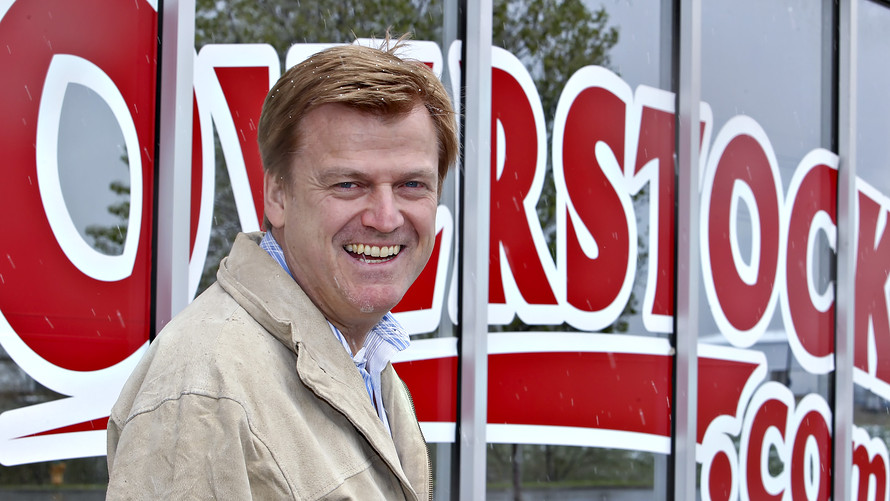 Bloomberg
Overstock Chief Executive Patrick Byrne is focusing far more on his blockchain attempts than the e-commerce business of late.

Overstock.com Inc. is starting to become another Yahoo, but for the blockchain age.

Before Yahoo Inc. sold itself to Verizon Communications Inc. /zigman2/quotes/204980236/composite VZ -1.76%  last year for $4.48 billion, it was valued by investors mostly for its hefty stake in Alibaba Group Holdings /zigman2/quotes/201948298/composite BABA +0.12% , the Chinese e-commerce giant. Today, that stake, along with a stake in Yahoo Japan, sits in a holding company called Altaba Inc. as investors wait for a tax-free sale that may never occur, while the core Yahoo that users know is part of Verizon’s Oath, along with AOL.

Overstock.com /zigman2/quotes/200022359/composite OSTK -3.28% would seemingly welcome a similar acquisition of the core business it is known for, as it is now being valued more for its blockchain efforts, which are still in their early stages, as its e-commerce business lags.

In a letter to shareholders Thursday, Chief Executive Patrick Byrne said that “an investor lamented to me that Overstock is among the most difficult-to-value stocks on Wall Street.”

But it was clear that investors were looking at Overstock for its investments in blockchain and cryptocurrency. Its shares jumped 20% at times Thursday in after-hours trading on news that GSR Capital, a group of Chinese investors in Hong Kong, will be investing a total of $375 million in both tZero, a blockchain subsidiary 80% owned by Overstock, and Overstock itself. The deal includes a $270 million investment in tZero, which Overstock said gives the startup a pre-money valuation of $1.5 billion. That is more than Overstock’s total current market cap as a public company, which was about $1.1 billion at the close of trading Thursday.

The icing on the cake was that as part of the deal, GSR is also buying 3.1 million shares in Overstock at a 5% discount to its closing stock price on Aug. 1 and buying tokens in tZero’s recent security-token offering from Overstock, which acquired the tokens in exchange for debt that the subsidiary owed to its parent company. In total, Overstock said tZero raised $134 million in its token offering to obtain that high valuation.

Meanwhile, there was not much positive news in the core e-commerce business. Overstock’s earnings (actually, its net loss) was only found at the bottom of the complex announcement, which focused more on tZero and the investment by GSR. There were no solid updates on the ongoing effort to sell the e-commerce business, other than Byrne’s brief response to a conference-call question that the company has made some progress and spoken to new players about a potential deal.

The situation brings to mind the death march Marissa Mayer trudged through as Yahoo sought to sell its core business and keep its other assets, but at least Yahoo held stock in an actual physical company. Even if the much-dreaded tax issues end up making Altaba worth less than previously expected, investors will be happy to finally see a return.

With Overstock, as more attention becomes focused on its young blockchain business, the investment becomes riskier. Apparently, it was a tricky sell in Asia too. Byrne said that while the first three people he met with were interested in tZero’s offering, “it proved extraordinarily difficult to get money out of Asia,” he said. “That is what slowed things down so much. This is the world’s first security token.”

Byrne says all the right things and is focused on all the hot areas of the crypto market. He said tZero will enter the digital wallet arena with a startup called Bitsy, one that promises to solve the problem around lost keys to access digital coins and potentially challenge Coinbase. Medici Ventures, a subsidiary of Overstock, owns 33% of Bitsy. But so far, blockchain and crypto is still far from contributing to the overall revenue. Overstock did see a gain of $6.8 million in the quarter from cryptocurrency purchases, and Byrne said Overstock now owns some Ravencoin.

Investors right now are betting that tZero’s efforts in the crazy, crowded world of cryptocurrency will fare better than its aging e-commerce business. That’s a pretty risky bet.

Get news alerts on Overstock.com Inc. — or create your own.