A parabolic rally marks the terminal stage of a bullish trend. Every rally in history that went parabolic ended in a drastic drop. Many have never reclaimed the heights of their glory days. Crowds pour their money into parabolic moves, but when the gravity kicks in and the love affair ends, bag holders are hurt and disgusted by horrendous down moves.

To recognize parabolic rallies and to profit from them, we use a clearly defined set of technical rules. A parabolic rally has three parameters:

When a market moves outside of its monthly 3-ATR channel for two consecutive months, the monthly 5MA is within 20% of the 3ATR and it has not experienced a closing drawdown of more than 15% in the past six months, we consider this a parabolic move.

A market that goes parabolic does not have to crash immediately. A parabolic move can persist beyond any logical measure, but the longer it lasts, the more vicious the subsequent crash. Let's review several examples. 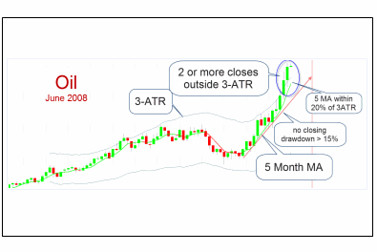 This chart shows a parabolic move in crude oil in 2008. Oil closed outside its monthly 3ATR for the second time on June 2008. Goldman Sachs predicted that oil would hit $200 per barrel, and many market participants believed oil could only go up.

Oil topped out the following month. The move back into the 3-ATR channel and subsequent break of the monthly 5-MA sent oil crashing.

This chart shows the tech bubble that went parabolic in 2000. Everyone "knew" that the tech stocks could only go up, and there was a mad rush into their shares.

In April 2000 the Nasdaq bubble popped, and the tech-heavy index never reclaimed its glory days' peak.

Last year we saw silver stage a parabolic rally. In April 2011, silver closed above the monthly 3ATR for the third consecutive month. Many thought the metal could do nothing but levitate, with the talk of a $100/oz target.

The following month saw the top in silver, as it moved back into the 3ATR channel and closed below its 5MA. The highs of that year have not been seen again.