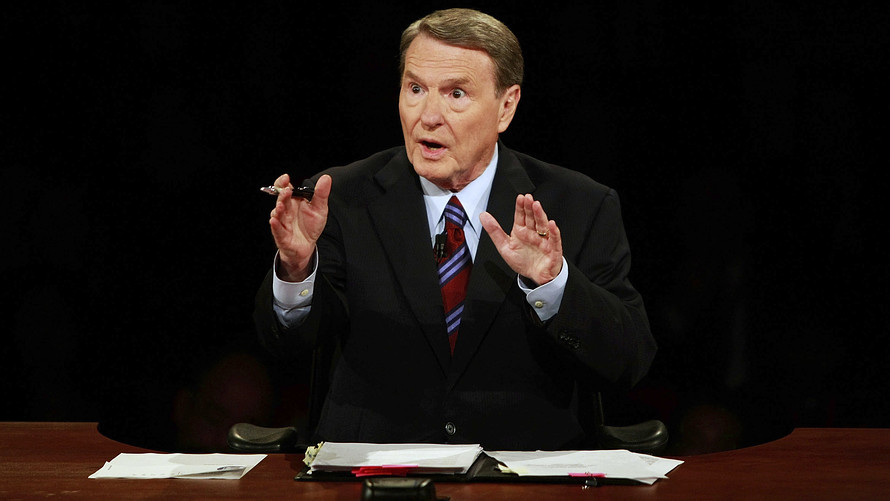 NEW YORK (AP) — Jim Lehrer, co-host and later host of the nightly PBS “NewsHour,” which for decades offered a thoughtful take on current events, has died, PBS said Thursday. He was 85.

Lehrer died “peacefully in his sleep,” according to PBS. He had suffered a heart attack in 1983 and more recently, had undergone heart-valve surgery in April 2008.

For Lehrer, and for his friend and longtime partner Robert MacNeil, broadcast journalism was a service, with public understanding of events and issues its primary goal. Lehrer was also a frequent moderator of presidential debates.

“We both believed the American people were not as stupid as some of the folks publishing and programming for them believed,” Lehrer wrote in his 1992 memoir, “A Bus of My Own.”

“We were convinced they cared about the significant matters of human events. ... And we were certain they could and would hang in there more than 35 seconds for information about those subjects if given a chance.”

The half-hour “Robert MacNeil Report” began on PBS in 1975 with Lehrer as Washington correspondent. The two had already made names for themselves at the then-fledgling network through their work with the National Public Affairs Center for Television and its coverage of the Watergate hearings in 1973.

“I’m heartbroken at the loss of someone who was central to my professional life, a mentor to me and someone whose friendship I’ve cherished for decades,” said Judy Woodruff, anchor and managing editor of the PBS NewsHour, in a statement.

Politics, international relations, economics, science, even developments in the arts were all given lengthy, detailed coverage in their show.

“When we expanded to the hour, it changed from being a supplement to an alternative,” Lehrer said in 1990. “Now we take the position that if you’re looking for a place to go every 24 hours and find out what’s happened and get some in-depth treatment, we’re the place.”

Lehrer moderated his first presidential debate in 1988 and was a frequent consensus choice for the task in subsequent presidential contests.

“Anybody who would say it’s just another TV show is a liar or a fool,” he once said. “I know how important it is, but it’s not about me. It’s what the candidates say that matters.”

He also anchored PBS coverage of inaugurations and conventions, dismissing criticism from other TV news organizations that the latter had become too scripted to yield much in the way of real news.

“I think when the major political parties of this country gather together their people and resources in one place to nominate their candidates, that’s important,” he told the Associated Press in 2000. “To me, it’s a nonargument. I don’t see why someone would argue that it wasn’t important.”

Naturally, Lehrer came in for some knocks for being so low-key in the big televised events. After a matchup between George W. Bush and Al Gore in 2000, David Letterman cracked, “Last night was probably the first and only that time Jim Lehrer [was] the most exciting person in the room.”

But the real-life Lehrer — who followed a tradition of buying a new tie for good luck before each debate — was more colorful than he might have seemed on PBS.