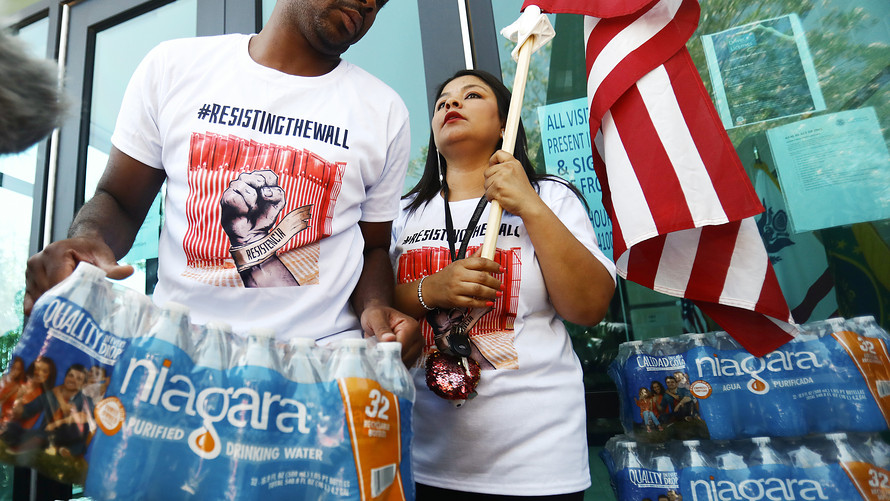 Mario Tama/Getty Images
Protesters place bottled water in front of the U.S. Border Patrol facility where lawyers reported that detained migrant children were held unbathed and hungry in Clint, Texas. The protesters attempted to deliver water and diapers to the facility but the front door was locked.

Surprise inspections by the Department of Homeland Security have uncovered “dangerous overcrowding” in facilities where immigrants are being detained at the border, leaving some Americans to wonder once again how they can help detained families and children.

A report by the DHS Office of Inspector General detailed how inspectors saw more than 50 children younger than 7 years old, some of whom had been detained more than two weeks, despite a rule that the Border Patrol can only detain children for 72 hours. During unannounced visits, inspectors saw that at three of the five facilities, children had no access to showers, some had limited access to a change of clothes, and there were no laundry facilities. “While all facilities had infant formula, diapers, baby wipes, and juice and snacks for children, we observed that two facilities had not provided children access to hot meals...until the week we arrived,” inspectors said — despite a Border Patrol policy requiring hot meals.

“We are concerned that overcrowding and prolonged detention represent an immediate risk to the health and safety of DHS agents and officers, and to those detained,” the report said.

The DHS report is the latest firsthand account of deplorable conditions inside detention facilities.

After lawyers reported seeing detained children held in filthy conditions with no medical care, soap or toothbrushes, a Texas man and some friends brought $340 worth of diapers, soap, wipes and toys to a detention facility in Clint, Texas, but U.S. Border Patrol agents reportedly ignored his donations, according to the Texas Tribune .

The incident struck a nerve with many Americans, but there are plenty of more effective ways to help, experts say.

The thwarted donations come as officials say they’re overwhelmed by an influx of migrants at the U.S.-Mexico border and don’t have the resources to quickly process them . CBP officials have said they’re supplying children basic necessities, but they’ve also admitted that the children are in less-than ideal conditions, because they’re being held in facilities designed to handle adults for very short periods.

President Donald Trump signed the Senate version of an emergency funding bill to send $4.6 billion to the border .

The Border Patrol said it couldn’t legally accept the donated items (more on that below) and many observers, including Chelsea Clinton , were outraged. But the story was also a reminder that donating tangible goods is sometimes not the most effective way to help people in dire circumstances.

People are often moved to act after a natural disaster or other crisis, but sometimes that impulse isn’t as helpful as it seems, said Ashley Post, spokeswoman for the charity rating website CharityNavigator. Throwing clothes and other supplies in a box and sending it to people who’ve just lost their house may feel like the right thing to do, but such donations can go to waste and actually put a burden on organizations.

‘It’s always best to donate cash in a situation following a disaster or any type of crisis. It allows the charities to be more flexible in their response and adapt to changing needs.’

Officials in California had to ask do-gooders to stop sending donations after devastating wildfires last year because they were “inundated” with generous but ultimately useless clothes and other supplies. Sometimes charities are even forced to throw out donations that they can’t quickly distribute — clothes intended for victims of the 2004 Indian Ocean tsunami had to be burned.

“You see a child and you’re like, that could be my kid,” Post said. “You personalize it and think, if that were me, what would I want?” While donating a tangible item may feel good, it can be tricky for people who aren’t experienced in disaster relief to collect and ship those items to the right place, Post said.

Sending money may feel a little “cold,” but it’s usually the best way to help, she said. “It’s always best to donate cash in a situation following a disaster or any type of crisis. It allows the charities to be more flexible in their response and adapt to changing needs.”

However, that doesn’t mean that donating supplies is always a fruitless gesture. Many seasoned nonprofits are in fact equipped to do this. To find reputable ones, check CharityNavigator’s list of highly-rated charities working with immigrants and refugees. The Texas Tribune and New York Times also published lists of groups, and so as the American Bar Association .

Immigrant children will need help long after they get released

The children detained in deplorable conditions are in a painful, but relatively brief, chapter in their experiences as immigrants, said Kali Cohn, community education and advocacy director at Human Rights Initiative of North Texas in Dallas.

They’re only supposed to be in custody for a short period, but that doesn’t appear to be the case at facilities like the one in Clint, Texas, Cohn said. When a child arrives at the border, the Border Patrol has 48 hours to figure out whether they’re an unaccompanied minor. They then have 72 hours to get them into an Office of Refugee Resettlement shelter. Children are supposed to be released to an adult sponsor in the U.S. as quickly as possible, after officials conduct security checks to make sure the adult is a suitable guardian. Nationwide, children have been spending an average of about 48 days in ORR shelters, Cohn said.

The children face “tremendous needs” after they’re released, Cohn said. She likened the experience to losing one’s house in a fire. First you need firefighters to put out the flames, then you need help rebuilding the actual house.

“Although there certainly is a need for people to put pressure on our government to end these awful conditions, there is also a need for people to donate to providers who will assist these kids with their legal representation, their medical needs and their mental health needs when they are released from the Border Patrol to their sponsors,” Cohn said.

One quick way to help families separated at the border is to pay their bail so they can get out of custody prior to their immigration hearing. But the children detained in substandard conditions at Border Patrol facilities like the one in Clint, Texas, cannot be bonded out — they’re at the mercy of the system that’s processing them, Cohn noted. However, in some cases, their parents or adult guardians could be released on bond. Nonprofits including RAICES — the group that received more than $16 million in donations from a Facebook /zigman2/quotes/205064656/composite FB -0.14%  fundraiser last year — and Immigrant Families Together take donations to pay detained immigrants’ bail. Average bail amounts have increased from about $1,500 to $20,000, according to Immigrant Families Together’s website.

Actually, the government can accept donations

A federal statute bars the government from accepting donations, but there are exceptions, said Kristie De Peña, director of immigration and senior counsel at the Niskanen Center, a center right think tank.

She researched the issue in 2016 on behalf of people who wanted to pay for the government to resettle refugees. She found that the government can in fact take donations — for example, the U.S. Treasury Department accepts donations from people who want to help pay off America’s debt. Some of the agencies that oversee immigration, including the Department of Homeland Security and the Department of Health and Human Services, are allowed to accept contributions as well.

‘[W]e’re not running low on those things. We’re using operational funding to provide those things, but those things are available now and they have been continuously.’

Under U.S. law , De Peña noted, the secretary of Homeland Security can accept any gift if it benefits in some way a school, hospital, museum or an institution under DHS jurisdiction. “I would imagine that someone looking at that would say DHS could accept donations and use them to benefit an institution like a Border Patrol facility that’s under its jurisdiction,” De Peña said. “Theoretically they could potentially accept toothbrushes.”

After the donations of diapers, soap and toothbrushes were turned away, a Border Patrol spokeswoman said the agency would talk to its lawyers “to determine how we can accept donations from the public, in compliance with law and policy.” A Border Patrol official also noted that the agency isn’t running low on supplies — and disputed reports of children not being provided with soap, toothbrushes and adequate food.

“[W]e’re not running low on those things,” an unnamed Border Patrol official said during a press call. “We’re using operational funding to provide those things, but those things are available now and they have been continuously.”