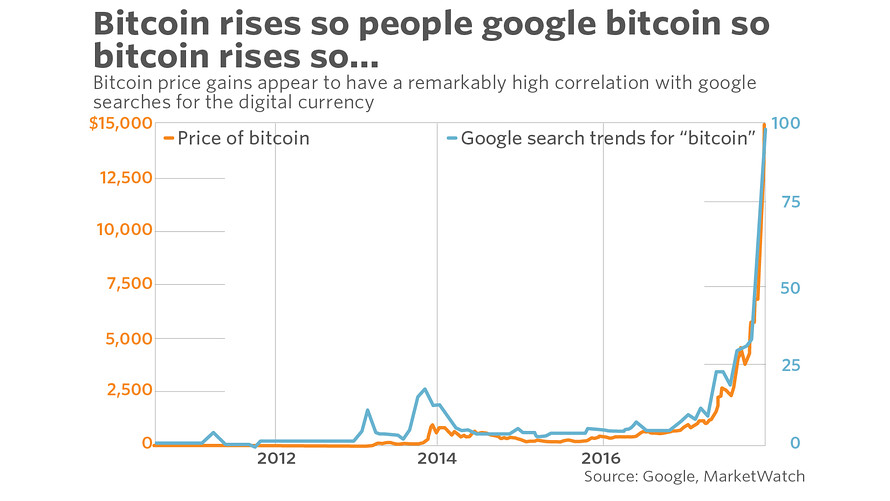 What drives the price of bitcoin? According to one chart, people curious about bitcoin.

Moves in the digital currency seems to have a high correlation with Google searches for bitcoin, as was first noted by Chris Burniske, a bitcoin expert and author of the book “Cryptoassets.”

Back in August, when bitcoin was trading around $4,000 (it has since quadrupled, more or less), Burniske speculated that the gains in the digital currency were prompting people to seek out additional information about bitcoin online, and “that interest further drives the price of $BTC.”

This relationship, which is hardly proven, appears to have continued, as seen in the above chart, which compares bitcoin’s price against Google search trends.

Don’t miss: Here’s what bitcoin’s monster 2017 gain looks like in one humongous chart

The bitcoin-google connection does have some anecdotal support. Reportedly, trading platform Coinbase added 300,000 accounts in the week following Thanksgiving, and it was speculated that advocates pushed for it around the dinner table.

Read: Forget about missing out on bitcoin mania, be glad you didn’t short it

Coinbase subsequently saw so much activity the platform suffered an outage, and on Thursday, a day when bitcoin hit its latest in a series of records—prompting heavy media coverage and undoubtedly more internet interest—Coinbase tweeted that it was “experiencing record high traffic,” which was causing some customers to have slow performance or issues logging into their accounts.

The growth in bitcoin this year has come alongside growing interest in cryptocurrencies overall; the entire universe has a market capitalization of more than $400 billion, with bitcoin accounting for more than half of that. Currently, bitcoin has a market cap of about $266 billion, making it larger than all but 12 components of the S&P 500.

Read: Bitcoin makes up more than half the $400 billion cryptocurrency market. Here’s the rest

Despite that, bitcoin and cryptocurrencies are a fraction of the size of other asset classes like stocks or bonds, which are valued at trillions of dollars. Because of its smaller size and lower liquidity, bitcoin is more susceptible to intraday swings; the digital currency is notoriously volatile.

Among other factors, bitcoin‘s rise has come on signs it is being viewed as a more mature asset class. Cboe Global Markets /zigman2/quotes/208166986/composite CBOE -2.98% is scheduled to launch a bitcoin futures contract on Sunday, while CME Group /zigman2/quotes/210449693/composite CME +3.07% is set to launch its product on Dec. 18.

Futures are seen as potentially further legitimizing bitcoin as an investment, and they could drive additional demand into the space, though other analysts speculate it could bring bitcoin’s rally to a screeching halt.