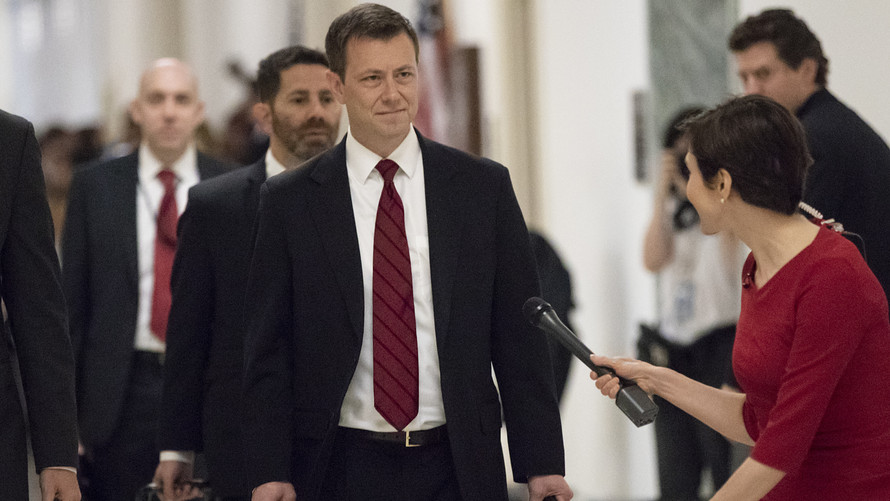 Associated Press
Peter Strzok walks to a hearing room for a 2018 deposition before the House Judiciary Committee.

WASHINGTON (AP) — Peter Strzok spent his FBI career hunting Russian and Chinese spies, but after news broke of derogatory text messages he had sent about President Donald Trump, he came to feel like he was the one being hunted.

There were menacing phone calls and messages from strangers, and anxious peeks out window shades before his family would leave the house. FBI security experts advised him of best practices — walk around a car before entering, watch for unfamiliar vehicles in your neighborhood — more commonly associated with mob targets looking to elude detection.

“Being subjected to outrageous attacks up to and including by the president himself, which are full of lies and mischaracterizations and just crude and cruel, is horrible,” Strzok told the Associated Press in an interview. “There’s no way around it.”

A new book by Strzok traces his arc from veteran counterintelligence agent to the man who came to embody Trump’s public scorn of FBI and his characterization of its Russia investigation as a “witch hunt.” The texts cost Strzok his job and drew vitriol from Trump. But even among Trump critics, Strzok isn’t a hero. His anti-Trump texts on a government phone to an FBI lawyer gave Trump and his supporters a major opening to undercut the bureau’s credibility right as it was conducting one of the most consequential investigations in its history.

‘Without exaggeration, President Trump’s counterintelligence vulnerabilities are exponentially greater than [those of] any president in modern history.’

Trump’s attacks have continued even as two inspector general reports found no evidence Strzok’s work in the investigations were tainted by political bias and multiple probes have affirmed the Russia probe’s validity.

Strzok expresses measured regret for the texts in “Compromised: Counterintelligence and the Threat of Donald J. Trump,” due out Tuesday.

“I deeply regret casually commenting about the things I observed in the headlines and behind the scenes, and I regret how effectively my words were weaponized to harm the Bureau and buttress absurd conspiracy theories about our vital work,” Strzok writes.

Before becoming a virtual household name, Strzok spent two decades at the FBI toiling in relative anonymity on sensational spy cases. He helped uncover Russian sleeper agents inside the U.S., worked the Edward Snowden case and led the investigation into whether Hillary Clinton mishandled classified information. (She did, he writes, but not in a way meriting prosecution.)

After the Clinton case concluded in July 2016, Strzok opened an investigation into whether the campaign of her Republican opponent was coordinating with Russia, conceiving the “Crossfire Hurricane” codename he says proved prescient.

Strzok said he intended for his book to lend insight into the Clinton probe, Russian election interference and, “first and foremost, the counterintelligence threat that I see in Donald Trump.”

“To do that,” he said in the interview, “I wanted to show the reader what happened but also why they should believe me.”

As the investigation progressed, Strzok came to regard the Trump administration’s actions regarding Russia as “highly suspicious” and the president as compromised by Russia, including because of what Strzok says were Trump’s repeated efforts to mislead the public about dealings with Moscow.

Those concerns deepened after Trump fired James Comey as FBI director and bragged to a Russian diplomat that “great pressure” was removed. That interaction was like a “five-alarm fire,” Strzok says, and the FBI began investigating whether Trump himself was under Russia’s sway.

“I hadn’t wanted to investigate the president of the United States,” Strzok writes. “But my conviction on that point had been eroded by Trump’s continued suspicious behavior with the Russians and his ongoing attacks on our investigation.”

Even now, including in an interview Monday with MSNBC , Strzok is of the view that Trump poses a national-security threat. “Without exaggeration,” he said, “President Trump’s counterintelligence vulnerabilities are exponentially greater than [those of] any president in modern history.”

Strzok documents pivotal moments during the investigation, recounting for instance how then–national-security adviser Michael Flynn “baldly lied” to him and another agent about his Russian contacts even though Flynn had not shown customary signs of deceit agents are trained to look for.

Though Trump supporters contend the interview was designed to get Flynn to lie, Strzok says the FBI actually gave him multiple prompts to refresh his memory. While Attorney General William Barr has said the interview was done without a legitimate purpose, Strzok says it was necessary to better understand the Trump orbit’s ties to Russia and Flynn’s own “hidden negotiation with a foreign power that had just attacked our elections.”

Flynn later pleaded guilty to lying to the FBI. Barr’s request — which Strzok called a miscarriage of justice in itself fueled by political interference from the White House, in a Monday interview with MSNBC — to dismiss the case is pending.

In another episode, he says then–Deputy Attorney General Rod Rosenstein asked him to remain behind after a briefing and pressed him skeptically about a perjury investigation into Attorney General Jeff Sessions for statements made at his confirmation hearing. Sessions was never charged. Rosenstein declined to comment.

Strzok’s stint on Mueller’s team was short-lived, upended in the summer of 2017 by the inspector general’s discovery of anti-Trump text messages he’d exchanged during the campaign with an FBI lawyer with whom he had had an extramarital relationship.

He was summoned to meet with Mueller, who in a “soft voice” told Strzok he was being removed.

Transferred into the more bureaucratic Human Resources Division, Strzok says current Deputy Director David Bowdich reassured him the situation could be worse, including if Trump had gotten hold of the texts.

That’s exactly what happened two months later when news broke about the texts and the Justice Department disclosed them to reporters. By his own count, Strzok says, Trump has attacked him since then more than 100 times in tweets.

The text message leak is part of a lawsuit from Strzok, who also conveys discontent in his book at how his long FBI career ended.

After Trump accused Strzok of treason, Strzok appealed to the FBI for a statement condemning the remarks, but got none. The FBI scrambled to remove his access to categories of classified information so Director Chris Wray could inform lawmakers the next day. Senior leadership overturned a lower-level decision in firing him.

Today, Strzok is teaching at Georgetown University and watching from the outside for election interference from Russia, which he warns had information it did not use in 2016.

“I can’t talk in a lot of detail about that,” he added, “but I do think they returned those arrows to their quiver and made them better for this year.”