Business activity index jumps to 21.8 after a 0.3 reading in June 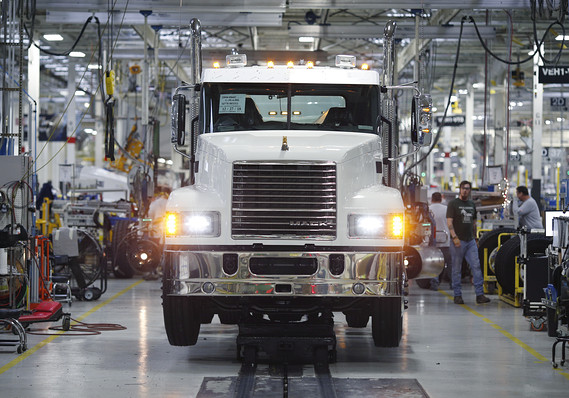 Enlarge Image
A semi truck sits at the end of an assembly line at the Mack Trucks Inc. cab and vehicle facility in Macungie, Pennsylvania.

The numbers: The Philadelphia Fed said Thursday its gauge of business activity in its region rebounded strongly in July after hitting its lowest level in four months in June. 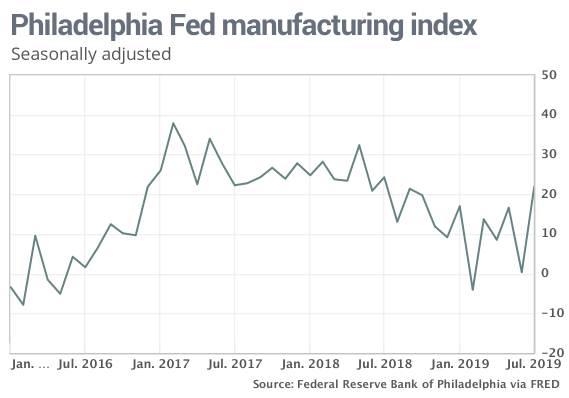 Enlarge Image
Performance of the Philly Fed index since 2016

What happened: The barometer on new orders increased 11 points to 18.9 while the shipments index rose 8 points to 24.9.

The measure on six-month business outlook rose 17 points to 38, its highest reading since last May.

In an answer to a special question, 51% of the manufacturers surveyed said they have seen a “modest“ increase in demand for their products over recent months.

Big picture: The surprising gain offsets some of the gloom surrounding manufacturing. On Monday, a similar survey conducted by the New York Fed saw sentiment rebound partially in July.

Manufacturing has hit a rough patch this year, with the impact of international trade policy tensions and a strong U.S. dollar /zigman2/quotes/210598269/delayed DXY -0.03%  holding down activity. Industrial production has declined for two straight quarters, according to figures released Tuesday.

What are they saying? “The fact that the new orders measure has now posted four very respectable results after weakening significantly in February and March is an encouraging sign, and suggests that the factory sector, while suffering from an inventory correction, weak demand abroad and the effects of tariffs, has certainly not fallen off a cliff,” said Josh Shapiro, chief U.S. economist at MFR Inc.

Market reaction: The jump from the Philadelphia Fed index wasn’t enough to boost stocks as trade worries were weighing on investors. The Dow Jones Industrial /zigman2/quotes/210598065/realtime DJIA +0.40%  opened down 51 points.