Activity index falls to 5.6 below expectations 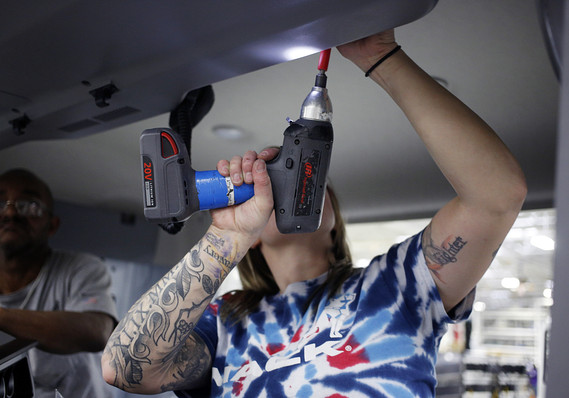 Enlarge Image
A worker uses a power drill to install vehicle parts inside a semi truck cab at the Mack Trucks Inc. cab and vehicle assembly facility in Macungie, Pennsylvania.

The numbers: The Philadelphia Federal Reserve said Thursday its gauge of business activity fell to 5.6 in October from 12 in September. Economists polled by Econoday expected a 7.1 reading. Any reading above zero indicates improving conditions.

What happened: Details were seen as a little more upbeat than the headline. On the plus side, the index for new orders and the number of employees rose. On the negative side, shipments and the average workweek slid.

The measure on six-month business outlook rebounded after a sharp drop in the prior month. 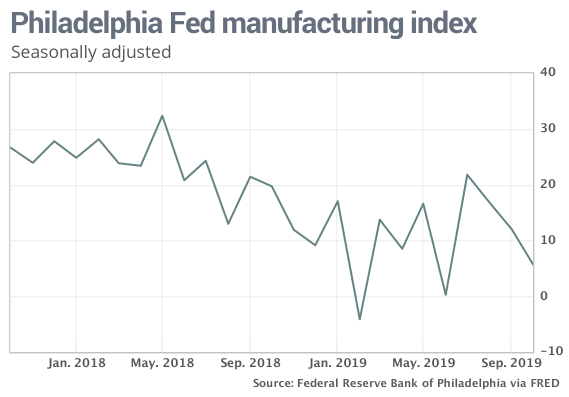 Economists said firms in Philadelphia and New York are less sensitive to the China trade war than manufacturers in other regions.

In September, the ISM s manufacturing index fell to 47.8, the lowest level since June 2009, from 49.1 the prior month. Readings below 50 indicate contraction. The manufacturing sector is in recession, damaged by international trade tensions, weak global growth and a strong U.S. dollar.

What are they saying? “One bright spot from this release is that the forward-looking indicator of general business activity bounced back noticeably in October, perhaps reflecting diminished worries about trade-related tensions and perceived risks of a significant slowdown,” said Jonathan Millar, an economist at Barclays.

Market reaction: Stocks opened higher Thursday getting a boost after U.K. and European Union negotiators agreed on a tentative Brexit deal. The S&P 500 index /zigman2/quotes/210599714/realtime SPX +1.40% was up 17 points to slightly above 3,000.