NEW YORK (MarketWatch) -- T. Boone Pickens has scuttled plans for a giant wind farm in Texas, partly out of difficulty with building transmission lines, the latest sign that efforts to rebuild the nation's electrical infrastructure have been marked by fits and starts.

Hurdles faced by the billionaire financier include lower natural-gas prices, which made power from wind less desirable as an alternative to gas-fired electric plants. 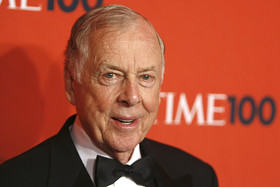 Reuters
'It was a little more complicated than we thought,' Pickens said of the plan.

He unveiled his plan a year ago against a backdrop of record-high oil and gas prices. He set his sights on building as much as 4,000 megawatts of wind power in Pampa, Texas -- an amount equivalent to the electricity made by four nuclear-power plants.

Pickens now plans to build five or six smaller wind farms in the Midwest and possibly Texas, according to published reports on Tuesday.

Another big stumbling block facing Pickens and others is a lack of transmission lines.

At first Pickens proposed building his own lines, but didn't follow through. "It was a little more complicated than we thought," Pickens told the Dallas Morning News.

While the Texas Public Utility Commission announced plans last July to add $5 billion in transmission lines in West Texas, the plans didn't include the region outlined in Pickens' plan.

Instead more plans appear to be crystallizing for transmission lines in the Midwest.

In a related development on Tuesday, ITC Holdings Corp. and MDU Resources Group Inc. /zigman2/quotes/205759027/composite MDU +1.10% said they're teaming up as part of an effort to build 3,000 miles of high-power transmission lines for $10 billion to $12 billion in that region.

The agreement marks an "important milestone" in ITC's effort to build the so-called Green Power Express.

The project will help deliver up to 12,000 megawatts of renewable power to the Midwest and mid-Atlantic regions of the United States.

MDU will collaborate with ITC on development efforts and securing the approvals needed to move the project forward. Green Power Express, LP, will operate as an independent transmission company.

ITC Holdings Corp. announced the Green Power Express project in February, with plans to fix a fundamental problem of the older electric grid -- it's built to carry power from existing plant to big cities, not to channel power generated in the Great Plains.

Green Power Express LP filed an application with the Federal Energy Regulatory Commission (FERC) requesting approval of a revenue requirement formula and incentives for the construction of the power lines.

ITC plans to work with local utilities and wind developers in the region for the build out of the Green Power Express.

In a sign that Wall Street sees solidity in the grid infrastructure business, Standard & Poor's added Quanta Services Inc. /zigman2/quotes/203420082/composite PWR +2.39% to the S&P 500 last month. The company specializes in building transmission lines as well as other businesses.

Steve Gelsi is a reporter for MarketWatch in New York.