Playing at the Margins of a Great Formula

Q: When will this merger be accretive to earnings?
A: My understanding is during the next year or two at worst. My belief with Phelps is that even before copper prices ran up, Phelps was reducing and refining their operating model, cutting their costs of producing copper. Combine that with rising copper prices on the market and that's a great spread. Let's say their cost to produce copper is 60 cents a pound, and they are selling copper on the market place for three bucks. You are talking about a spread of $2.40 or so and beyond, and that's going to the bottom line.

Q: I know that your real-estate position is slightly higher than the asset-allocation target. Why is that, given the rising interest-rate environment?
A: I don't believe that REITs should be valued based on yield or interest rates alone. And a lot of people look at the REIT market like that. I know when the Fed decided to begin to move to increase interest rates everybody was predicting the death of REITs. And had you done that you lost out on some pretty good gains through the rest of 2004 and 2005. I think in a growing economy a diversified investor should have exposures to REITs. They are good growth stories with solid dividends. You've got operations plus the real-estate asset play and, generally, what occurs in a healthy economy is improved real-estate values, whether it is office buildings or manufacturing space or apartment rental rates, especially in the rising interest-rate environments. Retail REITs also benefit because you have more disposable income.

Q: You talk about a strong economy, but most economic forecasters are calling for the U.S. economy to slow to under 3% annualized growth by the end of this year and into next year.
A: My sense is that the economy is a lot stronger than people have given it credit for in the U.S. It has been able to grow even with oil prices per barrel getting into the $60s and $70s and despite two years worth of Fed interest-rate increases. And the California economy has really ramped up growth recently.

Q: What's a REIT that you particularly like right now?
A: One is BRE Properties (ticker: BRE), which owns apartment units in the western U.S. Their primary markets are San Francisco, where I'm located, Los Angeles, San Diego, Seattle, Portland and a bit in Phoenix. As jobs are created, people need places to live. So there is going to be demand for the apartments, raising rents, writing leases for higher rates and renewing them at higher rates, etc.

So you want to see a strong, local economy -- that is one thing that you want to look for. You also want to see a supply constraint with housing, and I think the West Coast has that. You know there are a lot of hills, and there is only so much undeveloped land. The housing market is very strong, prices are high, so there is constraint supply there, and interest rates are high. I think people are going to be renting more before they take the plunge.

Q: Why?
A: For a long time, Disney had management problems, succession issues, all of that stuff. But they have totally revamped their ABC broadcast division, taking it from a laggard to No. 1 or No. 2. So they are able to command higher advertising rates. They've begun to broaden their programming lineup around a few hit shows.

Their cable businesses are very strong, probably the flagship is ESPN, but they've got pricing power on the ad side. They've got pricing power on the cable side to get the operators to carry their channel, so that's positive. They continue to see growth in cash earnings and operating margins in those businesses, which is positive. Then they've got the theme-park business, which is a little slower grower, but it is very consistent and they do a great job. If you have ever been to a Disney park, they do a great job of managing those things.

Disney Europe has begun to stabilize. They continue to see growth in the U.S. parks, and they are working out the kinks in their Disney China.

I, for one, was very happy that they went with Robert Iger as the new CEO to replace Eisner -- management had gotten stale. I think the company needed some new blood, some new energy. I see Disney as a company that is beginning to…create new life for itself, and it is going to move forward. 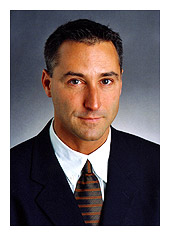 Name : Michael Cuggino Age : 43 Title : President, Permanent Portfolio Family of Funds, San Francisco, Calif. Education : BS in accounting, Bentley College (Waltham, Mass.) Hobbies : Alpine skiing Investment Philosophy In managing the Permanent Portfolio Fund, Cuggino seeks at the very least to preserve an investor's purchasing power. Though there is no official benchmark, Cuggino views the three-month Treasury rate as a "floor." Forty-five percent of the portfolio is invested in U.S. and Swiss bonds. But Cuggino is seeking "a growth kicker" with purchases of precious metals and stocks. He maintains a low level of risk by holding a wider variety of assets than the typical asset-allocation fund.
/zigman2/quotes/203410047/composite