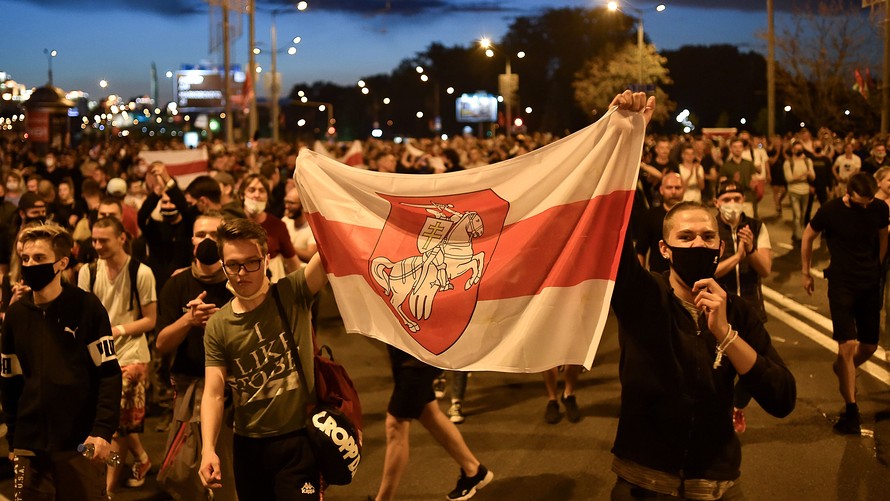 MINSK, Belarus — Phalanxes of Belarusian police in full riot gear violently dispersed thousands of demonstrators who poured into the streets to challenge the early count from Sunday’s presidential election indicating the longtime authoritarian leader won a sixth term by a landslide.

Hundreds of people were detained, according to a leading rights group.

The brutal crackdown that began late Sunday and lasted through the night followed a tense campaign that saw massive rallies against President Alexander Lukashenka, who has ruled the ex-Soviet nation with an iron hand for 26 years.

Tsikhanouskaya rejected the official claims, saying: “I will believe my own eyes — the majority was for us.”

Thousands of her supporters quickly took to the streets of the capital to protest what they saw as official manipulations of the vote. They faced rows of riot police in black uniforms who moved quickly to disperse the demonstrators, firing flash-bang grenades and beating them with truncheons.

After breaking up the big crowds, police relentlessly chased smaller groups of protesters across downtown Minsk for the next several hours.

Several other cities across the country saw similar crackdowns on protesters.

Interior Ministry spokeswoman Olga Chemodanova said that police efforts to restore order were continuing overnight, but wouldn’t say how many people were detained.

Ales Bilyatsky of the human-rights group Viasna told the Associated Press several hundred were detained and hundreds injured in the police crackdown.

“What has happened is awful,” Tsikhanouskaya told reporters Sunday.

An AP journalist was beaten by police and treated at a hospital.

At Minsk’s Hospital No. 10, an AP reporter saw a dozen ambulances delivering protesters with fragmentation wounds and cuts from stun grenades and other injuries.

“It was a peaceful protest, we weren’t using force,” said 23-year-old protester, Pavel Konoplyanik, who was accompanying his friend who had a plastic grenade fragment stuck in his neck. “No one will believe in the official results of the vote, they have stolen our victory.”