‘Despite their ability to connect us to others across the globe, phones may undermine the benefits we derive from interacting with those across the table,’ wrote the authors of one study 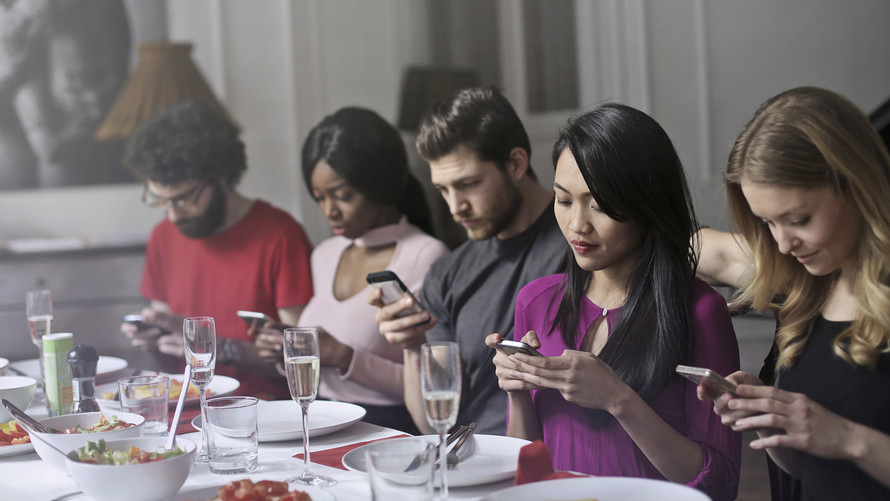 iStock/bowie15
The pontiff encouraged 'communicating in our families' during meals rather than staying glued to cellphones.

Pope Francis wants us all to unplug and socialize during dinner time — and research backs him up.

At his weekly Angelus address on Sunday, the pontiff encouraged a return to “communicating in our families” during meals rather than being glued to cellphones, Reuters reported. “I ask myself if you, in your family, know how to communicate or are you like those kids at meal tables where everyone is chatting on their mobile phone,” he added.

Researchers have grown increasingly concerned about the psychological and social consequences of excessive smartphone use. Meanwhile, some restaurateurs have taken matters into their own hands — including by instituting cellphone bans and incentivizing diners with discounts if they surrender their phones.

Studies support the pope’s case against screen time at dinner time. In one 2018 study published in the Journal of Experimental Social Psychology , researchers found that study participants felt more distracted during mealtimes when their phones were present, thus decreasing their enjoyment of time spent with friends and family.

“This research suggests that despite their ability to connect us to others across the globe, phones may undermine the benefits we derive from interacting with those across the table,” the researchers concluded. They did not single out Apple /zigman2/quotes/202934861/composite AAPL -1.03% , Samsung /zigman2/quotes/209800866/delayed KR:005930 -1.33%  or other smartphone manufacturers.

By putting away the cellphone, people may also save a chunk of change. Based on typical smartphone costs and usage patterns, your kids will end up spending a staggering $75,000 apiece on their phones over the course of their lives, according to a recent estimate by valuation company Flipsy . Americans also spend approximately $88 a year on apps and unlimited data plans typically cost around $80 a month .

In fact, the simple presence of a smartphone or cellphone can serve as a distraction . A 2014 experimental study published in the journal Environment and Behavior found that if either participant in an interaction had a mobile device on a table or in their hand during a conversation, participants rated the conversation quality “less fulfilling” than interactions that happened without such devices. Participants also experienced lower levels of empathy, the study found.

The incidence of head and neck injuries related to cellphone use has risen steadily over the past two decades, according to a recent study.

“Even without active use, the presence of mobile technologies has the potential to divert individuals from face-to-face exchanges, thereby undermining the character and depth of these connections,” the authors wrote.

“Individuals are potentially more likely to miss subtle cues, facial expressions, and changes in the tone of their conversation partner’s voice, and have less eye contact when their thoughts are directed to other concerns in the presence of a mobile device.”

Many people appear to co-sign the pope’s edict on cellphones at the table: Among more than 3,000 adults surveyed by Pew Research Center in 2014, just 12% believed it was generally OK to use a cellphone at a family dinner, compared to 88% who said the opposite. A higher share of respondents, 38%, said cellphone use was generally OK at a restaurant.

This smartphone distraction can also have dire consequences for your health. The incidence of head and neck injuries related to cellphone use has risen steadily over the past two decades, according to a new study from researchers at Rutgers New Jersey Medical School in Newark, with major increases observed after 2007, the year the iPhone was introduced.

An Apple spokeswoman referred MarketWatch to safety information on the iPhone: “Repetitive motion When you perform repetitive activities such as typing, swiping, or playing games on iPhone, you may experience discomfort in your hands, arms, wrists, shoulders, neck, or other parts of your body. If you experience discomfort, stop using iPhone and consult a physician.”

That study, published in the latest edition of the peer-reviewed journal JAMA Otolaryngology-Head & Neck Surgery , analyzed a sample of 2,501 reported emergency-department cases — translating to 76,043 estimated weighted cases — collected by the National Electronic Injury Surveillance System between January 1998 and December 2017. The cases were all specifically related to a cellphone.

Without smartphone distractions, the pope said they “prayed, worked and communicated with each other.”