‘So you’re going to give a speech, or are you going to ask a question?’ DeSantis interrupted 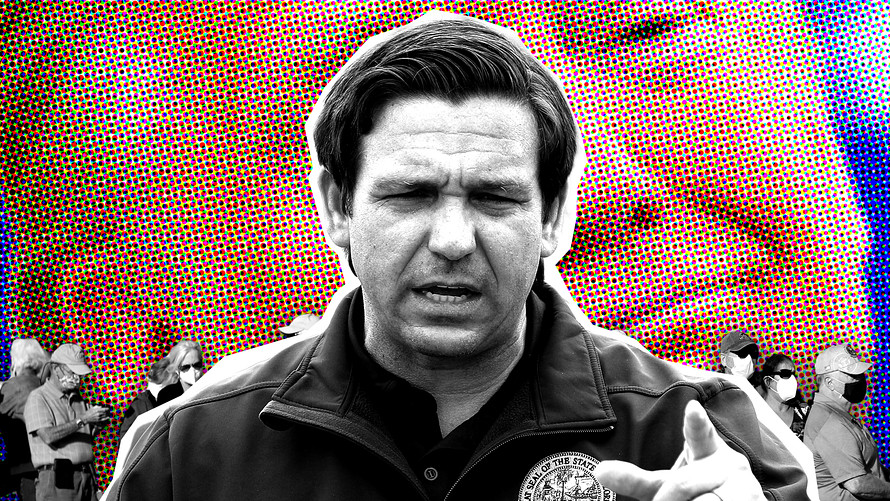 And you thought White House press conferences got testy.

‘So you’re going to give a speech, or are you going to ask a question?’

Local news reports have called vaccination distribution across the Sunshine State a “train wreck” or a “scramble,” with some outlets, including CNN , describing scenes of seniors waiting in hours-long lines outside — sometimes overnight — to get their shots.

Florida isn’t alone in that regard, as the country’s vaccine rollout is nowhere near the targets set. Before lowering its sights twice, by tens of millions of vaccinations, the Trump administration had promised 100 million doses would be delivered by the end of 2020, but as of 9 a.m. on Jan. 4, 2021, just 15.4 million doses had been distributed to states, according to data from the Centers for Disease Control and Prevention.

Flores tried to ask the Republican governor about the issues that Floridians have been facing while trying to get vaccinated. Indeed, local journalists have tweeted that seniors are even asking reporters to book vaccination appointments for them.

“Governor, what has gone wrong with the rollout of the vaccine that we’ve seen phone lines jammed, websites crashing,” Flores began during the Monday presser.

DeSantis interrupted — “There’s a lot of demand” — as Flores attempted to finish her question.

“Excuse me, excuse me, you just said ‘What has gone wrong?’ so I’m answering the question,” DeSantis said, speaking over Flores a second time.

“If I could just complete the question, though,” Flores continued — until DeSantis cut in with, “So you’re going to give a speech, or are you going to ask a question?”

The exchange got more heated once Flores was allowed to finish, as she pressed DeSantis on why some of Florida’s seniors were waiting in lines overnight for the vaccine.

The governor turned the question back on her. “Why did that happen? Did you investigate why?” he asked.

DeSantis said that vaccines were distributed to the hospitals, which in turn decided to dispense the shots on a first-come, first-served basis. “And there’s a lot of demand for it,” he repeated.

The back-and-forth went viral on Twitter overnight Monday into Tuesday, with DeSantis’s name trending, as he was either criticized as condescending and bullying toward the reporter, or, among supporters, showered with praise for standing up to a journalist.

“They are both wrong,” one viewer tweeted . “He should have let her finish, but she is framing the question in a way that blames the state.”

Some critics drew parallels between the way DeSantis handled the exchange and President Trump’s conduct with the media.

Others praised Flores for staying professional and insisting on finishing her question, similar to how Sen. Kamala Harris’s telling Vice President Mike Pence “I am speaking” during the vice presidential debate in October resonated with so many people online, or when an Asian-American reporter for CBS held firm when instructed by Trump to “ask China,” rather than him, about his remarks on coronavirus tests, cases and deaths.

Meanwhile, the U.S. set another COVID-19 hospitalization record on Monday with 128,210 patients, and the country has averaged 214,014 new cases a day over the past week. There have been more than 20 million cases of COVID-19 in the U.S. since the pandemic began, and more than 353,000 people have died.