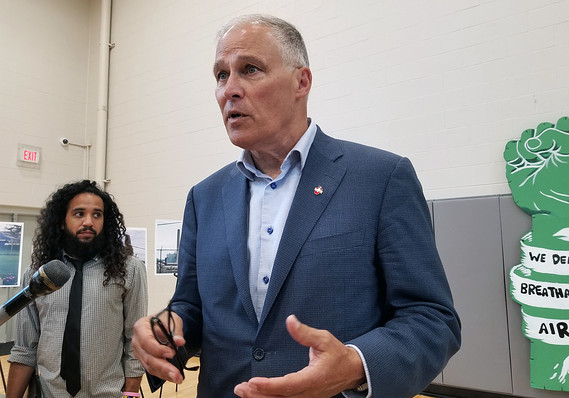 DETROIT (MarketWatch) — Sen. Bernie Sanders came out swinging against the fossil-fuel industry Tuesday night, suggesting at the Democratic presidential debate here that companies should be prosecuted for what he characterized as “destroying the planet.”

“We’ve got to ask ourselves a simple question: What do you do with an industry that knowingly, for billions of dollars in short-term profits, is destroying this planet?” Sanders said during the first night of a second debate round. “I say that is criminal activity that cannot be allowed to continue.”

Washington Gov. Jay Inslee, who has put climate change at the center of his presidential campaign , also raised the possibility of legal action.

“Certainly the executives of any company, including the fossil-fuel industry, that violate the law, should be subject to prosecution,” he told a small group of reporters early Wednesday.

Also see: Here are the 25 Democrats running for president.

“That’s just the law. It’s a decision by the Department of Justice. But I do know that the decisions that are being made are killing people in the United States. That’s something to be taken seriously,” Inslee said. On his website, Inslee discusses moving the U.S. economy off of fossil fuels and says the country “must confront the economic and environmental harm caused by corporate polluters.”

Environmental policy is one of the hot-button issues in the Democratic primary, with the Green New Deal climate plan dividing the candidates. Sen. Elizabeth Warren of Massachusetts supports the plan, and spent part of Tuesday evening pushing back against ex–Colorado Gov. John Hickenlooper, who criticized it.

In advance of the debates, the oil industry stressed its role in job creation and said switching to cleaner natural gas for electricity generation has contributed to lower carbon emissions.

In a statement, the American Petroleum Institute also criticized a hasty transition to alternative energy as unworkable. “Promises of an imminent energy landscape powered entirely by alternative fuels might make for an applause line, but it’s not likely to make for plausible policy,” said the statement.

Inslee spoke to reporters at a forum hosted by the Climate Justice Alliance.