The number of international students at U.S. colleges exceeded 1 million for the first time last year 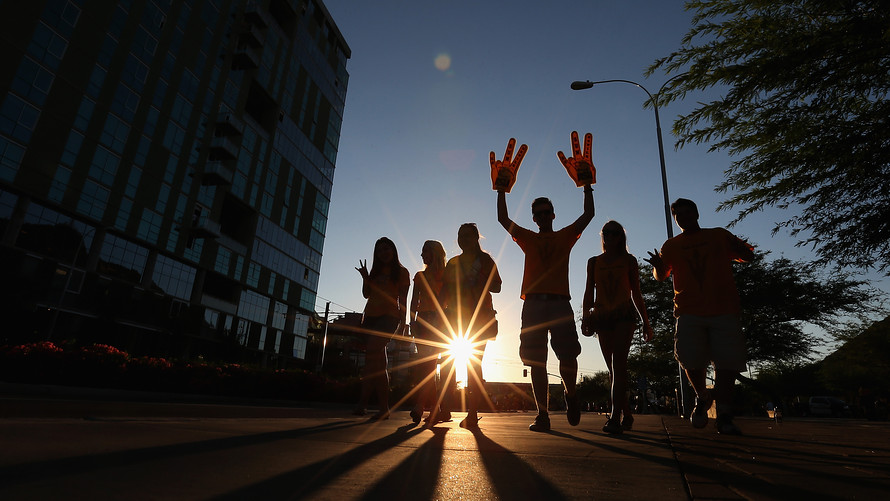 When public colleges are strapped for cash, they turn to international students to fill the void.

For every 10% drop in the level of funding states provided to their public universities between 1996 and 2012, public research universities increased their enrollment of foreign students by 12% and the colleges that spend the most on their students boosted international enrollment by 17%, according to a recent working paper distributed by the National Bureau of Economic Research, a Cambridge, Mass.-based research group. But not all institutions are equally likely to use this approach — it’s those colleges that both have an international reputation and were hardest hit by state cuts that have turned to international students to fill the void, the study found.

Over the past several decades and particularly in the wake of the Great Recession, public colleges have been looking for ways to make up funds they once could count on receiving from their state governments. In the mid-1980s, state governments provided public colleges with about $12,000 per full-time student on average, adjusted for inflation, according to data from the State Higher Education Executive Officers Association and cited in the study. That declined to less than $7,000 per full-time student in the most recent year.

At the same time, the pool of students who are both academically prepared for a U.S. college education and can afford it has skyrocketed, particularly in China, where a growing middle-class has fueled a demand for higher education that can’t be met by the country’s institutions. At public colleges, international students typically pay the full out-of-state price, which is $24,930 on average this academic year, according to the College Board . The average price for a year of public four-year college in-state is $9,650. 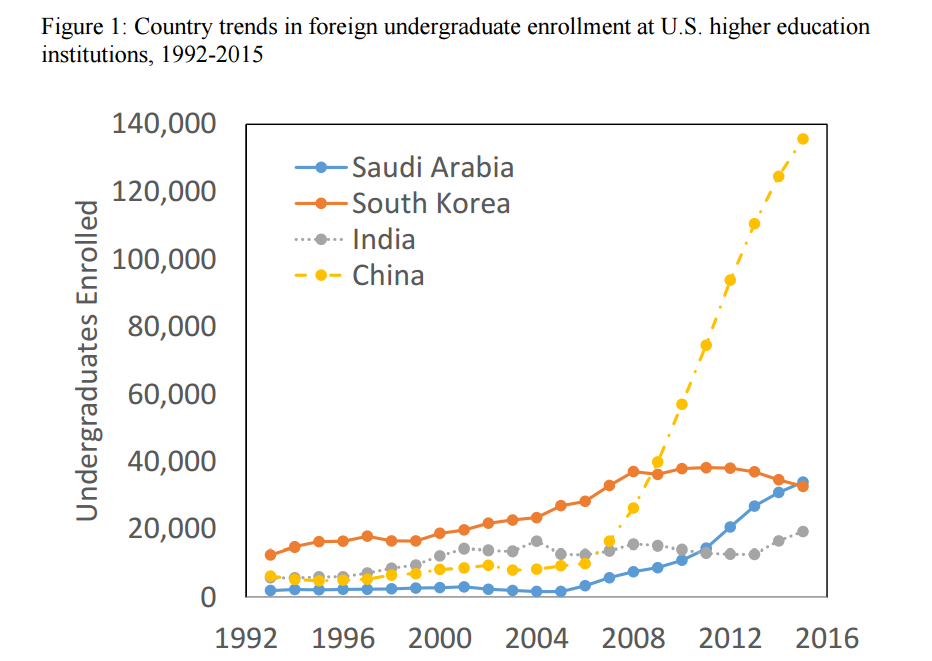 Institute of International Education
The number of Chinese students studying in the U.S. has increased dramatically over the past several years.

The number of international students studying in the U.S. at both private and public colleges surpassed 1 million for the first time during the 2015-2016 academic year, according to a recent report from the Institute of International Education, a nonprofit that works to advance international education. Of those students, more than 30% came from China.

“You might think of this as an industrious response to very challenging fiscal conditions,” Sarah Turner, an economics professor at the University of Virginia and one of the authors of the NBER study.

While certainly savvy, the rise in international students at public colleges comes amid growing concern over the changing role of public universities in today’s environment of declining state funding for public higher education. Once thought of as an engine of economic mobility for local, middle-class or even poor students, public universities, particularly the flagship campuses, are increasingly dominated by wealthier students — whether from in-state, out-of-state or abroad — who can pay the full cost of tuition, or close to it.

Ideally, the increased tuition revenue from wealthier out-of-state students helps a school support more in-state students and provide them with more resources. That may be why the schools that typically spend a lot on their students are more likely to respond to state cuts by boosting international enrollment. And indeed, those students bring in a lot of money — in 2015, international students contributed $30.5 billion to the U.S. economy, according to IIE.

“Every now and then a state legislator will say, ‘Why are international students stealing places from Americans?’ and my answer is, ‘Because you cut the budget so much,’” said Peggy Blumenthal, the senior counselor to the president at IIE. She added: “The money is not just used to replace the state funds, it’s used to keep scholarships available for U.S. kids and it’s used to keep departments open that might have to close.”

But not all public colleges are equally likely or able to increase international enrollment in the face of tight budgets. Elite public schools that can attract the top students from across the U.S. are less likely to rely heavily on international students to make up for budget shortfalls, the study found. At the same time, regional public colleges that may not have enough cachet to attract students from abroad can’t turn to those students to fill their coffers.

Instead, it’s the research universities that may not be in the top five public colleges nationwide, but are still selective who are the most likely to draw international students to make up for declining state funding, the study found.

“Public colleges at every level are impacted by state budget cuts, but the ability for them to offset those cuts is different based on the type of college,” Huelsman said. The schools that educate the bulk of a state’s low-income and minority students are the hardest hit by declines in state funding because they don’t have the escape valve available to the more selective, better-resourced universities, he said. Often the only ways these schools can make up for losses in state funding is by cutting programs and services or increasing tuition.

“The impact of state budget cuts, really is seen at the open access, community college level, places that can’t go to China for a new pool of students,” Heulsman said.