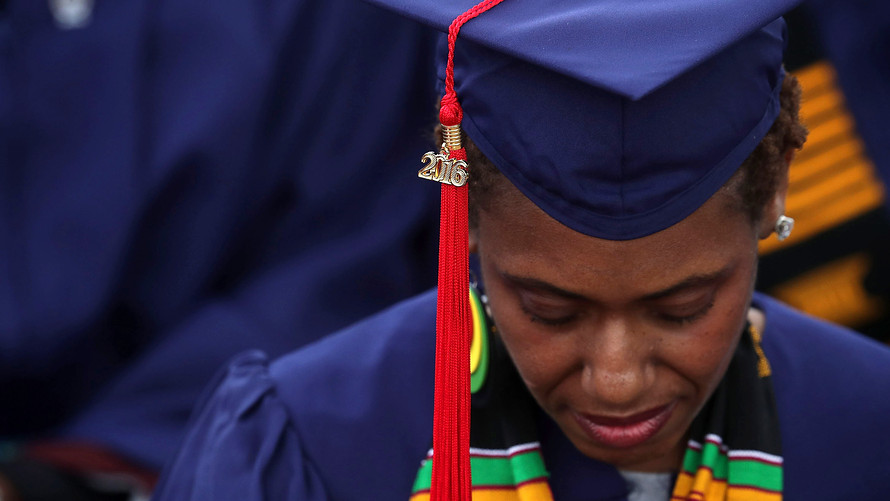 Getty Images
A member of the class of 2016 listens as President Obama addresses the 2016 commencement ceremony at Howard University on May 7, 2016 in Washington, D.C.

Just a few years out of school, black college graduates will have accumulated nearly twice the student debt of their white counterparts.

Black college graduates have an average student loan balance of $52,726 four years after graduating, according to a study released Thursday by the Brookings Institution, a centrist think tank. That’s compared with $28,006 for white graduates, on average.

The findings build on earlier research showing that black students are more likely to borrow and tend to borrow more than white students. But the study indicates that that gap only widens as graduates get further along in their careers and that disparities in borrowing at the outset only explain a small part of the dramatic gulf later on.

Over the past few years, federal and state regulators have increased their scrutiny on the for-profit education sector amid mounting evidence that many players use unseemly tactics to lure students into paying for an education with questionable outcomes.

The paper offers a few theories. One is that a 2006 policy change, which essentially lifted the limits on borrowing for graduate school, disproportionately affected both black students and the for-profit higher education sector. Now graduate students can borrow up to the cost of their program from the federal government. That change may have played a bigger role in black students’ decision to attend because on average they have less parental wealth to draw from than white students. And though graduate school enrollment increased at public and nonprofit private college after the loan limits disappeared, for-profit colleges may have been “most nimble in responding to that new market opportunity,” Scott-Clayton said.

Regardless of the reasons for the gap in debt between recent black and white college graduates, Scott-Clayton said it’s important to highlight because it indicates that even students who graduate college still face challenges repaying their education debts. “Even though, we don’t have to worry about bachelor’s degree graduates in general, these racial differences are striking,” she said. “We cannot assume that just because something isn’t a problem for the majority that it’s not a problem for a significant minority.”