Mary Anne & Pamela Aden are well-known analysts and editors of The Aden Forecast, a monthly investment newsletter that specializes in the U.S. and global stock markets, the precious metals and foreign exchange markets and U.S. and international interest rates and bonds. The Adens are the directors of Aden Research, based in San Jose, Costa Rica, and they are professional money managers. They have authored dozens of reports and articles and have spoken at investment seminars around the world. Their work has been featured in newspapers in several countries, in such publications as Business Week, Forbes, The Wall Street Journal, Money Magazine, Smart Money, Barron's, The London Financial Times, as well as CNBC and the international television documentary, Women of the World. For more information, go to https://www.adenforecast.com/

The interest-rate talk seems never ending. It goes on and on, and we've never seen anything like it. The result of all of this talk on the bond market is not a surprising one. But more on the chatter.

The markets are literally obsessed with what the Fed's going to do, or not do. Any hint of a possible upcoming interest-rate hike sends the markets reeling one way. And when it looks like interest rates are not going to rise, the markets swing the other way.

But despite all the gossip and guesses, the bond market has spoken, and here's what it's telling us.

Bond prices are on the rise, and they're currently near a four-month high (see chart below). Since long-term interest rates move opposite to bond prices, long-term rates are now at a four-month low. 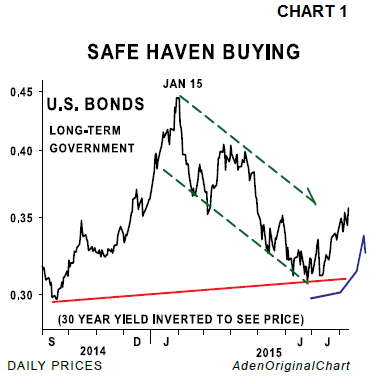 So this current interest-rate decline strongly suggests the Fed is unlikely to raise interest rates in September, and probably not even later this year. This also means bond prices are set to rise further, and the bull market will remain intact.

As our dear friend Chuck Butler reminds us, "Back in 2013, the Fed told us that when unemployment hit 6.2% they would hike interest rates. But that didn't happen.

So what's going on? The answer is pretty simple. Even though Janet Yellen would like to raise interest rates and return to a normal monetary policy, she can't. Aside from the still-sluggish economy and deflationary pressures, inflation has remained below 2% for over three years, and the IMF thinks it's going to stay there until 2018.

In addition, there are serious concerns about China's slower economy and the slowing global economy. Plus, China's wild stock market and yuan devaluation, as well as the volatile swings in most of the world stock markets, have spooked investors. This alone has again boosted the appeal of U.S. government bonds as a favorite safe haven, which is why they've been rising.