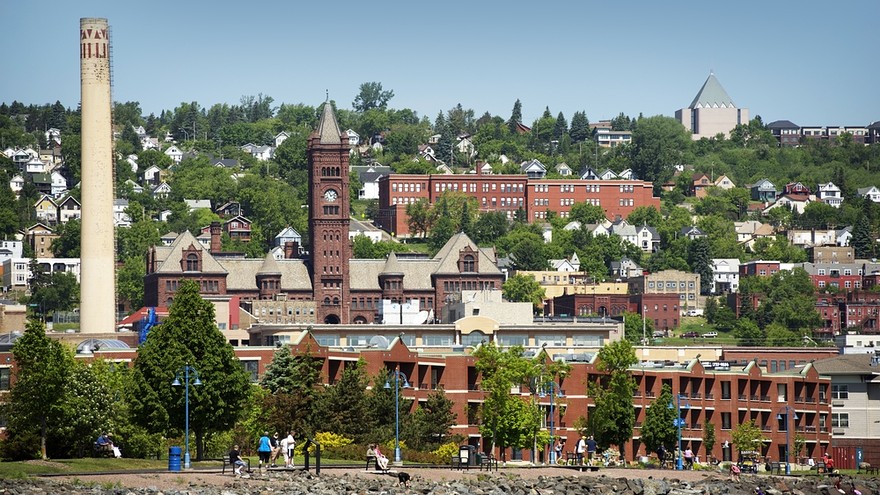 Shutterstock
The downtown lakefront in Duluth.

Retirees generally come to Duluth for Lake Superior and all the outdoor recreation it offers in a climate that never gets too hot. Summertime temperatures near the shore peak in the low 70s, a climate much like the Scandinavian countries where many residents’ ancestors came from. The water in the lake is still chilly even in high summer, but this small city offers plenty to do besides swim. Strong winds can bring out surfers, and retirees who’ve outgrown their surfing days can opt for canoeing, kayaking and fishing. There’s a ski area right in town, too, as well as opportunities nearby for biking, hunting and hiking. And the price—if not the weather—is much more reasonable than on a Florida beach. The cost of living in Duluth is significantly lower than average for the state, and the median home costs just $115,200

Duluth also has a vibrant arts scene spurred by the presence of three local colleges—the College of St. Scholastica, Lake Superior College and the University of Minnesota, Duluth. Duluth has its own symphony orchestra, a ballet company, theater companies and the Tweed Museum of Art, which has a collection of more than 8,000 works, including a core display of works by European and American artists, a collection acquired by the museum’s founder in the early part of the 20th century. The city also sports a variety of relatively unusual ethnic restaurants that reflect the immigrant populations that settled here many decades ago (particularly Scandinavians, who came for timber-related jobs, and Central Europeans drawn to the area by mining), says Gene Shaw, the director of public relations for Visit Duluth.