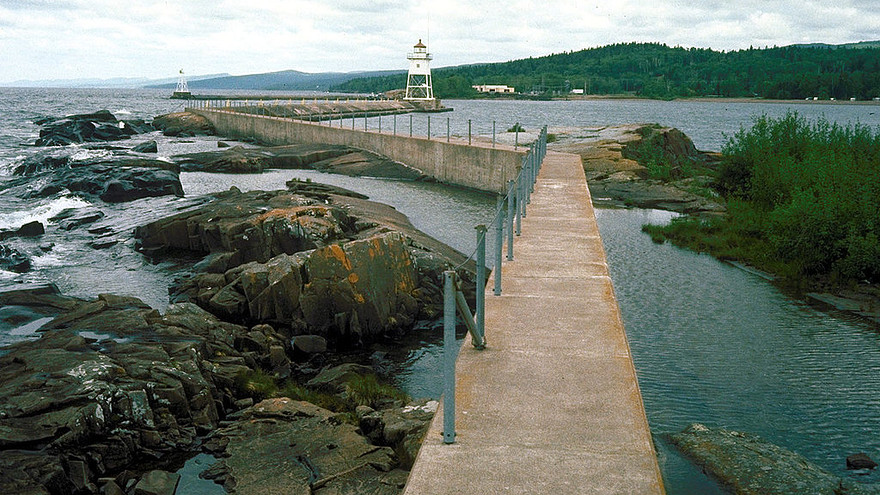 U.S. Army Corps of Engineers
The entrance to the harbor at Grand Marais.

Don Quest, a 65-year-old retired UPS supervisor, and Lois Clay Quest, a 60-year-old retired coffee shop owner, discovered Grand Marais by accident on a group sailing trip when the captain anchored the boat there for a lunch break. “We walked around town and thought, ‘What a cute place,’” Clay Quest says. “We always wanted to come back.” After a bunch of vacation visits, in which they also discovered how much they enjoyed watching dog-sled races, a popular sport here, they decided to move up from St. Louis.

Grand Marais sits between Lake Superior, with its boating and salmon and trout fishing, and the Sawtooth Mountains, a small range with plenty of hiking trails. Not surprisingly, the area has great cross-country skiing trails, and bird-watchers enjoy the more than 200 species that can be found in nearby Superior National Forest. Despite its tiny size—the population is just 1,176—Grand Marais has much to offer in arts and social activities, says Terry Backlund, owner of Grand Marais-based Backlund Realty. The Grand Marais Art Colony—Minnesota’s oldest, dating back to 1947—offers classes in ceramics, printmaking, visual arts and more. For performing arts, there’s community theater at the Grand Marais Playhouse, while the North Shore Music Association puts on a variety of concerts. The North House Folk School has more than 225 arts and crafts courses from basketry to woodworking to weaving; the school is also a community gathering spot for potlucks, dances and live music. The arts organizations provide lots of volunteer opportunities, and the town’s other assets include a brand new YMCA, Backlund says.

The town has several health facilities, including Sawtooth Mountain Clinic and Cook County and North Shore Hospital. But for major surgery and specialty care, residents will need to travel to Duluth, about two hours away. While the nearest major airport is in Thunder Bay, Ontario, 77 miles away, most people fly out of Duluth International Airport or make the five-hour drive to Minneapolis for cheaper fares, Backlund says. Grand Marais’s far northern location and waterfront locale also mean winters are rough, with an average of 50.7 inches of snow annually, double the U.S. average. The Quests, however, find winters to be more beautiful than a hindrance, and with a four-wheel drive vehicle, they can get around easily, Clay Quest says.