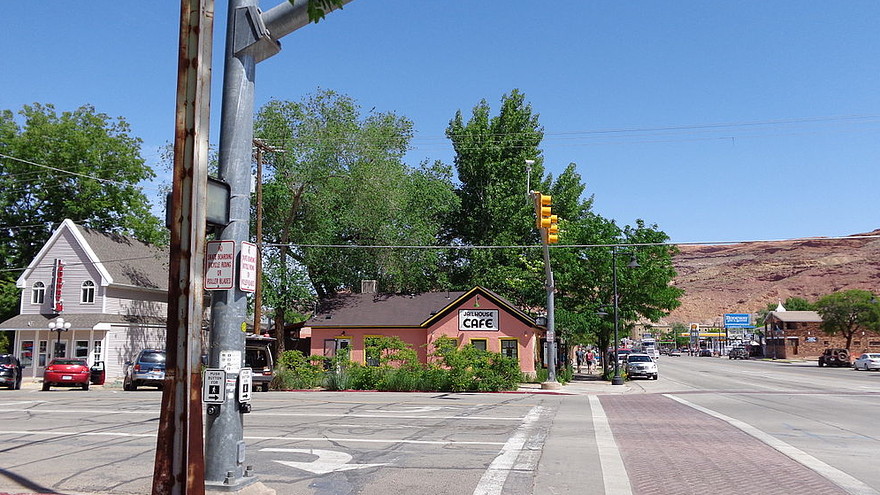 Moab can get crowded with tourists in warmer months because its valley location adjoins spectacular Arches National Park and is also the gateway to Canyonlands National Park, not to mention the many annual outdoor sports events in the area including runs, biking, golf, adventure racing and an annual senior games in November. That natural beauty also has nurtured a world-class restaurant scene and attracted a diverse mix of locals, says Rachel Moody, broker/owner of Real Estate Company of Moab. “People like it because you can take a quiet hike out and be alone, and at the same time it’s a happening town,” she adds. “It’s the best of both worlds.”

That combo of outdoors and culture is what inspired Dwayne Olson, a 55-year-old letter carrier for the U.S. Postal Service in Minneapolis, Minn., to purchase 5 acres of land southeast of town in 2001. He plans to start building his retirement dream house next year—an architect, he has drawn up plans for 2,800 square feet to showcase his art and book collection, have guest rooms for friends and family, and big windows to let in natural light and enjoy the view of the snow-capped LaSalle Mountains. “I loved the scenery in Utah and I love geology—collecting rocks and fossils,” Mr. Olson says. “There are huge fossil areas here, and also a lot of restaurants, a really good bookstore and night life, all the amenities I wanted.”

Another draw for Moab is that it isn’t as conservative as some Utah towns perhaps due to a varied history that includes frontier outlaws, a uranium mining boom in the 1950s and a hippie migration in the 1960s, Olson says. Cultural activities include monthly art walks from March through November; an annual arts festival in late May; the 10-day Moab Music Festival in September featuring chamber music, jazz with a Latin flavor, and global music; a week-long Pride Festival in September; and folk music, Celtic and international film festivals in November. Utah State University also recently opened a campus in Moab. Also, the weather is more temperate than the northern part of the state with 244 sunny days a year, lows falling only to 20ºF in January. Snowfall averages less than six inches annually in the valley.

One downside for some retirees is that the closest big city is about a five hour drive — Salt Lake City to the north, Flagstaff, Ariz., to the southwest or Denver, to the east. Las Vegas and Phoenix are seven to eight hours away, making it as Olson puts it, “in the middle of nowhere, but also in the middle of everything” for retirees who don’t mind driving. Moab does have a small airport with daily flights to Salt Lake City. Moab Regional Hospital is small with just 19 critical access beds but offers general and orthopedic surgical services, as well as heart and pulmonary care.