Rick Santorum is not impressed with the New York Times story on Trump’s taxes — how many voters feel the same way?

Almost two-thirds of Republicans and right-leaning independents say the tax code is fair, according to a Pew survey

“If you have a lot of money, no matter what you do with the tax system, you can always game it. I mean, that’s just the reality of the situation. And Donald Trump’s been very forthright, and I’m sure he will be at the debate, that he does not like paying taxes and he’s going to do everything he can not to pay taxes.” 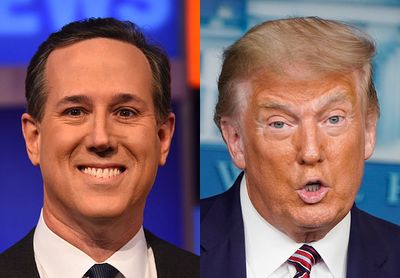 That’s Rick Santorum , a former U.S. Senator, onetime presidential hopeful and Republican commentator on CNN one day after the New York Times story saying President Donald Trump paid a $750 income tax bill in 2016 and in 2017, while paying no income tax in 10 of the 15 years before that.

Trump’s low tax bills were reportedly the result of business losses that, under tax code rules, can offset a taxpayer’s income tax liability.

Though Trump has declined to release his tax returns, the Times story said it obtained the data from sources with “legal access” to the information. During one 2016 presidential debate, Trump said his ability to not pay taxes “makes me smart.”

The story was “a big nothingburger and a pre-debate attack intended solely to help Joe Biden. It ought to be reported as an in-kind contribution to the Biden campaign,” said Tim Murtaugh, a Trump campaign spokesman. The story is “inaccurate as the President has paid tens of millions of dollars in taxes,” Murtaugh added.

What will voters make of the report?

“I don’t see this moving the needle very much,” Karlyn Bowman, a senior fellow studying public opinion at the right-leaning American Enterprise Institute, a think tank that supports lower taxes, told MarketWatch. At this point in the campaign, there are very few undecided voters who may be swayed by a story on Trump’s tax strategies, Bowman said.

Other issues, like the coronavirus pandemic, the economy and a looming U.S. Supreme Court confirmation battle for Judge Amy Coney Barrett may loom much larger in voters’ minds, she noted.

Two-thirds of people polled in July by Reuters and Ipsos thought Trump should release his tax returns, she noted. Still, the issue “doesn’t seem to have a great deal of intensity.”

To be sure, people can get fired up about taxes when it’s framed as a matter of fairness, research suggests. Ninety-five percent of taxpayers said it’s their civic duty to pay taxes, according to an annual IRS survey . That percentage has hovered in a four-point range since at least 2010, the federal tax collector said.

Ninety-six percent of taxpayers told the IRS that there’s no, or very little, acceptable amount of cheating on taxes, which is another number that hasn’t budged all that much in past years. (The Trump campaign says the recent Times story made no allegation of wrongdoing.)

The Times report comes at a moment when Republicans and Democrats are increasingly divided on whether the tax code is fair to begin with.

Democratic nominee Joe Biden’s tax plank is premised on the idea that America’s affluent taxpayers and corporations need to pay more taxes in order to contribute their “fair share.”

“Nowhere in the story, try as they might, does the Times allege that the President did anything wrong,” Murtaugh said in his statement.